A man who fatally stabbed a stranger because he thought the victim was a werewolf was back in court Thursday, as prosecutors are asking a judge to restrict his ability to access dating apps and sites. FOX 5's Sierra Fox reports.

ALEXANDRIA, Va. - A man who fatally stabbed a stranger because he thought the victim was a werewolf was back in court Thursday.

Prosecutors asked a judge to add new rules to Pankaj Bhasin's conditional release to restrict his internet use after he was discovered on dating apps and sites.

As Bhasin transitions back into society, a court filing outlines prosecutors' concerns with how the alleged werewolf killer is deceitfully representing himself online and that it could be potentially putting people in danger. 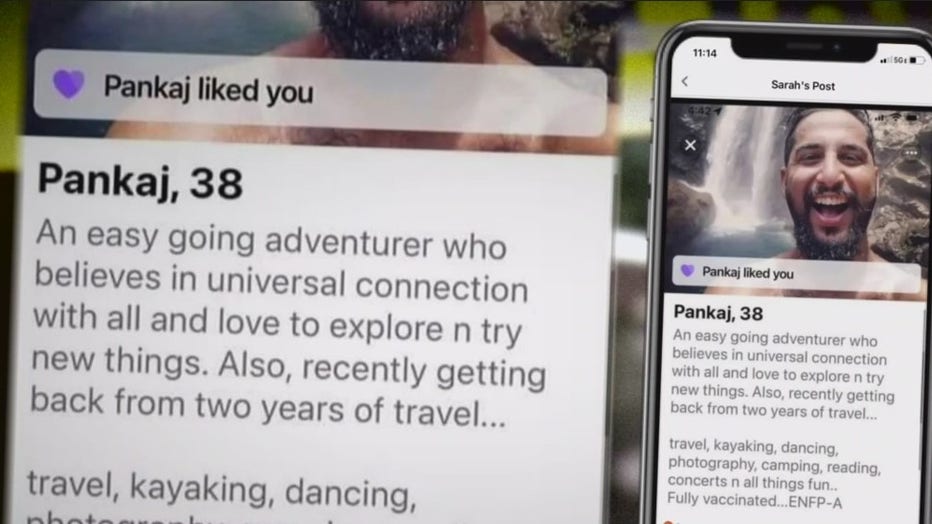 Bhasin, 38, is hoping to date again after spending the last three years at a mental health facility.

However, according to court documents his since-deleted Facebook dating profile includes lies stating he recently got back from two years of travel.

FOX 5 questioned Bhasin and his attorney about that as they were leaving the Alexandria, Virginia courthouse.

Back in 2018, 65-year-old Brad Jackson was managing a window store in Old Town Alexandria when he was allegedly stabbed more than 50 times by Bhasin because he thought the victim was a werewolf.

During trial, the defense argued Bhasin was suffering from a psychotic breakdown. He was found not guilty by reason of insanity.

When Sarah Bryen, a friend of the victim, saw Bhasin describing himself as an "easy-going adventurer" online, she posted a warning for women who may not realize they could be getting romantically involved with a killer.

RELATED: Mistrial declared in case of man who allegedly killed victim in Virginia he thought was a werewolf

"Frankly, dating is already scary enough, definitely don't need that," Bryen said. "I don’t understand how he can possibly say he’s remorseful then do this."

A judge decided that Bhasin can no longer use social media, but he can have a Linkedin account. His attorney fought for that platform, stating it would be beneficial for potential future employment opportunities.

Bhasin is currently required to take medication, wear a GPS monitor, and get home visits from mental health workers.