Waukesha officials confirm five people are deceased and more than 40 hurt after an SUV driver sped through a police line and into a parade.

WAUKESHA, Wis. - Waukesha officials confirm five people are deceased and more than 40 hurt after an SUV driver sped through a police line and into a parade of Christmas marchers on Sunday, Nov. 21. The horrifying scene was captured by the city’s livestream and the cellphones of onlookers.

Waukesha Police Chief Dan Thompson said late Sunday a person was in custody, but he did not give any indication of motive.

The city has indicated in a tweet that when the area is open, any items for a temporary memorial be placed at Veterans Park in Waukesha. They also said, "Many people witnessed traumatic events this evening. If you need to talk with someone, please call 211."

"We are deeply saddened by today’s senseless tragedy and our hearts are with the Waukesha community. We are currently treating 13 patients - 3 are in critical condition, 4 in serious condition, 6 in fair condition. We are praying for all those impacted, their families and our first responders."

The Archdiocese of Milwaukee issued this statement:

"Our prayers are with the people who have been injured and killed during the tragic incident in Waukesha.

Among the injured are one of our Catholic priests, as well as multiple parishioners and Waukesha Catholic school children.

Please join us in prayer for all those involved, their families, and those who are traumatized from witnessing the horrible scene."

Waukesha Police Chief Dan Thompson said "some" people were killed when an SUV driver sped through a police line and into a parade of Christmas marchers on Sunday but would not give an exact number. A person was in custody, he said, but he did not give any indication of motive.

One video shows a woman screaming, "Oh my God!" repeatedly after a group of girls wearing Santa hats and dancing with white pompoms is struck. Another shows the SUV plowing into members of a marching band, their music replaced with terrified screams

Fire Chief Steven Howard said 11 adults and 12 children were injured and transported to hospitals by his department. It was unknown how many people were taken to hospitals by others. Children’s Hospital of Wisconsin said it received 15 patients from the parade and no reported fatalities as of 8 p.m.

Police also had custody of the vehicle, Thompson said. The investigation was ongoing, with assistance from the Wisconsin Department of Justice. 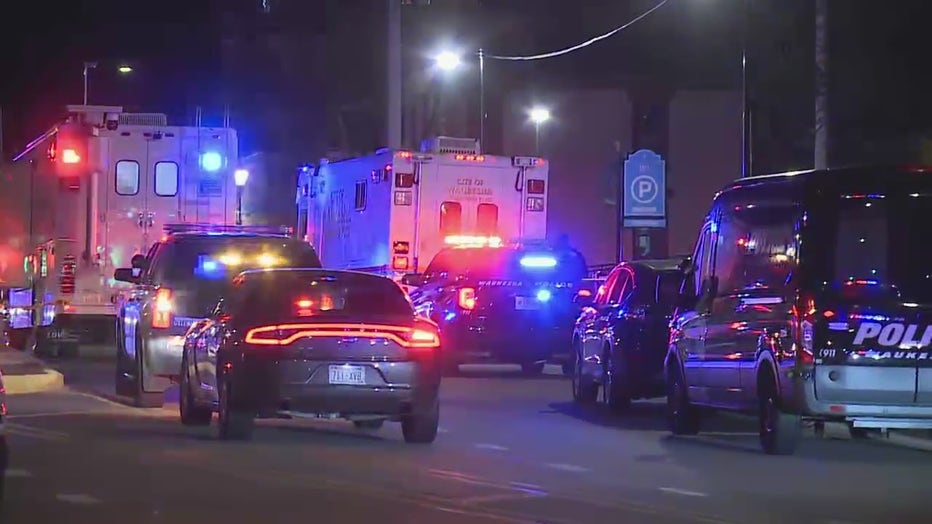 "What took place in Waukesha today is sickening, and I have every confidence that those responsible will be brought to justice," tweeted the state's top law enforcement officer, Attorney General Josh Kaul.

As the SUV broke through barricades, a Waukesha police officer fired his gun in an attempt to stop the vehicle, Thompson said. No bystanders were injured and Thompson said he did not know if the driver was struck by the officer's bullets. 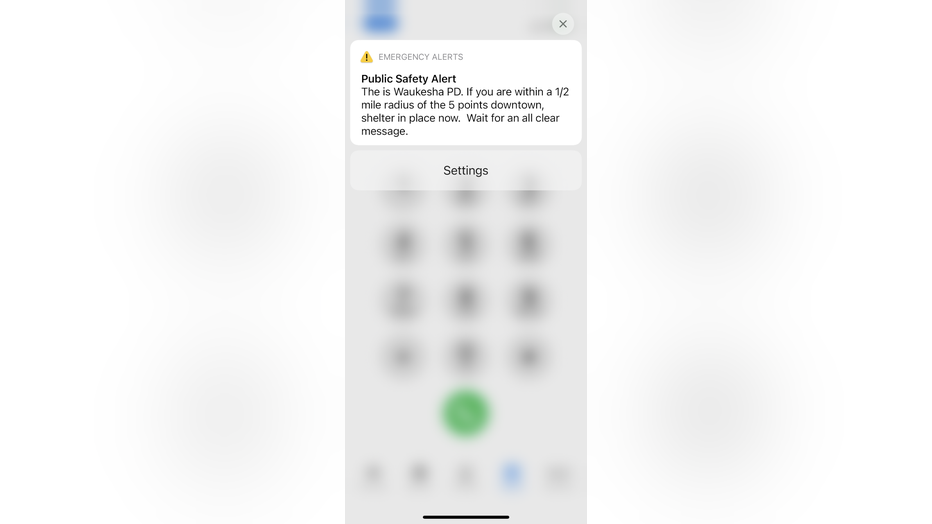 One video shows the moment the SUV broke through the barricades and the sound of what appears to be several gunshots.

The video taken when the pompom dancers got struck ends with a group of people tending to one of the girls who is on the ground. 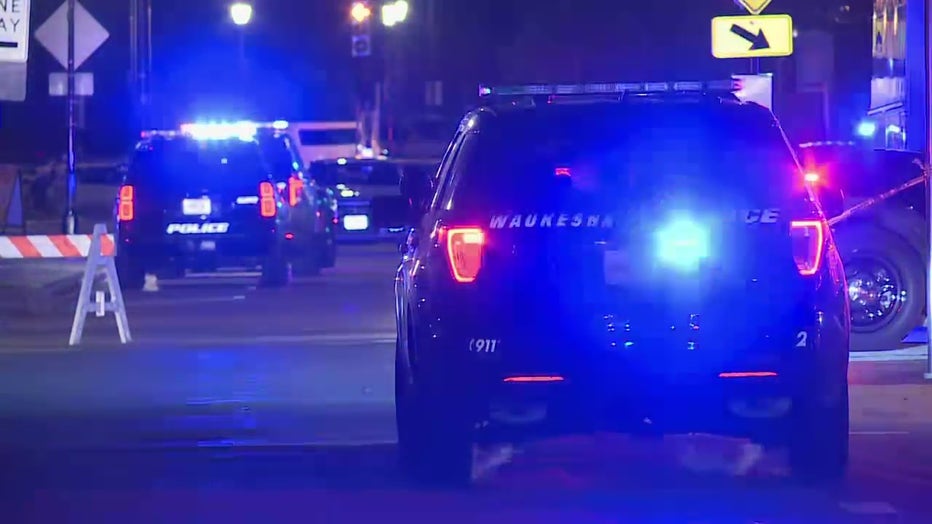 One entry in the parade, the Milwaukee Dancing Grannies, posted on its Facebook page that "members of the group and volunteers were impacted and we are waiting for word on their conditions." The group’s profile describes them as a "group of grannies that meet once a week to practice routines for summer and winter parades."

Chris Germain, co-owner of the Aspire Dance Center studio, had about 70 girls in the parade ranging from as young as 2 being pulled in wagons to age 18. Germain, whose own 3-year-old daughter was in the parade, said he was driving at the head of their entry when he saw a maroon SUV that "just blazed right past us." A police officer came by on foot chasing after, he said. Germain said he jumped out of his own SUV and gathered the girls who were with him.

An SUV driver sped through a police line and into a parade of Christmas marchers on Sunday, hitting more than 20 adults and children. One video shows a woman screaming, "Oh my God!" repeatedly after a group of girls wearing Santa hats and dancing with white pompoms is struck. Another shows the SUV plowing into members of a marching band, their music replaced with terrified screams.

"There were small children laying all over the road, there were police officers and EMTs doing CPR on multiple members of the parade," he said.

Angelito Tenorio, a West Allis alderman who is running for Wisconsin state treasurer, said he was watching the parade with his family when they saw the SUV come speeding into the area.

"Then we heard a loud bang," Tenorio said. "And after that, we just heard deafening cries and screams from the crowd, from the people at the parade. And people started rushing, running away with tears in their eyes crying."

Gov. Tony Evers said he and his wife, Kathy, were "praying for Waukesha tonight and all the kids, families, and community members affected by this senseless act."

Waukesha County Executive Paul Farrow, who was at the parade but left just before the incident, called it "an unspeakable tragedy, affecting us all as we work to overcome an extremely challenging two years and resume our cherished holiday traditions."

The parade is sponsored by the city’s Chamber of Commerce. This year’s edition was the 59th of the event that’s held each year the Sunday before Thanksgiving.

School District of Waukesha officials canceled school for students Monday, issuing the letter below to families:

Several of our administrative staff and principals met this evening following the tragic event that occurred at the City of Waukesha Christmas Parade.  At this time, we are working with the police department to more fully comprehend all of the tragic details of this unfortunate event.

As a result of this situation, school will be canceled on Monday, November 22, 2021, for all students in grades 4K - 12.  Additionally, the District will have additional counselors available during the school day at all buildings for all students that may be in need of support services.

A decision on school for Tuesday will be determined during the day on Monday.  Our thoughts are with everyone impacted, with all who witnessed the event, and with our entire community.

Additionally, Carroll University canceled classes for the week in the wake of this tragedy.

Waukesha Christmas parade tragedy, sympathy for Wisconsin from around the world

There are prayers for Waukesha from around the world after an SUV driver sped through a police line and into a parade of Christmas marchers on Sunday, hitting more than 20 adults and children.

A White House official issued this statement: "The White House is closely monitoring the situation in Waukesha and our hearts go out to everyone who has been impacted by this terrible incident. We have reached out to state and local officials to offer any support and assistance as needed."

Help for those impacted

The Salvation Army of Wisconsin and Upper Michigan was called out by emergency officials to provide food and hydration to first responders and community members. Chaplains were also on scene providing emotional and spiritual care.

The police chief late Sunday announced a family reunification center set up at Waukesha South High School and a hotline number for those looking for family members: 262-548-7122.