America’s bird is the master of the skies and large bodies of freshwater, apparently.

A kayaker spotted a bald eagle gracefully swimming across Sebago Lake near Standish, Maine, on August 6.

Michael Zurbuch was taking a break during his morning kayak ride when he saw the bird swoop down into the water and began to swim in a ‘butterfly stroke’ across the lake.

Video recorded by Zurbuch shows the eagle making great strides as it journeyed across the water’s calm surface. 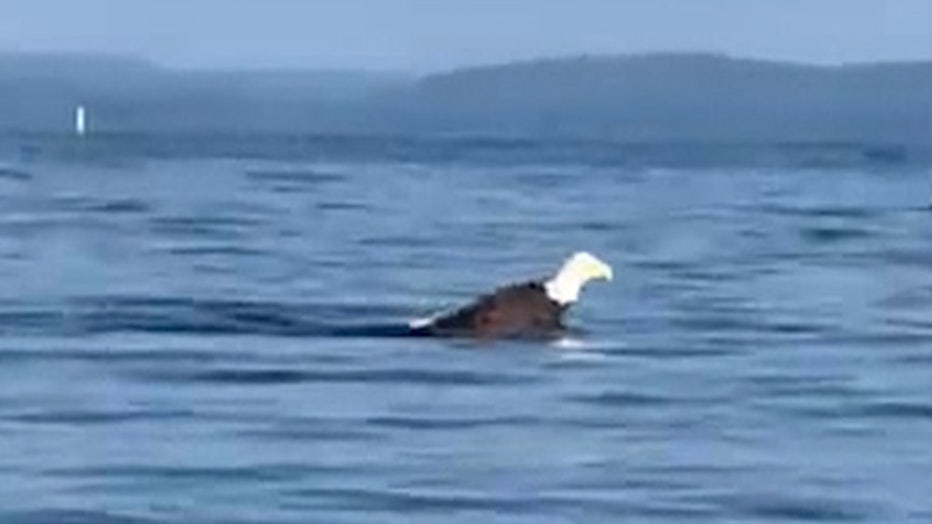 Freeze frame from video showing a bald eagle swimming across a lake in Maine. (Michael Zurbuch via Storyful)

The eagle ultimately reached the shore, climbed on a rock, and turned back around to look at him, Zurbuch said.

Bald eagles typically nest in forested areas near large bodies of water, according to Allaboutbirds.org. They have a diet consisting of mostly fish but are also known to eat other birds, reptiles, amphibians, invertebrates such as crabs, and mammals including rabbits and muskrats.

Interestingly, while bald eagles prefer to hunt for live prey, they also like to steal prey from other predatory birds and even some mammals.

The bald eagle used to be endangered but has since flourished and increased in numbers after being put under federal protection.

And yes, they have even been known to swim from time to time, even dragging fish to shore with them.

Storyful contributed to this report. This story was reported from Los Angeles.