Washington, D.C., Attorney General Karl Racine announced the lawsuit Tuesday, alleging that Juul’s viral marketing contributed to the surge in underage vaping by teens in the district and across the U.S.

The lawsuit also says that Juul misled consumers about the potent nicotine levels contained in its flavored pods.

A Juul spokesman said Tuesday the company’s products are intended for adults and that it is committed to combating underage vaping.

Under intense legal pressure, Juul recently suspended its U.S. advertising and halted sales of all but two of its flavors, menthol and tobacco. Additionally, the company closed its social media accounts, tightened age verification for online sales and replaced its CEO.

Juul, which launched in 2015, now controls roughly two-thirds of the U.S. retail market for e-cigarettes. The company also faces separate investigations by Congress, the FDA and other federal regulators.

Juul rocketed to the top of the vaping market based on the popularity of its high-nicotine pods, fruit and dessert flavors and early online marketing, which featured youthful, attractive models. 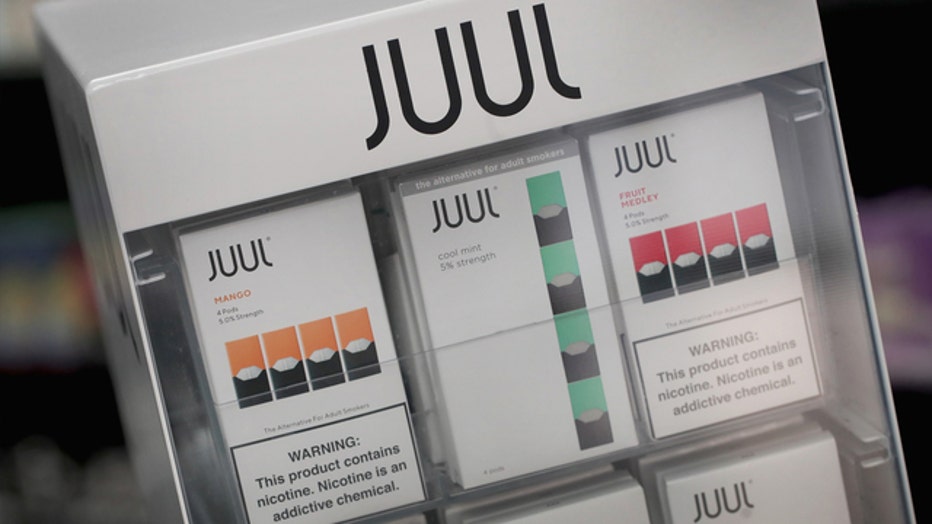 Electronic cigarettes and pods by Juul, the nation's largest maker of vaping products, are offered for sale at the Smoke Depot on September 13, 2018 in Chicago, Illinois. The Food and Drug Administration (FDA) has ordered e-cigarette product makers t (Scott Olson/Getty Images)

— made unsupported claims that its e-cigarettes are a safer alternative to traditional smoking,

— failed to adequately verify customers’ ages before selling e-cigarettes through its website, and

— failed to implement a “secret shopping” program and other steps touted by the company to deter underage use.

The district also said it sent subpoenas to eight other vaping companies seeking information about their business and marketing practices.

Underage vaping has reached what health officials call epidemic levels. In the latest government survey, 1 in 4 high school students reported using e-cigarettes in the previous month, despite federal law banning sales to those under 18.

E-cigarettes, which have been available in the U.S. since about 2007, have grown into a multi-billion-dollar industry with little government regulation. The battery-powered devices typically heat a solution that contains nicotine, the drug that makes cigarettes and e-cigarettes addictive.

Most experts say vaping is likely less harmful than traditional smoking, which produce thousands of toxic chemicals. But there is little research on the long-term health effects of vaping.