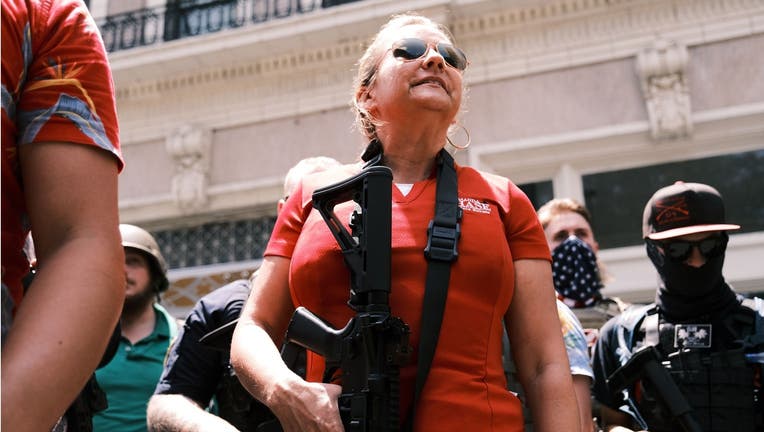 RICHMOND, Va. - A Virginia state senator and gubernatorial candidate who reportedly applauded many of those involved in the Capitol riot was rebuked on Wednesday by her peers for what they described as a "pattern of unacceptable conduct."

Amanda Chase (R-Chesterfield) has made headlines in recent months as a vocal advocate for former President Donald Trump, and reportedly claimed antifa infiltrators were responsible for the attack on the U.S. Capitol that led to five deaths.

On a vote of 24-9, three Republicans joined the chamber's Democrats in advancing a resolution censuring Chase.

The vote followed a long debate that featured scathing rebukes from Chase's colleagues on both sides of the political aisle. Chase then launched into a series of personal and professional attacks on fellow senators, noting that some of them have had their own behavioral and legal troubles in the past. She also threatened to file a lawsuit if they voted in favor of the censure.

"You have the audacity to stand on the floor of this Senate and condemn me? How dare you!" she said, her voice rising. "Don’t you think the timing of today's censure is lost on me when two other Republican candidates announced that they are running for governor yesterday and today."

Sen. John Bell, a Democrat who sponsored the resolution, said Chase's behavior had put "the honor of our institution at risk."

"The question before us today is, where is our line of behavior drawn and what will we tolerate?" Bell said.

Bell previously said he had private meetings with Chase in which they agreed he would drop the resolution if she publicly apologized and gave an unconditional condemnation of the violent riot at the Capitol on Jan. 6 by supporters of then-President Donald Trump.

But Bell said a rambling speech Chase gave on Friday did not live up to that agreement.

In remarks on the floor earlier in the month, Chase defended Ashli Babbitt, a woman who was shot by U.S. Capitol Police during the insurrection. Chase herself is one of many state lawmakers from around the country who attended a rally with Trump shortly before the attack on the Capitol, but she was not part of the group that later stormed the building.

"We remember Ashli, and the three who died of medical emergencies and the Capitol Police officer who died during the chaos at the Capitol. These were not rioters and looters, these were patriots who love their country and do not want to see our great republic turned into a socialist country," she said at the time.

On Wednesday, Chase sought to clarify those remarks, saying that when she referred to some participants as "patriots," she meant people she was standing with "before all the mayhem took place," including veterans and police officers.

She said all of the allegations against her in the censure bill describe speech that is protected by the First Amendment.

"Speech that some do not approve of is not grounds for censure," she said.

Chase, an ardent supporter of Trump, has previously called for martial law to overturn the results of the 2020 presidential election.

Bell scaled back his resolution, which initially charged Chase with "fomenting insurrection against the United States," or helping to incite the attack on the Capitol.

The new version alleges that Chase has displayed a "pattern of unacceptable conduct." It says she "has exhibited conduct unbecoming of a Senator during her terms in office by displaying a disregard for civility in discourse with colleagues, making false and misleading statements both in committee and on the Senate floor, and displaying a disregard for the significance of her duty to the citizens of the Commonwealth as an elected representative in the Senate of Virginia."

Specifically, it cites a 2019 confrontation between Chase and a Virginia state Capitol Police officer, and alleges that Chase has "undermined the seriousness of the pandemic by stating, ‘I don’t do COVID.'" Chase has refused to wear a mask on the Senate floor, saying she has an unspecified medical condition that prevents her from doing so.

Sen. Stephen Newman called it "an ugly day for the Senate of Virginia" and said Chase’s behavior was embarrassing and appears to represent "a bit of a call for help."

Sen. Tommy Norment suggested Chase needed to focus on her own "emotional and mental well-being."

The censure is a public rebuke but will not limit Chase’s participation in the Senate. The upper chamber has already stripped her of her committee assignments.

The leaders of the Senate Republican caucus — which Chase left in 2019 — issued a statement saying their members were "guided by their consciences" on the vote but "united in their disappointment in Senator Chase and their disdain for her actions." Six Republicans did not vote on the measure.

"While we remain hopeful today’s action discourages the frequent disruptions and distractions fomented by Senator Chase, the experience of our caucus suggests otherwise," the statement said. "We sincerely hope this is the exceptional circumstance where Senator Chase exceeds our expectations."