FOX 5's Tisha Lewis explains that firefighters at the The Occoquan-Woodbridge-Lorton Volunteer Fire Department are now carrying kits that will help them treat patients with Autism Spectrum Disorder.

NORTHERN VIRGINIA - Firefighters in Northern Virginia are leading the way, adding an important tool to help crews during encounters with people who have autism.

The Occoquan-Woodbridge-Lorton Volunteer Fire Department is the first fire department on the East Coast to carry Ben’s Blue Bags.

EMT Brooke Smith, who suggested the idea to her boss about taking these autism awareness kits out on calls, says one presentation and one week later, it was a go and their colleague shared information about Ben’s Blue Bags, a nonprofit organization based in Indiana.

Now, the Ben’s Blue Bags are on more than a dozen fire trucks at OWL VFD, but it’s what’s inside the bags that are so important. 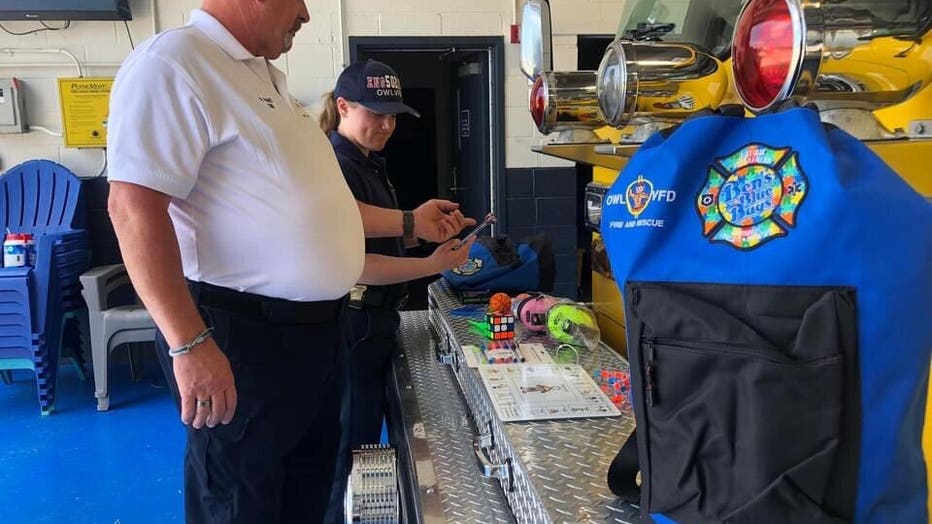 Autism awareness kits with assorted sensory items that can be used while treating patients with Autism Spectrum Disorder.

He was inspired to start the nonprofit in honor of his son, Ben, who has autism.

The Occoquan-Woodbridge-Lorton Volunteer Fire Department cites a 2018 CDC study, indicating approximately one in 59 children are diagnosed with Autism Spectrum Disorder, many have some type of sensory process disorder.

While many responders carry items including stickers and stuffed animals in their trucks, more was needed.

The items in Ben’s Blue Bag can also help children in situations where a parent or relative needs assistance.

The department ordered 16 bags for $75 each.

Its 200 members underwent a two-day training on how to use the items.  The bags are not just for children, they also can help adults going through a stressful event.