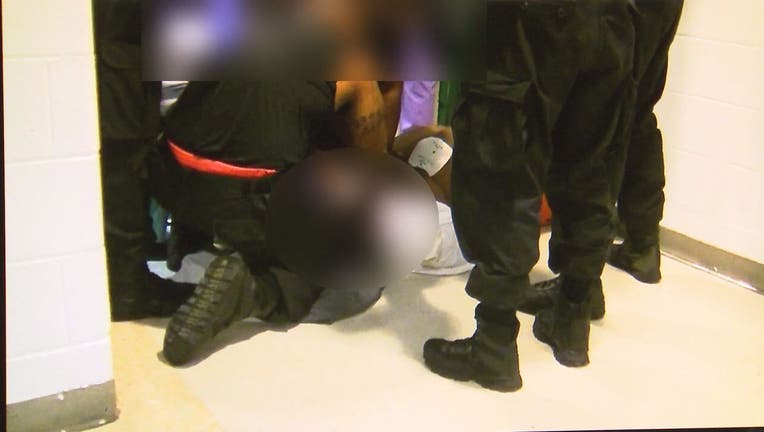 WASHINGTON - A widow is claiming video from a Prince George's County jail is raising more questions about how her husband died while he was in custody.

It has been two years since the death of 49-year-old Samuel Shields and his family told FOX 5 they still don't have justice.

This video was shot back in June 2014 by a corrections officer inside the jail. Shields' wife, Regina, released the video to FOX 5 on Monday after she obtained it from the county.

She alleges her husband was beaten to death by correction officers while he suffered a schizophrenic episode.

Earlier in the day, Samuel Shields was arrested for getting on Metrobus without paying the fare.

In the video taken recorded inside the jail, you can hear the wails of Shields screaming "murder." Officers are seen repeatedly speaking into the camera contending the detainee was combative and refused to put on his jumpsuit. But what you don't see in the video is what is happening inside a room Shields was in.

You can hear screams, cries and demands from the officers to Shields and he is eventually pulled out from the room unresponsive. For nearly 30 minutes, officers and EMTs perform CPR, but Shields would later die.

"They just beat him," Regina Shields told FOX 5. "First, they started hitting him to make him move to go into the room. He went into the room and then it started getting sounds of choking him, stepping on the chest. He even told them that they knew he had health problems and stuff and they sprayed him again. Even an officer acknowledged that he had health problems with asthma or something with spraying him. You just hear loud strikes. You hear him hollering out 'murder.' You hear him hollering out 'Jesus.'"

She also said, "I really believe it was unfair. I felt they didn't have no remorse in their heart for anybody. If this type of thing goes on in jail all the time, I mean, he only went there one day. I can imagine the people that are in there for years and life, you know? And he was a good person ... Him and his right self would have never done that. I know the type of person he is. He would have never gone on Metro and not paid. I knew something had to be wrong."

On the one-year anniversary of his death, Regina Shields filed a lawsuit against the county for her husband's death despite the medical examiner maintaining Shields died from natural causes.

We reached out to the jail for comment, but have yet to hear back.