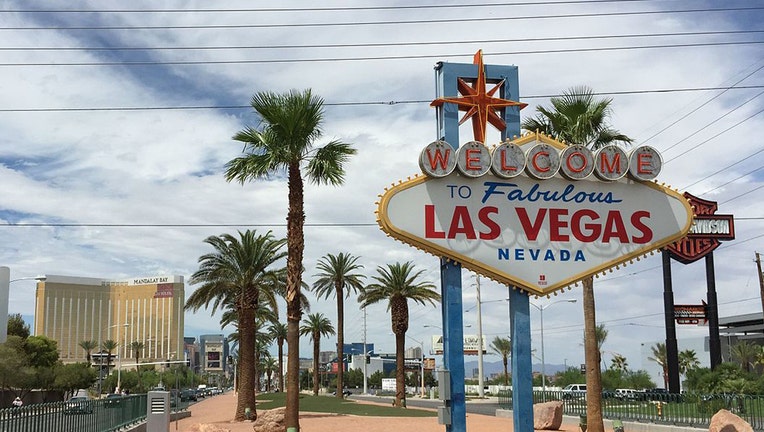 LAS VEGAS - A man who authorities say worked as a security guard has been arrested and accused of plotting to firebomb a Las Vegas synagogue or a bar catering to LGTBQ customers, officials said Friday.

Court documents say Climo communicated by encrypted internet chat with people identified as white supremacists, and told an FBI informant in recent weeks that he was scouting places to attack.

"Threats of violence motivated by hate and intended to intimidate or coerce our faith-based and LGBTQ communities have no place in this country," Trutanich said.

Documents point to a 2016 news report by KTNV-TV in Las Vegas about Climo patrolling his neighborhood wearing battle gear and carrying an assault rifle and survival knife. He shows and describes to a reporter the four, 30-bullet ammunition magazines he is carrying.

Neighbors expressed concern, but Climo was not arrested at that time.

Trutanich said Climo was arrested Thursday after a probe involving at least one undercover online contact and an FBI confidential informant who reported that Climo "discussed, in detail, how to build a "self-contained Molotov" incendiary device.

Investigators serving a warrant at his home found hand-drawn schematics and component parts of a destructive device, according to the criminal complaint, including flammable liquids, oxidizing agents and circuit boards. They also confiscated an AR-15 assault-style weapon and a bolt-action rifle.

The charge against Climo accuses him of possessing an unregistered firearm in the form of the component parts of a destructive device.

"Climo would regularly use derogatory racial, anti-Semitic and homosexual slurs," the U.S. attorney's office statement said. "He discussed attacking a Las Vegas synagogue and making Molotov Cocktails and improvised explosive devices, and he also discussed conducting surveillance on a bar he believed catered to the LGBTQ community."