Romney's vote is a move highlighting how rare it is for Republicans to cross swords with this president.

WASHINGTON (AP) - Republican Mitt Romney, establishment to the core, took the Senate's most brazenly rebellious stance Wednesday in voting to force President Donald Trump from office, a move highlighting how rare it is for Republicans to cross swords with this president.

By voting to convict Trump for abusing presidential powers, the Utah lawmaker became the only Republican to cross party lines in the Senate impeachment trial's climactic votes acquitting the president. All Democrats voted to convict Trump on both counts against him.

In a remarkable spectacle, Romney's decision meant the GOP's unsuccessful 2012 presidential nominee had voted to oust a Republican president who seldom hides his contempt for the well-mannered party elders that the patrician Romney symbolizes.

As Trump plunges into his reelection effort, Romney's move denied Trump a campaign talking point of asserting he had been unanimously acquitted by Republicans in a strictly partisan drive to remove him. In fact, House Speaker Nancy Pelosi, D-Calif., used Romney's vote to tout the Senate's “bipartisan vote to convict him."

It also stood as the most noteworthy vote of defiance against Trump by a congressional Republican since 2017. At that time, Sen. John McCain, R-Ariz., aimed his thumb downward in a post-midnight roll call that derailed Trump's signature effort to dismantle President Barack Obama's health care law.

In an early hint of the wrath that may be coming Romney's way, White House press secretary Stephanie Grisham released a statement saying “only the President’s political opponents – all Democrats, and one failed Republican presidential candidate – voted for the manufactured impeachment articles.”

Romney's vote drew praise from a quarter that won't help him regain any affection at the White House: Rep. Adam Schiff, D-Calif., who led the House impeachment investigation of Trump.

“I have great respect for the moral courage that he showed,” Schiff told The Associated Press. 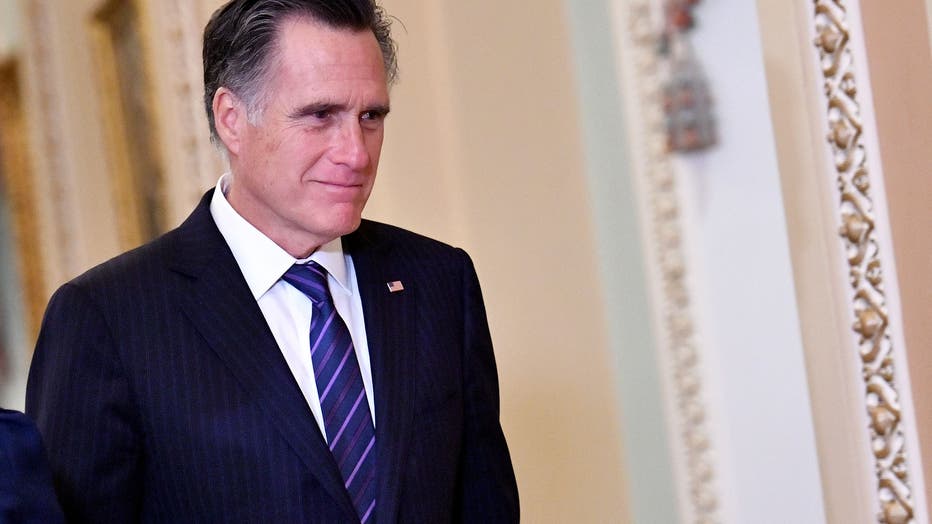 “He showed you can stand up to this president,” Schiff added. "And you can put truth and right and decency first, and I think that the ripple effect of that we may not be able to see for some time, but it will affect all of us.”

The abuse of power count that Romney backed was based on allegations that Trump delayed U.S. military aid to Ukraine for its war with Russian-backed fighters until the embattled country's new leaders agreed to investigate Joe Biden, a Trump political rival.

Romney joined all other Republicans in opposing the second impeachment article, which accused Trump of obstructing Congress' investigation of his actions toward Ukraine.

In an interview on Fox News, Romney said he believed the Democratic-run House should have exhausted all legal remedies for hearing witnesses and receiving documents, which Trump blocked, before impeaching him for obstruction.

Romney announced his decision during an eight-minute speech on the Senate floor two hours before the GOP-dominated chamber voted to absolve Trump. Romney cited the significance of the impeachment oath to render “impartial justice” sworn to by all senators.

“I am profoundly religious. My faith is at the heart of who I am,” Romney, a Mormon, said before pausing for about 11 seconds, seemingly struggling with his emotions.

“The grave question the Constitution task senators to answer is whether the president committed an act so extreme, so egregious, that it rises to the level of a high crime and misdemeanor,” Romney said. “Yes, he did.”

Romney's decision to break with his colleagues recalled the willingness of his own father, the late Michigan Gov. George Romney, to support the civil rights movement in the early 1960s.

Assessed from a personal level, the clash between Trump and Romney came as little surprise. The two men have traded insults at times since Trump began his presidential campaign in 2015.

Still, it threatened to expose Romney to the kind of demonization experienced by recent GOP lawmakers defying Trump. Republican Sens. Jeff Flake of Arizona and Bob Corker of Tennessee both decided against seeking reelection in 2018 after criticizing Trump.

The chairwoman of the Republican Party took umbrage with Romney in an email sent to reporters headlined, “Romney turns his back on Utah.”

“This is not the first time I have disagreed with Mitt, and I imagine it will not be the last,” tweeted Ronna McDaniel, who is Romney's niece. “The bottom line is President Trump did nothing wrong, and the Republican Party is more united than ever behind him.”

While other GOP criticism seemed certain to follow, Romney seemed likely to suffer little blowback back home. Trump and his frequently coarse displays are not strongly popular in the overwhelmingly Mormon Utah, but Romney is. And at 72 and in the second year of his six-year Senate term, Romney is unlikely to face a political challenge there anytime soon.

On the Senate floor, Romney cited the pressure Trump put on Ukraine, a U.S. ally.

“The president's purpose was personal and political,” said Romney. “Accordingly, the president is guilty of an appalling abuse of public trust.”

He called Trump's effort “a flagrant assault on our electoral rights, our national security and our fundamental values.”

Romney said he's received “numerous” phone calls and text messages demanding that he “stand with the team.” But he said if he voted against his belief that Trump was guilty, it would “expose my character to history's rebuke and the censure of my own conscience.”

Romney opposed Trump's presidential bid early on, saying he lacked the temperament and judgment to be president, calling him “a phony, a fraud.” Trump has called Romney a “pompous ass.” Trump interviewed Romney as a potential secretary of state, only to reject him.

Romney has backed Trump in Senate votes 80% of the time, one of the lowest marks for Republicans, according to the website fivethirtyeight.com. Romney has opposed Trump on high-profile issues such as Trump's attempt to unilaterally shift federal dollars to building a wall along the Mexican border.