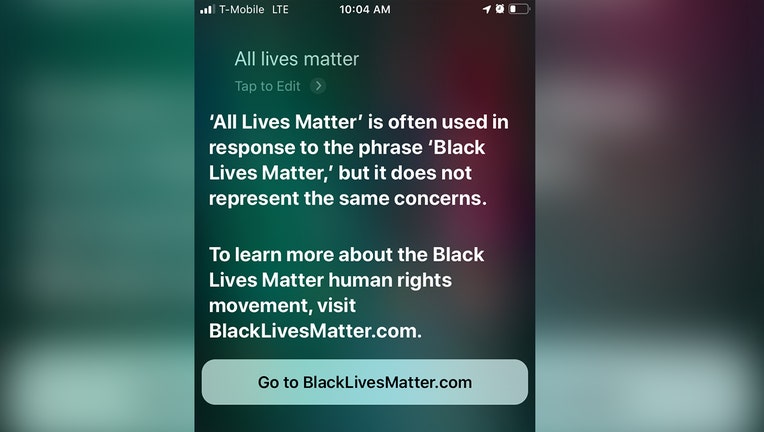 When speaking the phrase to Siri, the service responds, “‘All Lives matter’ is often used in response to the phrase ‘Black Lives Matter,’ but it does not represent the same concerns. To learn more about the Black Lives Matter human rights movement, visit BlackLivesMatter.com.”

Siri then provides a link to the BlackLivesMatter.com website. Apple has not yet responded to a request for comment on the update to Siri.

“I’m here today to ask you to make it stop. Stop the pain,” Philonese Floyd said.

The update follows recent moves and initiatives by businesses and organizations to show support and solidarity for the Black Lives Matter movement in the wake of the global protests following the death of George Floyd during an encounter with police in Minneapolis on May 25.

The update also comes around the same time as growing calls for police reforms, which some cities and states have already begun amid the ongoing protests.

On June 11, Apple CEO Tim Cook tweeted a video message announcing Apple’s Racial Equity and Justice Initiative, in which the company made a $100 million commitment.

Apple has made previous updates to its Siri service in response to global news and trends. In March, near the beginning of the pandemic, Siri started to provide answers to questions regarding COVID-19 symptoms.

RELATED: Siri can now respond to questions about COVID-19 symptoms on Apple devices

Twitter, another tech giant, is testing a feature on Android devices that recommends that users read an article before sharing it in efforts to help curb the spread of misinformation.

RELATED: Twitter testing prompt that asks people to read articles before retweeting them