President Joe Biden said Islamic State leader Abu Ibrahim al-Hashimi al-Qurayshi exploded a bomb that killed him and members of his family during a U.S. special forces raid in Syria on Feb. 3, 2022.

The raid targeted Abu Ibrahim al-Hashimi al-Qurayshi, who took over as head of the militant group on Oct. 31, 2019, just days after leader Abu Bakr al-Baghdadi died during a U.S. raid in the same area. A U.S. official said he died as al-Baghdadi did, by exploding a bomb that killed himself and members of his family, including women and children, as U.S. forces approached.

The operation came as IS has been trying for a resurgence, with a series of attacks in the region, including an assault late last month to seize a prison in northeast Syria holding at least 3,000 IS detainees, it’s boldest operation in years.

"Thanks to the bravery of our troops this horrible terrorist leader is no more," Biden said. He said al-Qurayshi had been responsible for the prison strike, as well as genocide against the Yazidi people in Iraq in 2014.

U.S. special forces landed in helicopters and assaulted a house in a rebel-held corner of Syria, clashing for two hours with gunmen, witnesses said. Residents described continuous gunfire and explosions that jolted the town of Atmeh near the Turkish border, an area dotted with camps for internally displaced people from Syria’s civil war.

Biden said he ordered U.S. forces to "take every precaution available to minimize civilian casualties," adding that was why they chose not to conduct an airstrike on the home.

First responders reported that 13 people had been killed, including six children and four women.

Biden, along with Vice President Kamala Harris and senior national security aides monitored a live-feed of the operation from the White House Situation Room according to an official.

The operation marked a military success for the United States at an important time after setbacks elsewhere — including the chaotic Afghanistan withdrawal — have led allies and opponents to conclude U.S. power globally was weakening.

The house, surrounded by olive trees in fields outside Atmeh, was left with its top floor shattered and blood spattered inside. A journalist on assignment for The Associated Press and several residents said they saw body parts scattered near the site. Most residents spoke on condition of anonymity for fear of reprisals.

"The mission was successful," Pentagon press secretary John Kirby said in a brief statement. "There were no U.S. casualties."

Idlib is largely controlled by Turkish-backed fighters but is also an al-Qaida stronghold and home to several of its top operatives. Other militants, including extremists from the rival IS group, have also found refuge in the region.

"The first moments were terrifying; no one knew what was happening," said Jamil el-Deddo, a resident of a nearby refugee camp. "We were worried it could be Syrian aircraft, which brought back memories of barrel bombs that used to be dropped on us," he added, referring to crude explosives-filled containers used by President Bashar Assad’s forces against opponents during the Syrian conflict. 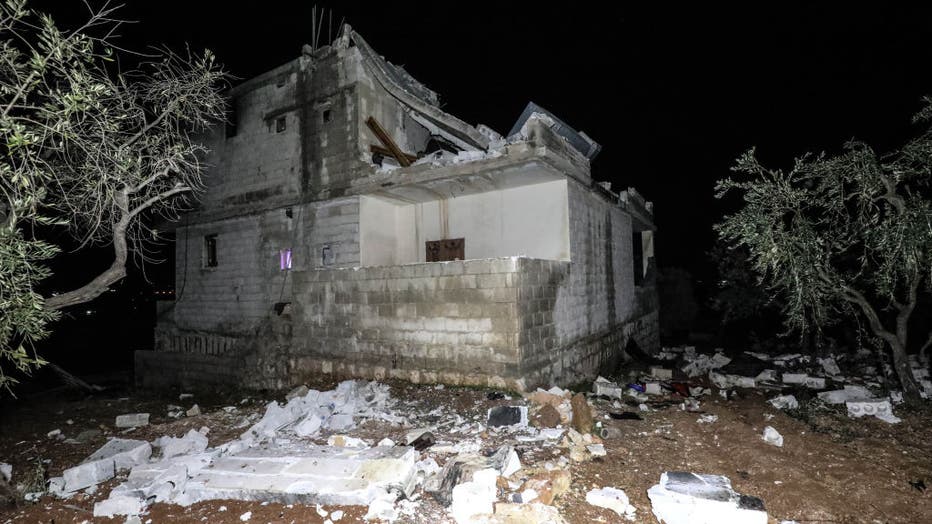 The top floor of the low house was nearly destroyed; a room there had collapsed, sending white bricks tumbling to the ground below.

Blood could be seen on the walls and floor of the remaining structure. A wrecked bedroom had a child’s wooden crib and a stuffed rabbit doll. On one damaged wall, a blue plastic baby swing was still hanging. Religious books, including a biography of Islam's Prophet Mohammad, were in the house.

Al-Qurayshi had kept an extremely low profile since he took over leadership of the Islamic State. He had not appeared in public, and rarely released any audio recordings. His influence and day-to-day involvement in the group’s operations was not known and it is difficult to gauge how his death will affect the group.

His killing, however, is a significant blow just as the group had been trying to reassert itself in Syria and Iraq.

The opposition-run Syrian Civil Defense, first responders also known as the White Helmets, said 13 people were killed in shelling and clashes that ensued after the U.S. commando raid.

The Pentagon released the first government photos and video clips of the nighttime operation, including one showing Delta Force commandos approaching the walls of the compound in which al-Baghdadi and others were found.

The Pentagon provided no details on casualties in the raid.

The Observatory said the troops landed in helicopters. Residents and activists described witnessing a large ground assault, with U.S. forces using megaphones urging women and children to leave the area.

Omar Saleh, a resident of a nearby house, said he was asleep when his doors and windows started to rattle to the sound of low-flying aircraft at 1:10 a.m. local time. He ran to open the windows with the lights off, and saw three helicopters. He then heard a man, speaking Arabic with an Iraqi or Saudi accent through a loudspeaker, urging women to surrender or leave the area.

"This went on for 45 minutes. There was no response. Then the machine gun fire erupted," Saleh said. He said the firing continued for two hours, as aircraft circled low over the area.

Taher al-Omar, an Idlib-based activist, said he witnessed clashes between fighters and the U.S. force. Others reported hearing at least one major explosion during the operation. A U.S. official said that one of the helicopters in the raid suffered a mechanical problem and had to be blown up on the ground.

The military operation got attention on social media, with tweets from the region describing helicopters firing around the building near Atmeh. Flight-tracking data also suggested that multiple drones were circling the city of Sarmada and the village of Salwah, just north of the raid’s location.

Through slickly engineered propaganda, including brutal beheading videos, IS emerged as a dominant global extremist threat in the past decade. Its clarion call to followers in the West to either join its self-described caliphate in Syria, or to commit acts of violence at home, inspired killings in the U.S. as well as thousands of travelers determined to become foreign fighters. The allure of IS to would-be militants has proved challenging for the West to fully stamp out even amid leadership changes and U.S. military strikes and raids.

At the height of its territorial conquests around 2014, the Islamic State controlled more than 40,000 square miles stretching from Syria to Iraq and ruled over 8 million people.

The Islamic State group has been reasserting itself in Syria and Iraq with increased attacks.

Last month, it carried out its biggest military operation since it was defeated and its members scattered underground in 2019: an attack on a prison in northeast Syria holding at least 3,000 IS detainees. The attack appeared aimed to break free senior IS operatives in the prison.

It took 10 days of fighting for U.S.-backed, Kurdish-led forces to retake the prison fully, and the force said more than 120 of its fighters and prison workers were killed along with 374 militants. The U.S.-led coalition carried out airstrikes and deployed American personnel in Bradley Fighting Vehicles to the prison area to help the Kurdish forces.

A senior SDF official, Nowruz Ahmad, said Monday that the prison assault was part of a broader plot that IS had been preparing for a long time, including attacks on other neighborhoods in Kurdish-run northeastern Syria and on the al-Hol camp in the south, which houses thousands of families of IS members.

The U.S.-led coalition has targeted high-profile militants on several occasions in recent years, aiming to disrupt what U.S. officials say is a secretive cell known as the Khorasan group that is planning external attacks. A U.S. airstrike killed al-Qaida’s second in command, former bin Laden aide Abu al-Kheir al-Masri, in Syria in 2017.