The U.S. and western allies said they will not recognize the "sham" annexation, but Putin vowed to would protect the regions as part of its sovereign territory.

MOSCOW - The U.S. on Friday sanctioned more than 1,000 people and firms connected to Russia’s invasion of Ukraine, including its Central Bank governor and families of Security Council members, after President Vladimir Putin signed treaties absorbing occupied regions of Ukraine into Russia in defiance of international law.

The Treasury Department named hundreds of members of Russia's legislature, leaders of the country's financial and military infrastructure and suppliers for sanctions designations. The Commerce Department added 57 companies to its list of export control violators, and the State Department added more than 900 people to its visa restriction list.

In Ukraine, President Volodymyr Zelenskyy said his nation was making an "accelerated" bid to join the NATO military alliance.

President Joe Biden said of Putin's steps: "Make no mistake: These actions have no legitimacy." He said the new financial penalties will impose costs on people and companies inside and outside of Russia "that provide political or economic support to illegal attempts to change the status of Ukrainian territory."

"I look forward to signing legislation from Congress that will provide an additional $12 billion to support Ukraine," he said.

The U.S. and European Union are stepping up the intensity of sanctions after Russia announced it was mobilizing up to 300,000 more troops to join the invasion of Ukraine and Putin ratified the results of Kremlin-orchestrated annexation "referendums" that Kyiv and the West call sham elections.

Putin warned that Russia would never give up the absorbed regions —the Donetsk, Luhansk, Kherson and Zaporizhzhia regions— and would protect them as part of its sovereign territory. 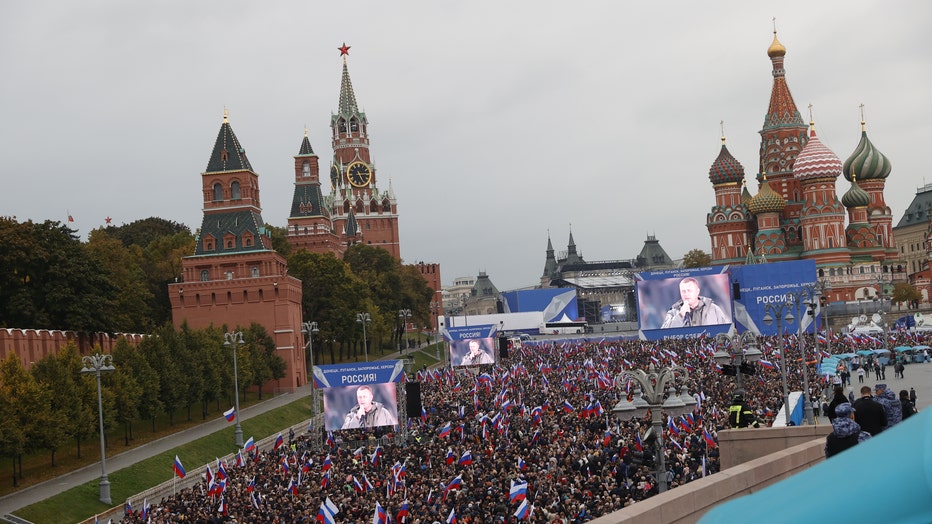 People holding Russian flags gather at Red Square during a ceremony marking the annexation of four regions of Ukraine after referendums on September 30, 2022, in Moscow, Russia. (Photo by Sefa Karacan/Anadolu Agency via Getty Images)

Both houses of the Russian parliament will meet next week to approve the treaties for the regions to join Russia.

Treasury Secretary Janet Yellen said, "We will not stand by as Putin fraudulently attempts to annex parts of Ukraine."

"This is a clear violation of international law and the United Nations Charter," he said.

Democratic and Republican lawmakers this week accused the Biden administration of overpromising and under-delivering on how hard and quickly initial rounds of sanctions would hit Russia and hurt Putin’s ability to keep waging his war in Ukraine.

Pressed by lawmakers on the Senate Foreign Relations Committee to identify sanctions that could force an end to Russia’s invasion, assistant Treasury Secretary Elizabeth Rosenberg, one of the architects of the administration’s sanctions regime, said the U.S. must focus above all on curbing the record oil and gas profits that are allowing Russia to ride out the world’s financial punishments and keep fighting.

The U.S. and its European allies are rushing to complete agreement on a measure they hope will accomplish that aim, and deliver the long-promised knock-out punch to Russia’s economy: a cap on Russia’s maritime oil exports, that would undermine the prices Putin can demand for his country’s oil globally. 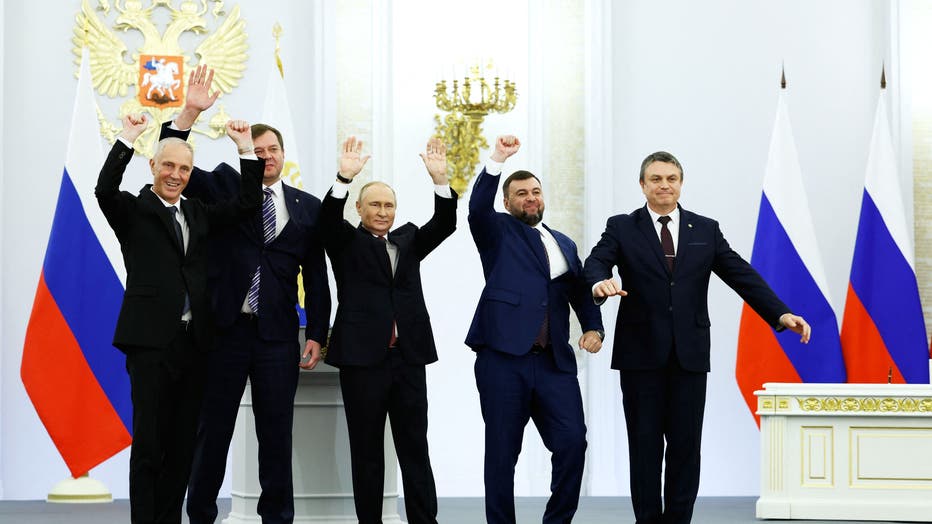 State and Treasury officials also are calling for increased sanctions on Russia’s arms and high-tech suppliers. Together, sanctions in those two areas could make fighting and funding the Ukraine war unsustainable, they say.

Since the start of Russia’s invasion of Ukraine, the U.S. and European nations have imposed significant financial penalties on Russia, its leadership and wealthy oligarchs tied to Putin.

The allies have gone after the Central Bank reserves that underpin the Russian economy and severed many Russian banks from a vital global financial network called SWIFT.

Meanwhile, the war is having a devastating impact on the global economy and has contributed to massive disruptions to supplies of energy and food throughout the world.

The Organization for Economic Cooperation and Development this week said the global economy is set to lose $2.8 trillion in output in 2023 because of the war.