Russian forces launched new strikes on Ukrainian cities as Kremlin-orchestrated votes took place in occupied regions of Ukraine to create a pretext for their annexation by Moscow.

Ukraine's presidential office said the latest Russian shelling killed at least three people and wounded 19. Oleksandr Starukh, the Ukrainian governor of Zaporizhzhia, one of the regions where Moscow-installed officials organized referendums on joining Russia, said a Russian missile hit an apartment building in the city of Zaporizhzhia, killing one person and injuring seven others.

Ukraine and its Western allies say the referendums underway in Kherson and Zaporizhzhia in the south and the eastern Luhansk and Donetsk regions have no legal force. They alleged the votes were an illegitimate attempt by Moscow to seize Ukrainian territory stretching from the Russian border to the Crimean Peninsula.

Luhansk Gov. Serhiy Haidai said the voting "looked more like an opinion survey under the gun barrels," adding that Moscow-backed local authorities sent armed escorts to accompany election officials and to take down the names of individuals who voted against joining Russia.

Ukrainian President Volodymyr Zelenskyy urged Ukrainians in occupied regions to undermine the referendums and to share information about the people conducting "this farce." He also called on Russian recruits to sabotage and desert the military if they are called up under the partial troop mobilization President Vladimir Putin announced Wednesday.

"If you get into the Russian army, sabotage any activity of the enemy, hinder any Russian operations, provide us with any important information about the occupiers – their bases, headquarters, warehouses with ammunition," Zelenskyy said. 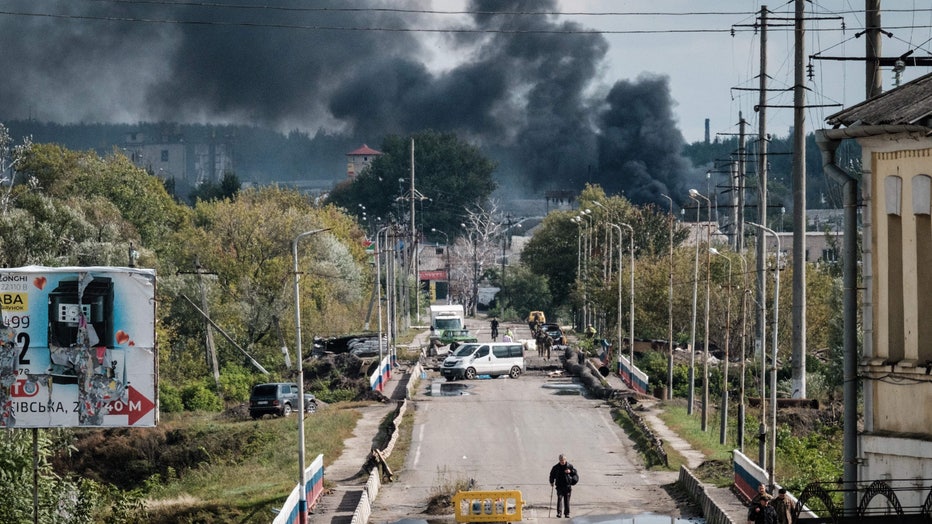 A man walks with a cane near a bridge over the Oskil River as black smoke rises in the frontline city of Kupiansk, Kharkiv region, on September 24, 2022, amid the Russian invasion of Ukraine. (Photo by YASUYOSHI CHIBA/AFP via Getty Images)

Putin on Saturday signed a hastily approved bill that toughens the punishment for soldiers who disobey officers’ orders, desert or surrender to the enemy. Reports say soldiers could face up to 10 years in prison.

To carry out the referendums that started Friday, election officials accompanied by police officers carried ballots to homes and set up mobile polling stations, citing safety reasons. The votes are set to wrap up Tuesday. Donetsk Gov. Pavlo Kyrylenko said

"Half of the population fled the Donetsk region because of Russian terror and constant shelling, voting against Russia with their feet, and the second half has been cheated and scared," .

In the Ukrainian capital, about 100 people from the Russia-occupied city of Mariupol, which is part of the Donetsk region, gathered to protest the referendum, covering themselves in Ukrainian flags and carrying posters "Mariupol is Ukraine."

"They ruined the city, killed thousands of people, and now they are doing some kind of profanation over there," said Vladyslav Kildishov who helped organize the rally.

Elina Sytkova, 21, a demonstrator who has many relatives left in Mariupol even though the city spent months under bombardment, said the vote was "an illusion of choice when there isn’t any."

It's "like a joke, because it’s the same as it was in Crimea, meaning it’s fake and not real," she said, referring to a 2014 referendum that took place in Crimea before Moscow annexed the peninsula in a move that most of the world considered illegal.

The mobilization ordered by Putin marked a sharp shift from his effort to cast the seven-month war as a "special military operation" that doesn’t interfere with the lives of most Russians.

The Russian leader and Defense Minister Sergei Shoigu said the order applied to reservists who had recently served or had special skills, but almost every man is considered a reservist until age 65 and Putin's decree kept the door open for a broader call-up. 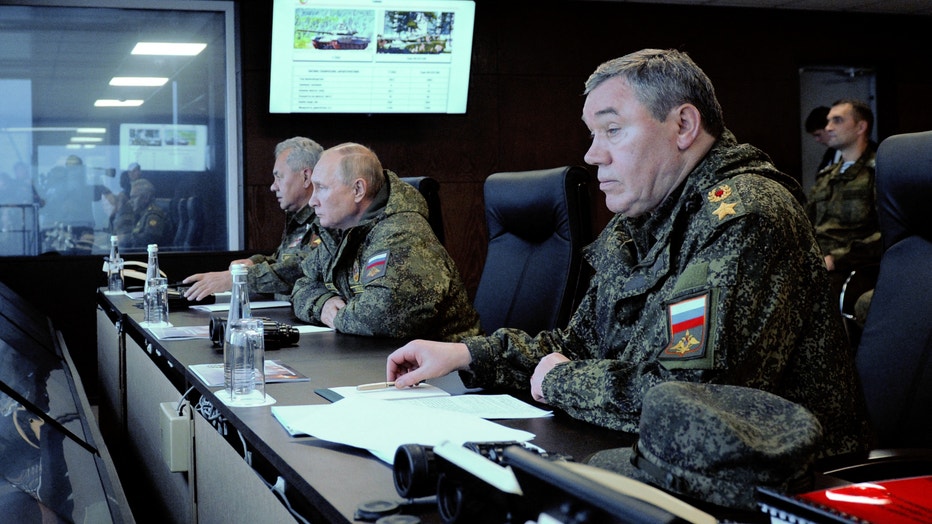 The Russian Ministry said that the partial mobilization initially aimed to add about 300,000 troops to beef up its outnumbered volunteer forces in Ukraine. The Ukrainian government stopped allowing most men ages 18-60 to leave the country immediately after Russia's Feb. 24 invasion under a general mobilization order intended to build a 1 million-strong military.

Across Russia's 11 time zones, men hugged their weeping family members before being rounded up for service amid fears that a wider call-up might follow. Some media reports claimed Russian authorities planned to mobilize more than 1 million recruits, which the Kremlin denied.

Moving to assuage public fears over the call-up that could erode Putin's grip on power, authorities announced that many Russians working in high tech, communications or finance would be exempt.

After some of the pilots of the Russian flag carrier Aeroflot and other airlines reportedly received call-up notices, pilots and traffic controllers unions moved quickly to secure a government promise that they, too, would be excluded from the mobilization.

Police moved quickly to disperse more demonstrations against the mobilization that were held in several cities across Russia on Saturday and detained more than 100 participants. Over 1,300 protesters were arrested during antiwar demonstrations on Wednesday, and many of them immediately received call-up summons. 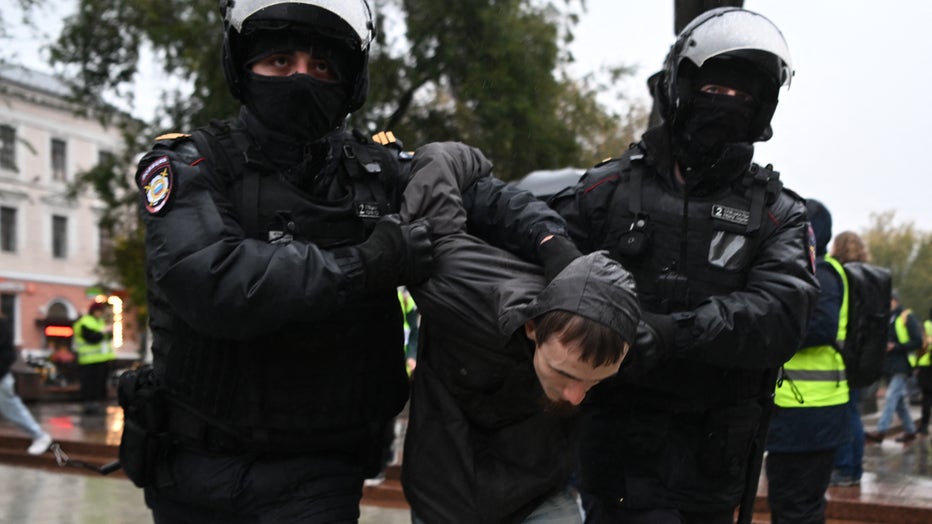 Police officers detain a man in Moscow on September 24, 2022, following calls to protest against the partial mobilisation announced by the Russian President. (Photo by -/AFP via Getty Images)

Many Russian men bought up scarce and exorbitantly priced airline tickets out of the country as as rumors swirled about a pending border closure. Thousands others fled by car, creating lines of traffic hours or even days long at some borders. The massive exodus underlined the unpopularity of the war and fueled public outrage.

In a sign the Kremlin was starting to worry about a backlash, the head of a top state-controlled TV station harshly criticized military authorities for hastily sweeping up random people to meet mobilization targets instead of calling up people with specific skills and recent military service, as Putin promised.

RT chief Margarita Simonyan lashed out at military conscription offices for "driving people mad" by rounding up those who weren't supposed to be drafted. "It's as if they were tasked by Kyiv to do that," she said.

Ramzan Kadyrov, the Kremlin-backed regional leader of Chechnya who sent his forces to fight in Ukraine and repeatedly called for tougher action, suggested that Moscow should more broadly engage personnel from law-enforcement agencies in the fighting.

He denounced those fleeing the mobilization as cowards and argued that police and various paramilitary agencies that number a total of 5 million personnel together with the military would make a much better-trained and motivated fighting force.

"If we leave 50 percent of the personnel to fulfil their duties, 2.5 million others will blow any Western army away and we won’t need any reservists," Kadyrov said.

The Defense Ministry on Saturday announced the dismissal of Gen. Dmitry Bulgakov from the post of deputy defense minister in charge of logistics. It didn't mention the cause for his ouster, but the move was widely seen as a punishment for the flaws in supporting operations in Ukraine.