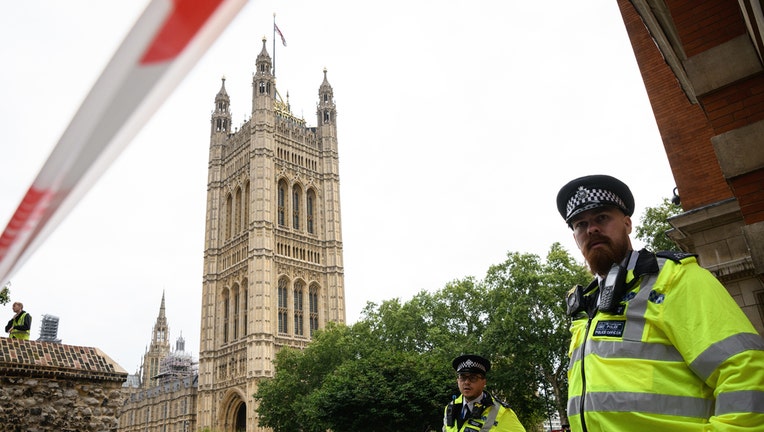 LONDON - (AP) -- A car plowed into pedestrians and cyclists near the Houses of Parliament in London during the morning rush hour Tuesday, injuring three people in what police suspect is the latest in a string of attacks in the British capital that used vehicles as weapons.

Armed police flooded the area after the incident was reported at 7:37 a.m., hauling the driver from the vehicle, arresting him and cordoning off streets surrounding the heart of Britain's government. The nearby Westminster subway station was closed, and police asked people to stay away from the area.

"Given that this appears to be a deliberate act, the method and this being an iconic site, we are treating it as a terrorist incident," Assistant Commissioner Neil Basu of the Metropolitan Police told reporters outside Scotland Yard.

A man in his late 20s was arrested on suspicion of terrorism offenses. The suspect was not cooperating with police, and officers were working to confirm his identity, said Basu, who oversees U.K. counterterrorism policing. No other suspects have been identified and police believe there is no further threat to Londoners, he said.

Basu said "we don't believe this individual was known" to police or Britain's intelligence services.

Eyewitnesses said the silver Ford Fiesta car was traveling at high speed when it hit pedestrians and cyclists, then crashed into a barrier designed to protect Parliament from vehicle attack. Two people were taken to local hospitals and another was treated at the scene. One woman remained hospitalized Tuesday afternoon, but her injuries aren't believed to be life threatening, authorities said.

"The car drove at speed into the barriers outside the House of Lords. There was a loud bang from the collision and a bit of smoke," Ewelina Ochab told The Associated Press. "The driver did not get out. The guards started screaming to people to move away."

"It didn't look like an accident," he said. "How do you do that by accident?"

Donovan Parsons, a cameraman for ITV's "Good Morning Britain," was filming outside Parliament when he heard a loud crash.

"I saw the car crash into the barrier outside Westminster Palace, with smoke coming out of the vehicle. Police were around it, telling people to get back. ... They dragged someone out of the car."

Prime Minister Theresa May tweeted: "My thoughts are with those injured in the incident in Westminster and my thanks to the emergency services for their immediate and courageous response."

U.S. President Donald Trump was less measured, tweeting that the crash was "another terrorist attack in London."

Trump added: "These animals are crazy and must be dealt with through toughness and strength!"

Trump has a history of tweeting about violence, or alleged violence, in London. He angered many when he said a London hospital was like a war zone because of knife violence.

Parliament was the site of an attack in March 2017, when Khalid Masood ploughed a car into crowds on Westminster Bridge, killing four people. Masood abandoned his car and then stabbed and killed a police officer before being shot dead in a courtyard outside Parliament.

Less than three months later, a van rammed into pedestrians on London Bridge before three men abandoned the vehicle and attacked weekend revelers in the nearby Borough Market. Eight people were killed and 48 injured in the attack.

On June 19, 2017, a man drove a van into a crowd of worshippers leaving a mosque in north London, killing one man and injuring eight others.

The official terrorist threat level for Britain is "severe," indicating an attack is considered highly likely.