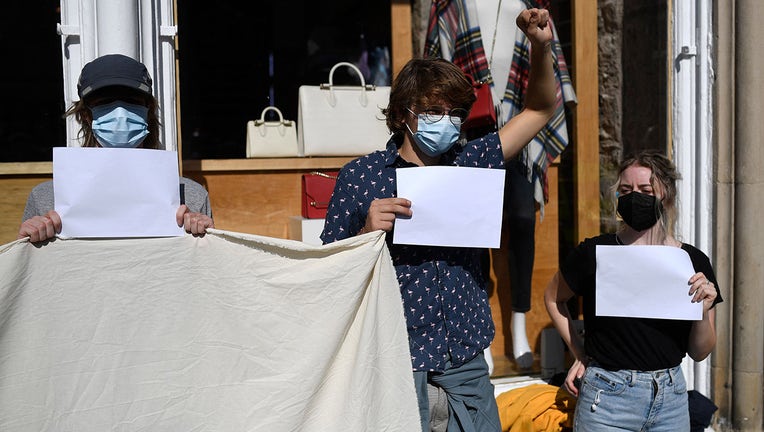 Anti-Royalist protesters hold up blank placards in a demonstration against the way their protests are being policed, in Edinburgh on September 13, 2022, following the death of Queen Elizabeth II on September 8. (Photo by OLI SCARFF/AFP via Getty Imag

LONDON - In a country famed for irreverence, some worry a new code of silence has taken hold.

Since the death of Queen Elizabeth II, a handful of people in Britain have been detained by police for expressing — often bluntly — anti-monarchy views.

A woman in Edinburgh holding a sign reading "F—— imperialism, abolish the monarchy" was charged with a breach of the peace. A man faced the same charge after he heckled Prince Andrew as the queen’s hearse traveled through the Scottish capital.

In Oxford, peace activist Symon Hill was put in handcuffs after he shouted his opposition during a ceremonial proclamation of the new king.

Hill said he spontaneously called out "Who elected him?" because he objects to a head of state being imposed on the country.

"I doubt most of the people in the crowd even heard me," he wrote on his blog. "Two or three people near me told me to shut up."

Hill said he was put into a police van by officers who told him he was being detained for alleged behavior that could cause "harassment, alarm or distress." He was later released but could still face questioning.

"The police abused their powers to arrest someone who voiced some mild opposition to a head of state being appointed undemocratically," he said.

In London, a woman was moved from the gates of Parliament while carrying a "Not my king" sign. Police said she was removed from the spot, where a police officer was stabbed to death by an Islamist attacker in 2017, to allow vehicles in and was not asked to leave the wider area. 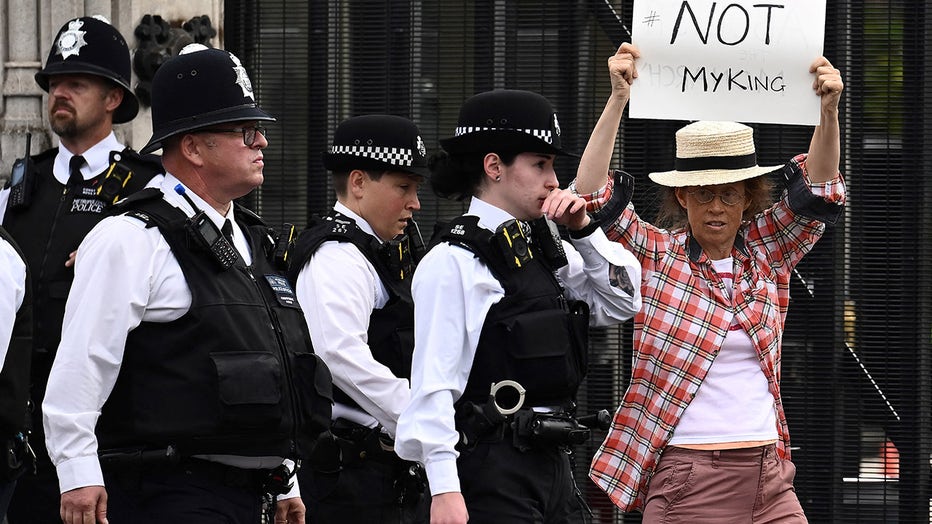 An anti-Royal demonstrator protests outside Palace of Westminster, central London on September 12, 2022, following the death of Queen Elizabeth II on September 8. (Photo by MARCO BERTORELLO/AFP via Getty Images)

Lawyer Paul Powlesland said he was questioned by police outside Parliament on Monday while carrying a blank piece of paper on which he, too, planned to write "Not my king."

In footage shot by Powlesland, an officer is heard saying "it may offend someone" if he wrote the words.

The civil rights group Liberty said it was "very worrying to see the police enforcing their broad powers in such a heavy-handed and punitive way to clamp down on free speech and expression."

Republic, a group that campaigns for the abolition of the monarchy, said it would be complaining to police "in the strongest possible terms," and would organize protests at the king’s coronation in the coming months.

"Free speech is fundamental to any democracy," said spokesman Graham Smith. "At a time when the media is saturated with fawning over a king appointed without discussion or consent, it is even more important."

The arrests come after the government passed a contentious law-and-order bill that toughens police powers to limit disruptive protests. It’s not clear whether any of the arrests involved the new law.

Prime Minister Liz Truss’s spokesman, Max Blain, said that while "this is a period of national mourning, and indeed grief, for the vast majority of the United Kingdom … the right to protest does remain a fundamental principle."

But he said it is "for the police to decide what is appropriate in individual circumstances."

The queen's death has triggered one of the biggest security operations in British history. Some 500 royals, heads of state and heads of government from around the world are expected at the late monarch's state funeral on Monday. Before that, hundreds of thousands are expected to line up in a queue snaking through central London to see the queen lying in state at Parliament's Westminster Hall.

Huge crowds have already gathered near Buckingham Palace and other royal residences to leave notes and flowers or simply be part of a moment in history.

London’s Metropolitan Police force said "the overwhelming majority of interactions between officers and public at this time have been positive."

"The public absolutely have a right of protest and we have been making this clear to all officers involved in the extraordinary policing operation currently in place," said Deputy Assistant Commissioner Stuart Cundy.