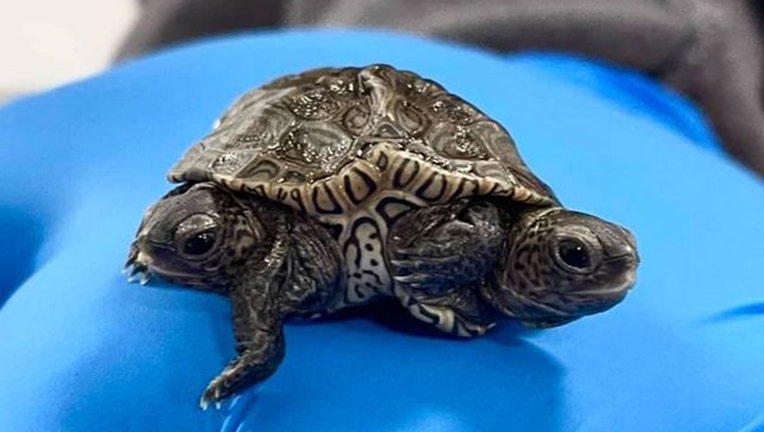 BARNSTABLE, Mass. - A two-headed diamondback terrapin is doing well at a wildlife center after hatching two weeks ago at a protected nesting site in Massachusetts.

The six-legged turtle has bicephaly, which is caused by both genetic and environmental factors that influence an embryo during development, according to Birdsey Cape Wildlife Center.

"Animals with this rare condition don't always survive very long or live a good quality of life, but these two have given us reason to be optimistic! 'They' have been in our care for just over two weeks and continue to be bright and active," the wildlife center said in a Facebook post. "They are eating, swimming, and gaining weight each day. It is impossible to get inside the heads of these two, but it appears that they work together to navigate their environment."

X-rays revealed that it has two spines that fuse further down the body, and a barium study showed each head is connected to a separate gastrointestinal tract.

"The right side appears to be slightly more developed but they are eating and digesting food," the wildlife center said. "A supervised deep water swim test showed that they can coordinate swimming so that they can come to the surface to breathe when needed."

Diamondback terrapins live in brackish water (a mix of saltwater and freshwater) and salt marshes all along the Atlantic coast from Massachusetts to Florida and along the Gulf coast, according to the U.S. Fish and Wildlife Service. They eat mostly clams, snails, and mussels but also may eat fish, worms, insects, and crabs.

This story was produced in New York with Storyful.