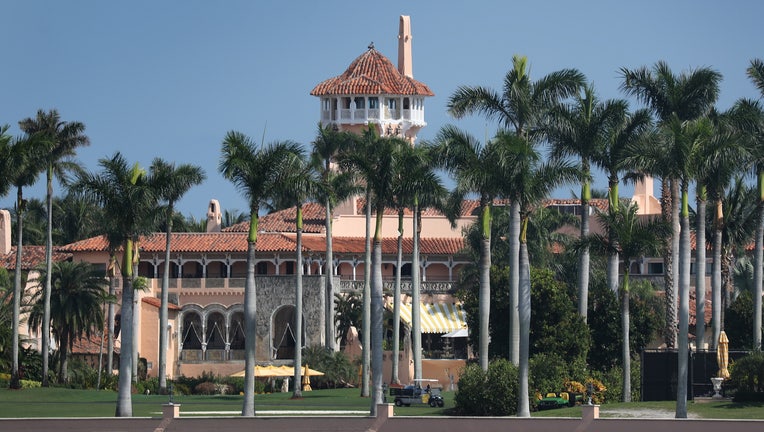 PALM BEACH, Fla. - President Donald Trump's expected move to his Mar-a-Lago club after he leaves office next month is being challenged by a lawyer who says a 1990s agreement allowing Trump to convert the Florida property into a business prohibits anyone from living there, including him.

Attorney Reginald Stambaugh sent a letter this week to the Town of Palm Beach saying he represents a neighbor who doesn't want the president to take up residence at the 17-acre property because it would decrease the area's property values. He also asserts that a microwave security barrier operated by the Secret Service is harming his client, who he says is exhibiting symptoms of microwave exposure. He did not give the client's name.

The president and first lady Melania Trump changed their legal residence from New York City to Palm Beach last year. Stambaugh says that violates the 1993 agreement between Trump and the town that allowed him to turn Mar-a-Lago from a private home into a club that has 10 guest rooms for rent.

The agreement says only members can stay overnight and for no more than 21 days per year, divided into three one-week stays that cannot run consecutively. The question is whether Trump is a club member and covered by those rules. Stambaugh believes he is — and comments Trump's lawyer made in 1993 back that up.

RELATED: Trump 2024? President's campaign asks supporters if he should run for office again in four years

"In order to avoid an embarrassing situation for everyone and to give the President time to make other living arrangements in the area, we trust you will work with his team to remind them" of the agreement, Stambaugh wrote. "Palm Beach has many lovely estates for sale and surely he can find one which meets his needs." He did not immediately respond to a call and email Thursday seeking further comment.

The Trump Organization issued a statement Thursday saying, "There is no document or agreement in place that prohibits President Trump from using Mar-A-Lago as his residence."

Town Manager Kirk Blouin declined comment Thursday through an aide, and Mayor Gail Coniglio did not respond to an email and phone call seeking comment. Mar-a-Lago manager Bernd Lembcke also did not return a phone call.

Trump purchased Mar-a-Lago for $10 million in 1985 from the estate of Marjorie Merriweather Post, the owner of General Foods. The 126-room mansion had deteriorated after her death in 1973, when she left it to the U.S. government as a possible presidential vacation home. The government gave it back in 1981.

After Trump bought it, he spent millions upgrading the property while living there part-time, usually between November and May when Florida's weather is temperate.

By the early 1990s, however, Trump was in financial straits as real estate prices dropped and several of his businesses flopped, including a New Jersey casino. He told the town he could no longer afford the $3 million annual upkeep and it was unfair that he was shouldering the costs alone. He proposed subdividing the property and building mansions. The town rejected the proposal.

In 1993, Trump and the town agreed he could turn the estate into a private club. It would be limited to 500 members — the initiation fee is now $200,000 and annual dues are $14,000. The agreement has strict restrictions on parking and noise and specifically bars Trump from operating a casino or an animal circus. The town did not respond to questions about why the latter prohibition was added.

According to 1993 Palm Beach Post articles, Trump attorney Paul Rampell told the town council Trump would no longer reside at the mansion if the agreement were approved.

"Another question that’s often asked to me is whether Mr. Trump will continue to live at Mar-a-Lago," Rampell told the council, according to the Post. "No, except that he will be a member of the club and therefore will be entitled to the use of guest rooms."

Rampell did not respond to an email and phone call Thursday.

The length of Trump's stays at Mar-a-Lago before his presidency are unknown, but since taking office he has spent more than 21 days per year there, including visits of about two weeks during the Christmas holidays. He has hosted several world leaders there, including Chinese President Xi Jinping and former Japanese Prime Minister Shinzo Abe.

Before he became president, Trump and the town often clashed over the club's operation. Neighbors complained about noise and a car lot-sized U.S. flag and its 80-foot pole that Trump erected in 2006 without the proper permits. The two sides eventually settled: Trump got his pole, and his foundation gave $100,000 to veteran charities. He unsuccessfully sued Palm Beach County because jetliners taking off from the nearby international airport flew over the mansion.

Since his 2016 election, his visits have created traffic snarls as vehicles are diverted away from Mar-a-Lago when he is there. Palm Beach is one of Florida's most exclusive towns, with a median home price of over a million dollars.

There have been numerous protests by Trump opponents and rallies by supporters near Mar-a-Lago in the last four years and several incidents that resulted in arrests. Those include:

- A Chinese businesswoman illegally gained admission last year when Secret Service agents thought she was the daughter of a member. She was found guilty on federal trespassing charges and deported after spending eight months in jail.

- A University of Wisconsin student got inside by mingling with a group entering for a party. He apologized and got probation.

- A Connecticut opera singer sped through a Secret Service checkpoint on the road outside the estate in January, drawing gunfire from agents and sheriff's deputies. She is awaiting trial. Her attorney says she will mount an insanity defense.