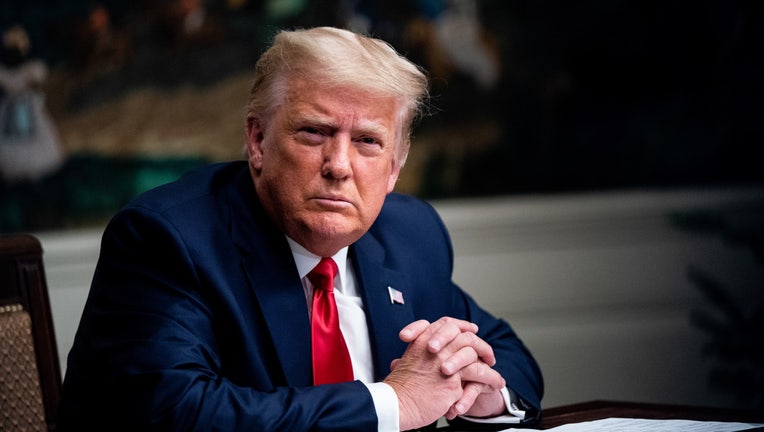 President Donald Trump speaks in the Diplomatic Room of the White House on Thanksgiving on November 26, 2020 in Washington, DC. (Photo by Erin Schaff - Pool/Getty Images)

WASHINGTON - President Donald Trump on Wednesday asked the Supreme Court to let him join an improbable lawsuit challenging election results in Pennsylvania and other states that he lost, a day after the justices rejected a last-gasp bid to reverse Pennsylvania’s certification of Democrat Joe Biden’s victory.

The high court has asked for responses by Thursday. Out of the roughly 50 lawsuits filed around the country contesting the Nov. 3 vote, Trump has lost more than 35 and the others are pending, according to an Associated Press tally.

The suit from the Texas attorney general, Republican Ken Paxton, demands that the 62 total Electoral College votes in Georgia, Michigan, Pennsylvania, and Wisconsin be invalidated. That’s enough, if set aside, to swing the election to Trump. Paxton’s suit repeats a litany of false, disproven and unsupported allegations about mail-in ballots and voting in the four battlegrounds.

Repeating many of those claims, Trump lawyer John Eastman wrote, “The fact that nearly half of the country believes the election was stolen should come as no surprise.” Biden won by more than 7 million votes and has a 306-232 electoral vote edge.

“We will be INTERVENING in the Texas (plus many other states) case,” Trump said hours before the high court filing. “This is the big one. Our Country needs a victory!”

The president's official schedule on Thursday includes lunch with state attorneys general. Seventeen Republican AGs in states Trump won last month have joined the Texas lawsuit, urging the court to take on the lawsuit less than a week before presidential electors gather in state capitals to formally choose Biden as the next president.

Legal experts dismissed Paxton’s filing as the latest and perhaps longest legal shot since Election Day, and officials in the four states sharply criticized Paxton. “I feel sorry for Texans that their tax dollars are being wasted on such a genuinely embarrassing lawsuit,” Wisconsin’s attorney general, Josh Kaul, said.

The Supreme Court, without comment Tuesday, refused to call into question the certification process in Pennsylvania. Gov. Tom Wolf, D-Pa., already has certified Biden’s victory and the state’s 20 electors are to meet on Dec. 14 to cast their votes for the former vice president.

In any case, Biden won 306 electoral votes, so even if Pennsylvania’s results had been in doubt, he still would have more than the 270 electoral votes needed to become president.

Shortly before tweeting about joining Paxton’s case, Trump distanced himself from the Pennsylvania challenge, saying it wasn’t his. “The case everyone has been waiting for is the State’s case with Texas and numerous others joining,” he said.

The court’s decision not to intervene in Pennsylvania came in a suit led by Rep. Mike Kelly, R-Pa., and GOP congressional candidate and Trump favorite Sean Parnell, who lost to Rep. Conor Lamb, D-Pa.

“Even Trump appointees & Republicans saw this for what it was: a charade,” Lamb said on Twitter.

In court filings, lawyers for Pennsylvania and Wolf, said the suit’s claims were “fundamentally frivolous” and its request “one of the most dramatic, disruptive invocations of judicial power in the history of the Republic.”

“No court has ever issued an order nullifying a governor’s certification of presidential election results,” they wrote.

Having lost the request for the court to intervene immediately, Greg Teufel, a lawyer for Kelly and Parnell, said he would request that the court consider the case on its underlying merits on an expedited basis.

In their underlying suit, Kelly, Parnell and the other Republican plaintiffs had sought to either throw out the 2.5 million mail-in ballots submitted under the law or to wipe out the election results and direct the state’s Republican-controlled Legislature to pick Pennsylvania’s presidential electors.

The Republicans argued that Pennsylvania’s expansive vote-by-mail law is unconstitutional because it required a constitutional amendment to authorize its provisions. Just one Republican state lawmaker voted against its passage last year in the Republican-controlled Legislature.

Biden beat Trump by more than 80,000 votes in Pennsylvania, a state Trump had won in 2016. Most mail-in ballots were submitted by Democrats.