What is the Insurrection Act?

The law gives the president to deploy the U.S. military across the country, but only under certain circumstances.

WASHINGTON (AP) - Claiming he is backed by a “silent majority," President Donald Trump turned the nation’s capital into a model for the overwhelming force he believes critical to stop sometimes-violent protests that have spread across the country in a time of racial unrest. His tactics were decried Tuesday by some fellow Republicans as well as his presumptive Democratic opponent.

The violent dispersal of peaceful protests near the White House the night before was a potent symbol of Trump's policing tactics and a physical manifestation of the rhetorical culture war he has stoked since before he was elected. Moments after historic Lafayette Park was cleared, Trump walked across to pose with a Bible in front of a church damaged by fire during protests the previous evening.

“D.C. had no problems last night. Many arrests. Great job done by all. Overwhelming force. Domination,” Trump tweeted Tuesday, after a night in which heavily armed military forces and federal officers swarmed the city. Trump added: “(thank you President Trump!).”

The president wanted to make the aggressive action in the nation’s capital — where he wields disproportionate powers — an example for the rest of the country, a senior White House official said Tuesday, speaking on condition of anonymity because the official was not authorized to discuss internal thinking. Trump hoped his personal walk to the church, after federal officials dispersed protesters, would send a message about how dominant force could restore law and order.

The president has threatened that if states do not take tough enough action, he will deploy active duty military across the country to quell unrest in the wake of the death of George Floyd in Minneapolis.

Who was George Floyd?

“SILENT MAJORITY!” Trump tweeted Tuesday, embracing a phrase popularized by President Richard Nixon decades ago, in claiming broad support for his actions. Trump also emphasized the political importance of the moment to his supporters on Twitter and declared that “My Admin has done more for the Black Community than any President since Abraham Lincoln.”

RELATED: The death of George Floyd: A timeline of a chaotic, emotional week in Minneapolis

The District of Columbia's federal status gives the president outsized authority to act, allowing him to direct the deployment of the National Guard. He authorized Attorney General William Barr to oversee a surge in the deployment of federal law enforcement officers, including the FBI's Hostage Rescue Team and agents from the Drug Enforcement Agency.

Defense Secretary Mark Esper and Gen. Mark Milley, the chairman of the Joint Chiefs of Staff, sought to distance themselves from Monday night’s events after former military officials criticized their appearance with the president. Senior defense officials told reporters the two were not aware that the Park Police and law enforcement had made a decision to clear the square or that Trump intended to visit the church. They had been in Washington to coordinate with federal law enforcement officials but were diverted to the White House to brief Trump on military preparations, the officials said.

Former Vice President Joe Biden, the presumptive Democratic presidential nominee, said of Trump posing for photos holding up a Bible: “I just wish he opened it once in a while.”

And D.C. Mayor Muriel Bowser said of the routing of the protesters, “At no time do we think it was appropriate that people who had not violated the curfew or anything else received that treatment."

Democrats weren't the only ones saying Trump had gone too far.

“There is no right to riot, no right to destroy others’ property, and no right to throw rocks at police,” said Nebraska Republican Sen. Ben Sasse. “But there is a fundamental — a constitutional — right to protest, and I’m against clearing out a peaceful protest for a photo op that treats the Word of God as a political prop.” 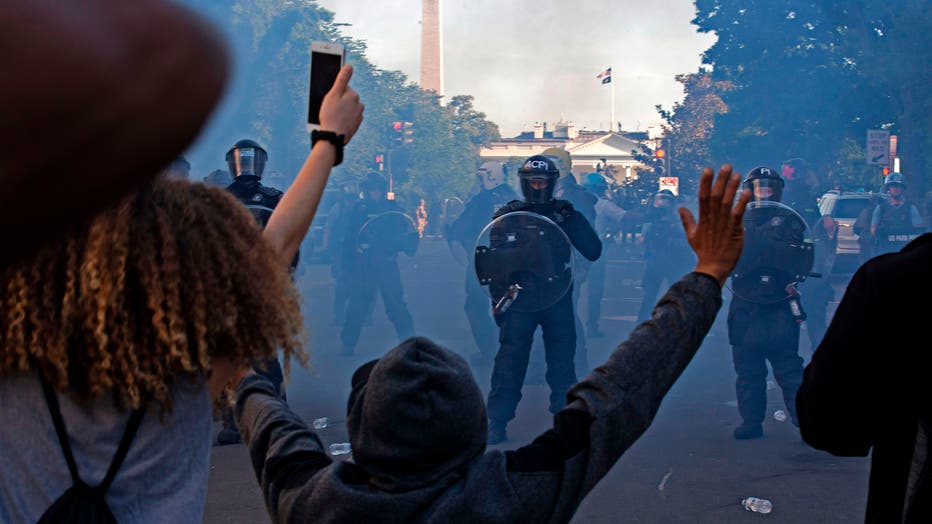 It was Barr who gave the order Monday afternoon for law enforcement to clear out the protest before Trump's walk to the church and ahead of Washington's 7 p.m. curfew. Officials said the decision to clear the park was made earlier in the day in response to violence the night before.

Trump also ordered military aircraft to fly above Washington on Monday night as a “show of force,” according to two Defense Department officials. They said the U.S. military and National Guard were operating under the mission name “Operation Themis.” In Greek mythology, Themis is a titaness of divine law and order, whose symbols are the scales of justice.

Execution of the order to clear the park created striking split-screen images as officers deployed pepper spray, flash bangs and mounted units to break up the peaceful protest even as Trump was in the Rose Garden saying he supported the rights of peaceful protesters. Chemical remnants still hung in the air as he walked to the church.

Trump reacted to the clearing of the protesters with enthusiasm, pumping his fist at officers in the park. He'd been furious about weekend images juxtaposing the fires in the area with the darkened White House in the background, according to current and former campaign and administration officials not authorized to speak publicly about private conversations.

Trump was also angry about the news coverage revealing that he had been rushed to the White House bunker during weekend protests, believing the park fires in what amounts to his extended front yard made him appear weak.

Trump on Tuesday appeared to be backing off his threat to deploy federal troops to quell unrest under the 1807 Insurrection Act. White House officials said Monday night's events indicated that the resources already available to local governments should be able to restore order.

“New York was lost to the looters, thugs, Radical Left, and all others forms of Lowlife & Scum," Trump tweeted. "The Governor refuses to accept my offer of a dominating National Guard. NYC was ripped to pieces.”

President Donald Trump makes a brief address Monday from the Rose Garden after the death of George Floyd last week in Minneapolis police custody has resulted in days of protests, some of them violent, in multiple American cities.

The federal government has provided all affected states with a list of National Guard resources available to them, the White House official said. The official added that Trump’s message to governors was that if they don’t use all the tools in their arsenal they shouldn’t expect a sympathetic response to any request for federal dollars to help with cleanup and recovery down.

Trump, meanwhile, toured a Catholic shrine on Tuesday in his second straight religious-themed appearance after he declared himself to be the “president of law and order."

Washington Archbishop Wilton D. Gregory called it “reprehensible that any Catholic facility would allow itself to be so egregiously misused and manipulated in a fashion that violates our religious principles, which call us to defend the rights of all people even those with whom we might disagree.”

On Tuesday's drive to the shrine, Trump’s motorcade sped past National Guard members deployed around the World War II Memorial. Some onlookers along the route booed, held “black lives matter” signs or made obscene gestures as the convoy rolled past.

Floyd died after a white Minneapolis police officer pinned him down and pressed Floyd’s neck with his knee as the man pleaded that he couldn’t breathe. Violent demonstrations have raged in scores of American cities, marking a level of unrest unseen for decades.