BETHESDA, Md. - After tweeting that he was leaving the military hospital where he has been treated for symptoms of COVID-19 and will continue his recovery at the White House, President Donald Trump left Walter Reed Medical Center Monday — though his doctors say he’s “not out of the woods yet” and remains infectious.

Trump made the journey aboard the presidential helicopter, Marine One. Upon arriving at the White House, Trump exited the helicopter and made his way onto the South Portico, removing his mask as he saluted Marine One. He entered the White House, where aides were visible milling about the Blue Room, without wearing a face covering. 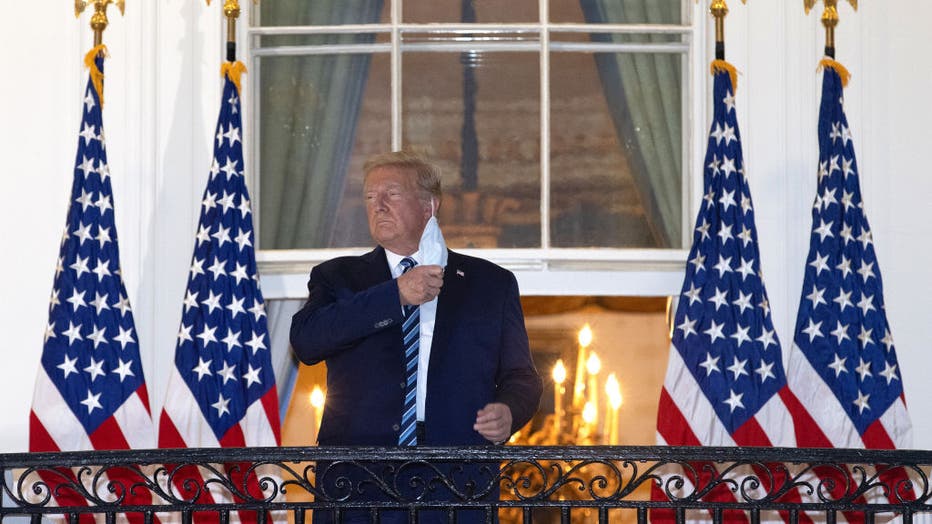 President Donald Trump removes his mask upon his return to the White House from Walter Reed National Military Medical Center on Oct. 5, 2020 in Washington, D.C. (Photo by Win McNamee/Getty Images)

In a video that was apparently filmed moments after Trump arrived back at the White House, the president again downplayed the risk of the virus, saying, “Don’t be afraid of it,” echoing an earlier tweet before his discharge from Walter Reed.

“I just left Walter Reed Medical Center and it’s really something very special,” Trump said in the video. “The doctors, the nurses, the first responders — and I learned so much about coronavirus, and one thing that’s for certain: Don’t let it dominate you. Don’t be afraid of it.”

“You’re going to beat it,” Trump said. “We have the best medical equipment, we have the best medicines — all developed recently, and you’re going to beat it. I went, I didn’t feel so good, and two days ago — I could’ve left two days ago — two days ago, I felt great, like better than I have in a long time. I said just recently, better than 20 years ago. Don’t let it dominate. Don’t let it take over your lives — don’t let that happen.”

Trump, unmasked and still standing on the terrace of the South Portico of the White house, went on, “We have the greatest country in the world. We’re going back. We’re going back to work. We’re going to be out front. As your leader, I had to do that. I knew there’s danger to it, but I had to do it. I stood out front, I led. Nobody that’s a leader would not do what I did. And I know there’s a risk, there’s a danger — but that’s OK.”

“And now I’m better,” Trump said. “And maybe I’m immune — I don’t know, but don’t let it dominate your lives. Get out there, be careful, we have the best medicines in the world, and it all happened very shortly, and they’re all getting approved, and the vaccines are coming momentarily.”

Trump's doctor, Navy Cdr. Sean Conley, said the president would not be fully “out of the woods” for another week but Trump had met or exceeded standards for discharge from the hospital.

The president said earlier on Twitter that he would be discharged from Walter Reed Medical Center at 6:30 p.m. ET Monday. He walked out of the front doors of the hospital around that time.

A masked Trump waved and gave a thumbs-up to reporters stationed outside, declining to answer multiple questions before getting into a waiting SUV.

“Feeling really good,” Trump wrote in his tweet earlier Monday. “Don’t be afraid of Covid. Don’t let it dominate your life. We have developed, under the Trump Administration, some really great drugs & knowledge. I feel better than I did 20 years ago!”

Trump’s doctor said Monday afternoon that his condition has “continued to improve” and he has “met or exceeded all standard hospital discharge criteria.”

“Though he may not entirely be out of the woods yet, the team and I agree that all our evaluations and most importantly, his clinical status, support the president’s safe return home,” said Trump’s physician, Navy Cdr. Sean Conley. Conley said Trump remains infectious. 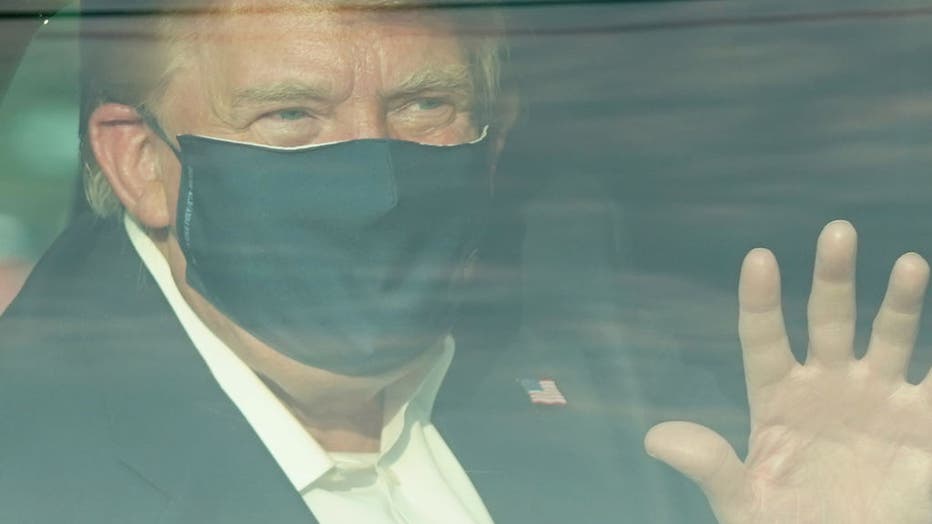 President Donald Trump said he will be released from the the military hospital where he is being treated for COVID-19 on Monday evening.

Trump received his third dose of remdesivir on Sunday night and was going to receive a fourth dose prior to leaving the hospital and a fifth dose on Tuesday, according to Dr. Brian Garibaldi, who is also part of the physician team. Remdesivir is a Gilead Sciences drug currently used for moderately and severely ill COVID-19 patients.

Trump is also being given the steroid drug dexamethasone, which is used in a wide range of conditions for its anti-inflammatory and immunosuppressant effects, according to the World Health Organization.

RELATED: How long will President Trump be quarantined?

President Donald Trump's doctors held a press conference Oct. 5 to discuss his condition ahead of his release from the hospital following treatment for COVID-19.

Conley declined to share results of medical scans of Trump’s lungs, saying he was not at liberty to discuss the information because Trump did not waive doctor-patient confidentiality on the subject. COVID-19 has been known to cause significant damage to the lungs of some patients. He also declined to share the date of Trump's most recent negative test for the virus — a critical data point for contact tracing and understanding where Trump was in the course of the disease.

Conley said the president could resume his normal schedule once “there is no evidence of live virus still present.” According to the Centers for Disease Control and Prevention, those with mild to moderate symptoms of COVID-19 can be contagious for as many — and should isolate for at least — 10 days.

On Sunday afternoon, Trump briefly ventured out of the hospital while contagious to salute cheering supporters by motorcade — an outing that disregarded precautions meant to contain the novel coronavirus

Nearly 210,000 Americans have died from COVID-19 and more than 7 million have been infected, according to data compiled Oct. 5 by Johns Hopkins University.

White House officials said earlier Monday that Trump, who has been receiving treatment at the facility since Friday, was anxious to be released.

Doctors revealed on Sunday that his blood oxygen level had dropped suddenly twice in recent days and that they gave him a steroid typically only recommended for the very sick. Still, the doctors said Trump’s health was improving and he could be discharged Monday to continue the remainder of his treatment at the White House.

The scale of the outbreak within the White House itself was still being uncovered, as press secretary Kayleigh McEnany announced she tested positive for the virus Monday morning and was entering quarantine.