The video shows the president dancing to the song, which has become a feature at recent Trump events and which has sparked a YMCA/MAGA parody mash-up. ((Credit: Ryann McEnany via Storyful)

TUCSON, Ariz. - He adjusts his coat. He gazes out at the crowd. And then he goes for it.

President Donald Trump, a man who is famously particular about his appearance, is fully embracing doing a dad dance to the Village People's “YMCA” as the finale to his rallies in the campaign's closing stretch.

He starts with the arms, clenched fists pumping back and forth — sometimes to the beat — as though he's on an elliptical trainer. He claps. He waves. And then he starts to bop his head and move his knees. On some nights, he sticks mostly to pointing and clapping. But on others, he lurches from side to side and jerks his body as the crowd cheers. 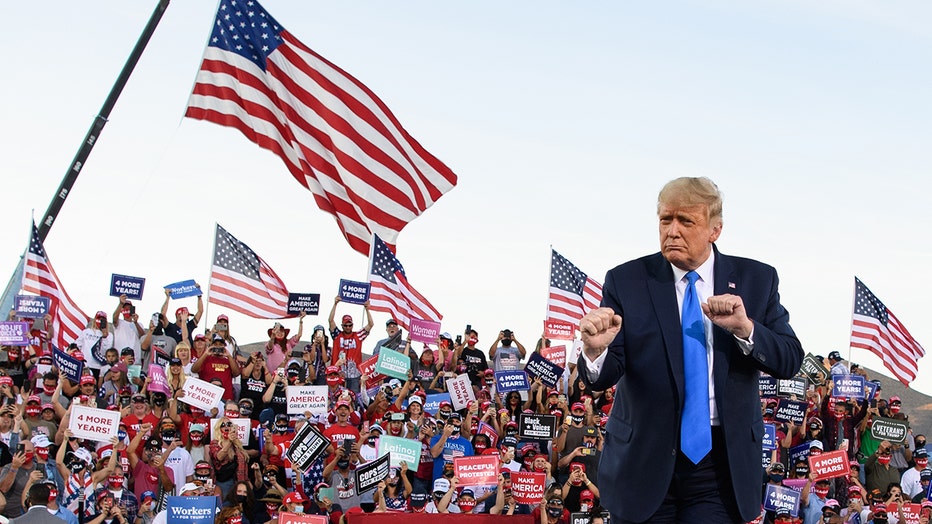 US President Donald Trump dances at the end of a rally at Carson City Airport in Carson City, Nevada on October 18, 2020.

Backstage, top staff and campaign aides often join in with the more traditional take, using their bodies to spell out Y-M-C-A to the strains of the cheesy '70s anthem.

Trump's rally dance has become a rare moment of levity in an otherwise miserable campaign year marked by a deadly pandemic, an economic recession and racial turmoil. And while Trump has largely been shunned by pop culture, the dance has spawned a viral TikTok video challenge (even though he's threatened to ban the site in the U.S.) and a parody on “The Late Show with Stephen Colbert.”

“Do you want to shake your groove thing but don’t know the steps? Then order 'Dancing with The Don’ and let President Trump teach you all the hottest moves!" Colbert's show advertised in a parody infomercial.

Trump's campaign staff and family members have also been promoting clips and copycats as the president trails in most national polls and in many battleground states just two weeks out from Election Day.

When a reporter tweeted a video showing some of Trump's campaign aides dancing along — but not Ivanka Trump's husband, Jared Kushner, a top White House adviser — Ivanka tweeted back: “Party Foul!"

Trump also danced along to YMCA during his first rally since his COVID-19 diagnosis in Sanford, Florida, on October 12.

The footage, posted by Ryann McEnany, a social media strategist for Trump’s reelection campaign and sister of White House Press Secretary Kayleigh McEnany, showed the president dancing to the song.

The video shows the president dancing to the song, which has become a feature at recent Trump events and which has sparked a YMCA/MAGA parody mash-up. (Credit: Ryann McEnany via Storyful)

The efforts to make the dance “a thing” come as the president has been trying to demonstrate his vigor after returning to the campaign trail following his infection with the coronavirus, which put him in the hospital for three nights.

It has drawn a scowl from others, including CNN’s Don Lemon, who criticized Trump for dancing to the song during a pandemic that has killed so many.

“That can’t be taken away no matter how many times he goes to rallies and dances to the Village People,” Lemon said. "He is having fun and dancing on the graves of 215,000 Americans. Dancing.”

“YMCA,” widely considered a gay anthem, is a relatively new addition to Trump's rally playlist. It was swapped in this year after the Rolling Stones threatened in June to sue if Trump didn’t stop using their song “You Can’t Always Get What You Want" as his rally closer.

Trump’s eclectic rally soundtrack — an integral part of the events — has sparked numerous threats of legal action, along with group sing-alongs, crowd dance sessions, confused stares and even boos.

In the early days, the list was heavy on the Rolling Stones and Aerosmith (until they also threatened legal action), along with Trump favorites like Adele (until she objected) and the late tenor Luciano Pavarotti’s “Nessun Dorma” (until his wife objected, too.)

Throughout much of 2016, the Backstreet Boys and ’N Sync were rally staples, as have been ballads from Broadway musicals including "The Phantom of the Opera," "Cats," and “Les Misérables."

“Macho Man," also by the Village People, is another recent add.

The Village People have said they are OK with Trump’s use of their songs.

“Since our music is not being used for a specific endorsement, the President’s use is “perfect(ly)” legal,” they wrote on Facebook in February. “Like millions of Village People fans worldwide, the President and his supporters have shown a genuine like for our music. Our music is all-inclusive and certainly everyone is entitled to do the YMCA dance, regardless of their political affiliation.”

“Having said that,” they added, “we certainly don’t endorse his use as we’d prefer our music be kept out of politics.’

Trump's campaign declined to say who had the idea to use “YMCA” as his closing song — though members of his traveling entourage have jokingly tried to take credit.

Trump campaign adviser Jason Miller agreed to reveal the secret to an AP reporter “only if we first get a clip of you singing YMCA.”