RICHMOND, Va. - The case of the U.S. Army lieutenant who was pepper sprayed, struck and handcuffed by police in rural Virginia, started Monday in a Federal Court in Richmond, Virginia.

Lawyers representing Caron Nazario will argue to a jury that he was assaulted and falsely imprisoned and that his vehicle was illegally searched.

Video of the 2020 traffic stop got millions of views the next year after Nazario filed the federal lawsuit that is now being heard, highlighting fears of mistreatment among Black drivers and intensifying the scrutiny of the boundaries of reasonable, and legal, police conduct.

The episode also served as a grim signal to many Black Americans that military uniforms don’t necessarily protect against abuse of authority by law enforcement. 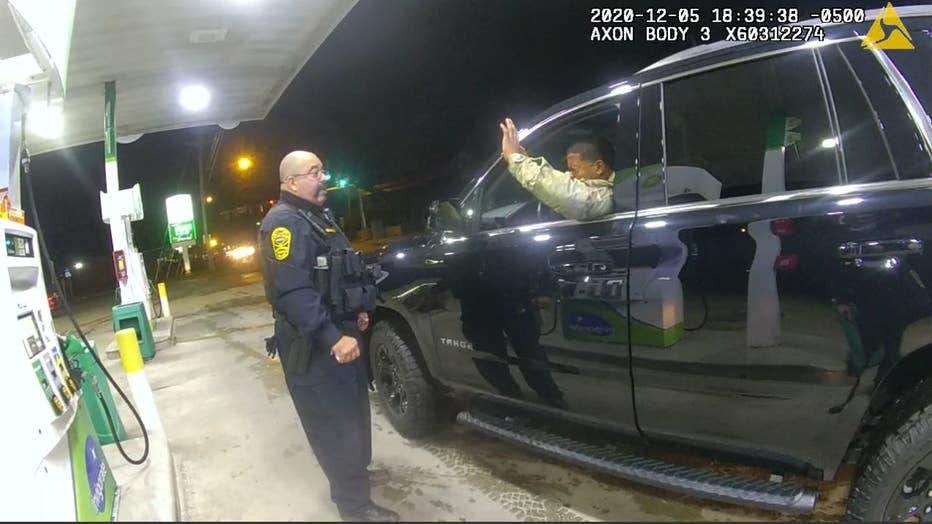 Video shows Windsor police officers Daniel Crocker and Joe Gutierrez pointing handguns at a uniformed Nazario behind the wheel of his Chevy Tahoe at a gas station. The officers repeatedly commanded Nazario to exit his SUV, with Gutierrez warning at one point that Nazario was "fixing to ride the lightning" when he didn’t get out.

Nazario held his hands in the air outside the driver’s side window and continually asked why he was being stopped.

Officer will not face criminal charges in Windsor traffic stop

A former police officer in Virginia should not be criminally charged but should be investigated for potential civil rights violations after he pepper-sprayed, struck and handcuffed a Black U.S. Army lieutenant during a 2020 traffic stop, a special prosecutor has determined.

Nazario also said: "I’m honestly afraid to get out."

"You should be," Gutierrez responded.

Nazario stayed in the vehicle. Gutierrez went on to pepper spray him through the open window. Once Nazario exited the SUV, the officers commanded him to get on the ground, with Gutierrez using his knees to strike Nazario’s legs, the lawsuit states.

Since the traffic stop, Nazario has developed anxiety, depression and PTSD, according to his lawsuit. He has been unable to leave home at times due to "hypervigilance regarding the potential for harassment by law enforcement," court filings state.

A psychologist found that Nazario, who is Black and Latino, suffers from race-based trauma associated with violent police encounters, which can exacerbate injuries "in ways that do not commonly affect the white populations."

"The officers involved not only assaulted Mr. Nazario, but pointed their weapons directly at him and, at some point during the encounter, threatened to kill him," the suit alleges. "Mr. Nazario recalls that he thought he was going to die that evening."

Nazario is suing Crocker and Gutierrez. Crocker is still on the force, but Gutierrez was fired in April 2021, the same month Nazario filed his lawsuit.

The men deny ever threatening to kill Nazario. They contend that Nazario misconstrued Gutierrez’s statement that Nazario was "fixing to ride the lightning." Gutierrez spoke those words while holstering his gun and drawing his Taser and was referencing his stun gun, not an execution, according to court filings.

Crocker and Gutierrez argue that they performed their duties within the law after Nazario failed to immediately pull over and refused to exit his vehicle. Plus, a federal judge already found they had probable cause to stop Nazario for an improperly displayed license plate, and to charge him with eluding police, as well as obstruction of justice and failure to obey.

Officials in Virginia say a police officer accused of using excessive force during a traffic stop of a Black Army officer has been fired hours after the state's governor called for an independent investigation into the incident.

"To the extent Mr. Nazario claims mental anguish or other psychological injuries, Mr. Nazario is still in the Virginia National Guard — there is no evidence he has been medically retired or otherwise discharged in connection with this incident," according to a trial brief filed by Gutierrez in late November. "In fact, shortly after the traffic stop, Mr. Nazario deployed to Washington, D.C. in support of the January 6, 2021 disturbance."

Nazario, a medical officer, said he arrived after the insurrection occurred, according to a deposition.

Besides Nazario’s lawsuit, fallout from the traffic stop includes a lawsuit brought by the state attorney general that alleges Windsor discriminated against Black Americans. The small town is about 70 miles (110 kilometers) southeast of Richmond.

In August, a special prosecutor determined that Gutierrez should not be criminally charged but should be investigated for potential civil rights violations.