Officer will not face criminal charges in Windsor traffic stop

A former police officer in Virginia should not be criminally charged but should be investigated for potential civil rights violations after he pepper-sprayed, struck and handcuffed a Black U.S. Army lieutenant during a 2020 traffic stop, a special prosecutor has determined.

NORFOLK, Va. - A former police officer in Virginia should not be criminally charged but should be investigated for potential civil rights violations after he pepper-sprayed, struck and handcuffed a Black U.S. Army lieutenant during a 2020 traffic stop, a special prosecutor has determined.

The prosecutor’s findings are the latest fallout from a confrontation involving two police officers and a uniformed military officer that drew outrage and national attention to the small town of Windsor, about 70 miles (113 kilometers) southeast of Richmond.

The man who was pulled over, Caron Nazario, was never charged. Video of the December 2020 traffic stop surfaced in April 2021 after Nazario sued in federal court, alleging that his constitutional rights were violated. The images sparked outrage and served as a grim reminder to many Black Americans that a military uniform doesn’t necessarily protect against mistreatment by police.

In December, then-Virginia Attorney General Mark Herring’s office sued the town, alleging that it operated in a way that discriminated against Black Americans.

One of the officers, Joe Gutierrez, was fired from the department. He was the target of the special prosecutor’s criminal probe.

Officials in Virginia say a police officer accused of using excessive force during a traffic stop of a Black Army officer has been fired hours after the state's governor called for an independent investigation into the incident.

"Although I find the video very disturbing and frankly unsettling, Gutierrez’s use of force to remove Nazario did not violate state law as he had given multiple commands for Nazario to exit the vehicle," special prosecutor Anton Bell said in his report, dated July 29 and posted online by Nazario’s attorneys.

"The problematic issue, however, were Gutierrez’s statements throughout the entire ordeal, which would lead a reasonable person to wonder whether underlying bias was at the root of how and why Nazario was treated in like manner," Bell wrote.

Bell’s findings were first reported Monday by The Virginian-Pilot newspaper.

The incident began when Nazario was driving home from his duty station, according to his lawsuit. Officer Daniel Crocker radioed that he was attempting to stop a vehicle with no rear license plate and tinted windows.

Crocker said the driver was "eluding police" and he considered it a "high-risk traffic stop," according to a report that’s included in the lawsuit. One of Nazario’s attorneys, Jonathan Arthur, later explained that Nazario was trying to stop in a well-lit area "for officer safety and out of respect for the officers."

The other officer, Gutierrez, was driving by and decided to join the traffic stop, the lawsuit stated. By the time the two officers reached Nazario’s SUV, the license plate was visible in the rear.

When Nazario stopped at a well-lit gas station, the two officers immediately drew their guns and pointed them at Nazario, his lawsuit alleges. The officers then attempted to pull Nazario out of the vehicle while he continued to keep his hands in the air. Gutierrez pepper-sprayed Nazario multiple times as the officers yelled for him to get out.

At one point, Gutierrez told Nazario he was "fixin’ to ride the lightning," a reference to the electric chair that was also a line from the movie "The Green Mile," a film about a Black man facing execution, the lawsuit said.

Nazario got out and asked for a supervisor. Gutierrez responded with "knee-strikes" to his legs, knocking him to the ground, the lawsuit says. The two officers struck him multiple times, then handcuffed and interrogated him. 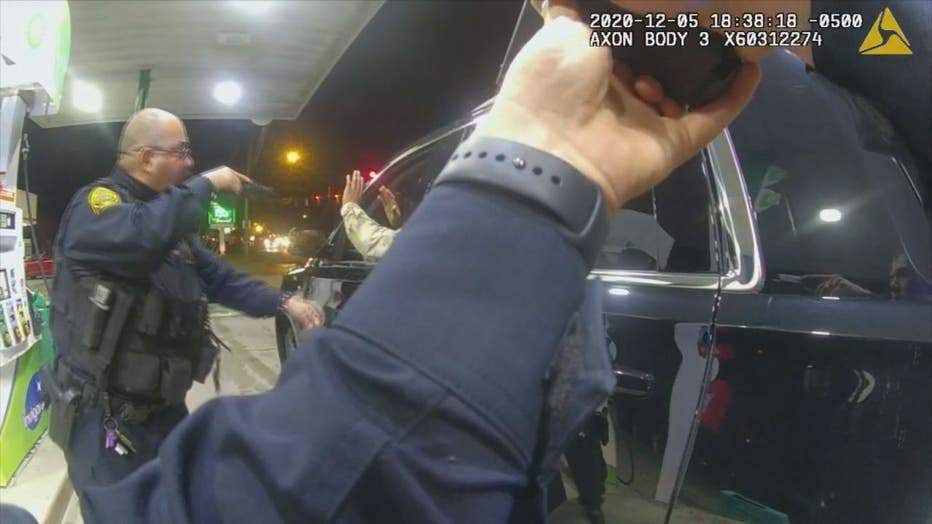 The traffic stop was captured on Nazario’s cellphone as well as the officer’s body-worn cameras.

Tom Roberts, another attorney representing Nazario, told The Associated Press on Tuesday that a judge or a jury, not a special prosecutor, should have determined whether Gutierrez violated the law.

"I think that there’s sufficient evidence to show that he was intentional in his actions," Roberts said. "And I believe that he exceeded any authority to use force, and therefore he committed assault and battery."

Roberts said that would have been a misdemeanor offense, for which the statute of limitations is one year, well before the special prosecutor released his findings.

"All too often, when it comes to law enforcement violating the laws, we see our Commonwealth’s Attorneys fail to apply the same zeal at prosecuting law enforcement as they do with other offenders," Roberts’ firm said in a statement.

Windsor’s police chief on Wednesday publicly acknowledged that an officer who was involved in a confrontational traffic stop involving a Black Army lieutenant was only fired when the public outcry became too much to ignore.

John Becker Mumford Jr., an attorney listed for Gutierrez in Nazario’s lawsuit, did not respond to an email seeking comment.

In February, the town of Windsor asked a court to dismiss the state attorney general’s lawsuit, arguing that it only refers to one person — Nazario — "in a cursory and inconclusive manner."

Jason Miyares, who defeated Herring in November’s election, took over as Virginia’s AG in January. Victoria LaCivita, a spokeswoman for Miyares’ office, said Tuesday that the lawsuit is still pending..