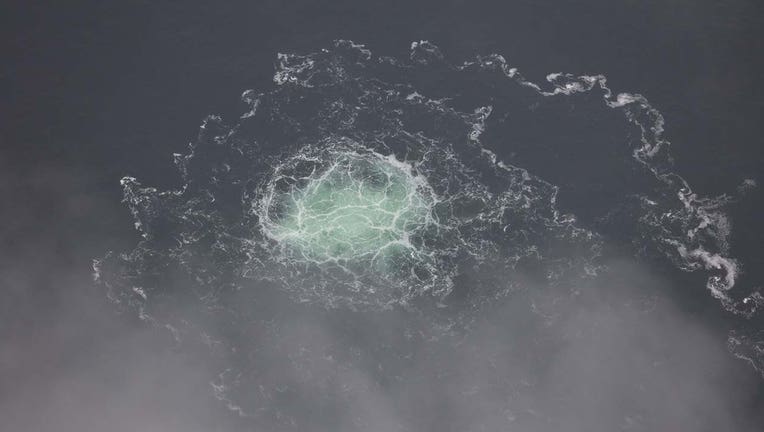 In this Handout Photo provided by Swedish Coast Guard, the release of gas emanating from a leak on the Nord Stream 2 gas pipeline in the Baltic Sea on September 28, 2022 in At Sea. A fourth leak has been detected in the undersea gas pipelines linking

Mats Ljungqvist of the Swedish Prosecution Authority said the investigators carefully documented the area where the Nord Stream 1 and 2 pipelines ruptured in September, causing significant methane leaks. The parallel undersea pipelines run from Russia to Germany.

"Analysis carried out shows traces of explosives on several of the foreign objects that were found" at the site, Ljungqvist said in a statement.

The prosecution authority said the preliminary investigation was "very complex and comprehensive" and further scrutiny would show whether anyone could be charged "with suspicion of crime."

Investigators in Sweden, Denmark and Germany are looking into what happened. Danish officials confirmed in October that there was extensive damage to the pipelines caused by "powerful explosions."

The leaks, which stopped after several days, occurred in international waters but within the exclusive economic zones of Denmark and Sweden. Investigators have not given indications of whom they think might be responsible but reported earlier that the blasts were likely to have involved several hundred pounds of explosives.

Kremlin spokesman Dmitry Peskov said Friday it was "very important to find those who are behind the explosion."

Sweden's findings of "a sabotage act or a terrorist act -- you can call it whatever you like" confirm "the information that the Russian side has had," Peskov said. Moscow needs to wait for a full damage assessment to decide whether to repair the pipelines, he said.

Ministers from Organization of the Petroleum Exporting Countries (OPEC+) on Wednesday said they would cut oil production by 2 million barrels a day in a move that is expected to raise oil prices globally. President Biden said, "[he] is disappointed by the shortsighted decision by OPEC+ to cut production quotas while the global economy is dealing with the continued negative impact of Putin’s invasion of Ukraine."

The governments of Denmark, Germany and Sweden have refrained from speculating over who may be behind the sabotage, saying only that there's no sufficient proof yet to identify the perpetrator.

"We have no information on possible initiators of this act of sabotage," German Chancellor Olaf Scholz’s spokesman, Steffen Hebestreit, said at a regular government news conference in Berlin on Friday.

But some Nordic and other European media outlets have pointed a finger of blame on Moscow, hosting military experts suggesting that Russia has all the resources to carry out such a precise attack requiring careful advance planning.

Fatih Birol, head of the International Energy Agency, said late September it was "very obvious" who was responsible of the pipeline sabotage, suggesting Russia’s involvement.

Russian President Vladimir Putin has accused the West of blowing up the pipelines and singled out the United States as profiting from attacks on Europe’s energy infrastructure.

Earlier this week, Germany marked the completion of port facilities for the first of five planned liquefied natural gas terminals it is scrambling to get running as it replaces the Russian pipeline gas that once accounted for more than half its supplies.