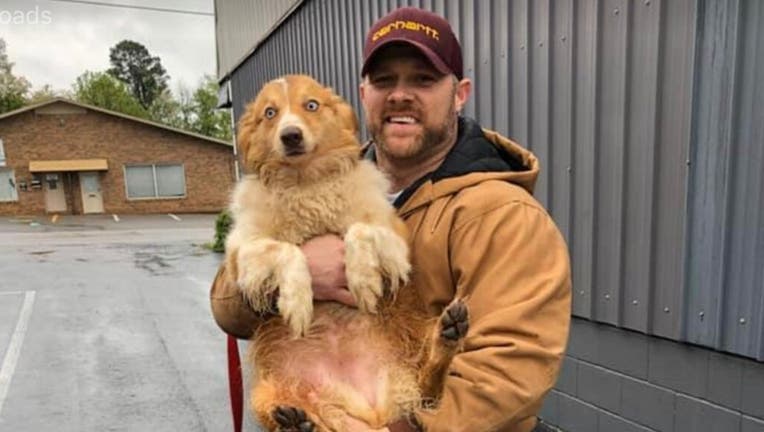 In this image taken Sunday, Bella, an Australian shepherd, is held by her owner Eric Johnson in Cookeville, Tenn. The dog was found Sunday after being missing for 54 days following a tornado that ravaged Putnam County and flattened the Johnson’s fami

COOKEVILLE, Tenn. - A Tennessee family was reunited with their dog nearly two months after she went missing when tornadoes ripped through their home in early March.

Bella, the Australian shepherd who was missing for 54 days, was found on Sunday, WTVF-TV reported. She alerted Eric and Faith Johnson to a tornado that ravaged Putnam County moments before it flattened the Johnson’s family home.

“This is amazing because to have her back with us, it completes our family now and puts a missing piece back,” Eric Johnson said.

Faith Johnson told the outlet last month she was recovering from two broken ribs that resulted from holding on to her two children too tightly during the storm. The tornado also injured her husband, who was blown off his family while he crouched over them inside their bathtub.

While they lost their home, the family survived the tornadoes that killed 18 people in Putnam county and 24 people in the state. Since then, they have been on the hunt for their beloved pet.

Bella was seen around the neighborhood by several witnesses, and the Johnsons, who were stationed in a hotel, would visit their old neighborhood to leave pieces of clothes so she would remember the scent.

She was spotted once again this Friday, and Sarah Romeyn, a friend of the Johnsons who tracks missing animals after storms, received a call about her. Romeyn set up cameras on a fence between two buildings, and was able to capture Bella after the Australian shepherd came out to eat food Romeyn put out for her.

Eric Johnson helped with Bella’s capture on Sunday after getting a call from Romeyn. She was then taken to a pet grooming store to receive care.

The family told WTVF-TV earlier this month that they plan to rebuild their house in the same place the tornado tore it apart last month. “We’re not going to let fear run us from our property and our home,” Faith Johnson said.