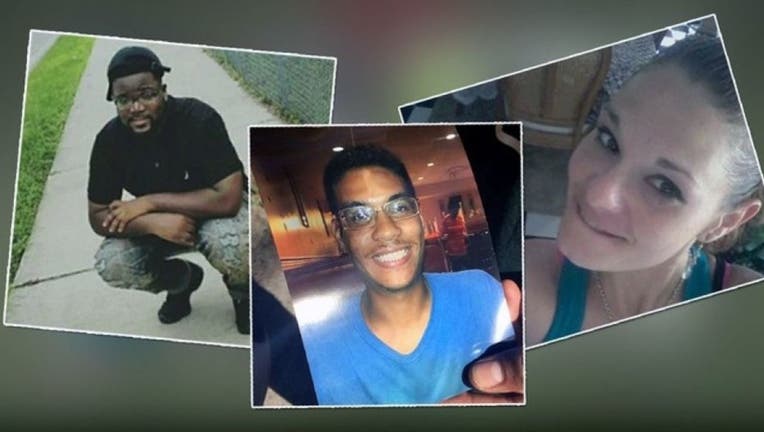 TAMPA, Fla. (AP) -- Police believe the fatal shooting of a 20-year-old autistic man who took the wrong bus home from work on Thursday night is linked to two other suspicious deaths in a Florida neighborhood.

The deaths, which took place in the same neighborhood over the past 10 days, prompted Tampa police to warn residents in the Seminole Heights neighborhood not to walk alone at night. And they've asked residents to leave porch light and other external lights on at night.

"Now we have someone terrorizing the neighborhood," Interim Tampa police Chief Brian Dugan said during a Friday news conference.

He said the three victims have no ties to one another. Dugan asked the public to look at surveillance video of a man who was walking in the area on Oct. 9 when Benjamin Mitchell, 22, was killed. On Oct. 13, Monica Caridad Hoffa, 32, was found dead in a vacant lot.

On Thursday night, officers were patrolling in the area when they heard gunshots. Dugan said they rushed to the area, where they found Anthony Taino Naiboa dead on the sidewalk, about 100 yards (91 meters) from where one of the other victims was killed.

"You can imagine the frustration of these officers to hear gunshots and not be able to find this person," Dugan said. "He was in the prime of his life and was taken instantly."

Investigators have few leads. Officers have blanketed the neighborhood, are talking to residents and showing them the video of the man walking.

"It's clear to me that they're all linked," Dugan said. "I'm convinced we are going to catch this person. It's frustrating and it makes me angry they are able to vanish so quickly."

He said the FBI and the Hillsborough and Pinellas county sheriff's officials have pledged support.