Another vehicle was stolen from a Northwest Ruth's Chris Steak House. FOX 5's Stephanie Ramirez spoke with Michael Lawson, a Ruth's Chris patron, who says his keys were stolen from the lockbox over the weekend while he was out to eat dinner with his family.

According to a police report, three suspects broke the valet lockbox Sunday and stole key fobs to five vehicles. The report says the suspects returned and allegedly assaulted one of the workers who tried to stop them from making off with a second vehicle.

Investigators say the suspects fled in a white Infiniti last seen heading eastbound along the 2000 block of L Street.

Police released the following surveillance footage of the incident:

Metropolitan Police Department officials have released surveillance footage of two persons of interest and a vehicle of interested related to theft of a car that was stolen from a valet at a Ruth's Chris Steak House in D.C.

Investigators say they are looking for two person of interest and a vehicle of interest in the case.

On Christmas, police say two suspects stole a Mercedes-Benz from the valet after breaking into the key box. Officers say they struck another vehicle while trying to flee the scene.

The valet attendant in that case told police he was parking another vehicle when the keys were stolen from the valet's podium, which was reportedly locked. Police located the stolen vehicle on Dec. 26 in an alley, where it had been set on fire.

"Had I known that that happened the first time and knowing that this was the second time, I don’t know …  I got mixed emotions about it," said Charles County resident, Michael Lawson. "The food was delicious. The service was great but the end all-be-all was just terrible." 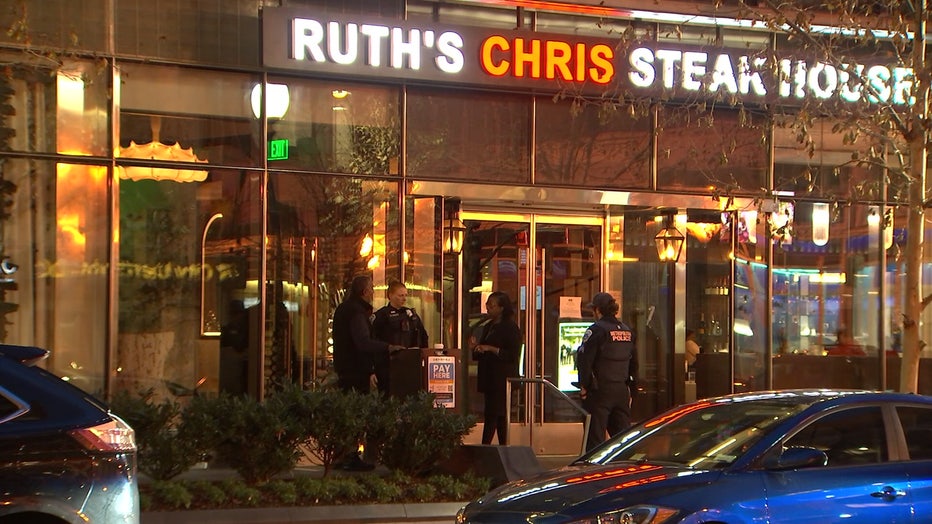 Lawson said he and his family were at the steak house on Sunday to celebrate both the new year and his wife's birthday. He told FOX 5 that he left the restaurant to find police blocking in his car, so the thieves couldn't come back and steal it after his keys were stolen.

Lawson was very upset while speaking with FOX 5. He said he was quoted around $1,200 to replace two key fobs that were actually stolen. His Cadillac and Toyota fobs were on the same key ring.

The valet company involved, Crystal Parking, said they would pay for his replacements, but Lawson said he was having trouble getting ahold of the company earlier.

Tuesday afternoon, a company spokesperson confirmed they were working on the matter.

In a statement to FOX 5, Crystal Parking said: "Security is and always has been a primary concern at Crystal Parking. These unfortunate incidents occurred at Ruth’s Chris, where we provide valet services. As the thieves broke into the locked cabinet where keys were kept when customer vehicles were being retrieved, for added security, the podium has been moved from the street in front of the restaurant to inside Ruth’s Chris. In response to the increase in crime throughout the city, we continue to do all we can to proactively address security concerns and respond swiftly to those that nonetheless occur."