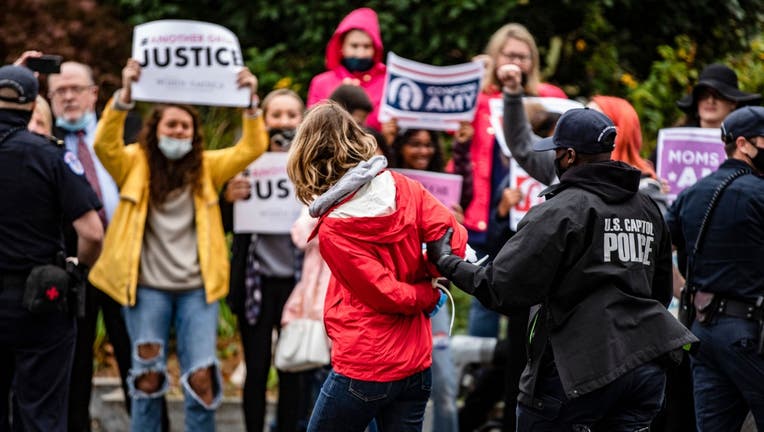 A protestor is arrested by Capitol Police after blocking an entrance to the Dirksen Senate Office Building the morning that the confirmation hearings begin for Judge Amy Coney Barrett to become an Associate Justice on Capitol Hill on October 12, 2020

The Senate Judiciary Committee will hold its first day of formal hearings for Supreme Court nominee Amy Coney Barrett today. In this installment of Monday Morning Quarterback, we'll discuss those hearings and other issues on Capitol Hill.

They charged the various protesters with crimes including crowding, obstructing, or incommoding. One protester was charged with unlawful conduct.

More than 100 protesters were arrested in D.C. during October 2018 protests over controversial nominee Brett Kavanaugh.

Republicans appeared to have the votes to confirm the 48-year-old conservative judge to a lifetime seat on the Supreme Court, barring any major development.

If confirmed, Barrett would move the balance of the court to a 6-3 conservative majority.