A super pod of dolphins was seen off the coast of Dana Point, California.

DANA POINT, Calif. - A couple of lucky seafarers witnessed a "super pod" of dolphins swimming alongside a boat carrying whale watchers on March 14.

Video of the spectacular sight captured what looked like dozens of dolphins swimming together off of Dana Point, California.

Onlookers who were on a Dana Wharf whale watching tour marveled as the dolphins swam so quickly that the ocean appeared to be white rather than its normal blue.

Dolphins typically remain in core groups of about 25 to 50, but sometimes they will come together with other pods to form a mega pod or super pod. 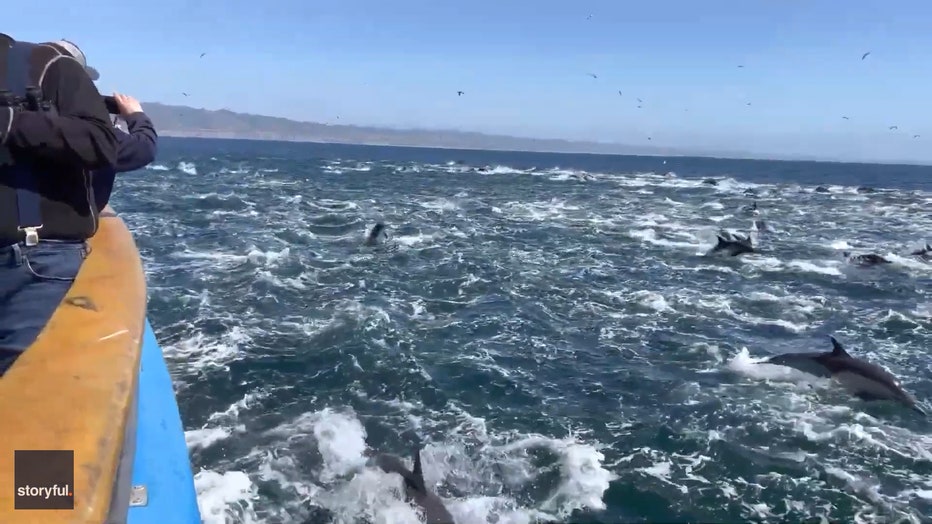 Freeze frame of video capturing a super pod of dolphins off the coast of Dana Point, California on March 14.

"Super pods occur when multiple groups of dolphins converge during times of mating or hunting opportunities, though these giant groupings don’t last very long and are very rare to spot. Once activity has died down, dolphins will return back to their smaller pods," according to the National Marine Sanctuary Foundation.

While it is a rare occurrence, it is not the first time Californians have witnessed such an amazing natural occurrence. In May of 2020, a group of at least 1,000 dolphins was seen swimming in a giant pod off the coast of Laguna Beach.

Riders aboard a boat with Newport Coastal Adventures were able to watch as thousands of dolphins splashed about and corralled their food.

FOX News, Storyful and FOX 13 News contributed to this report.