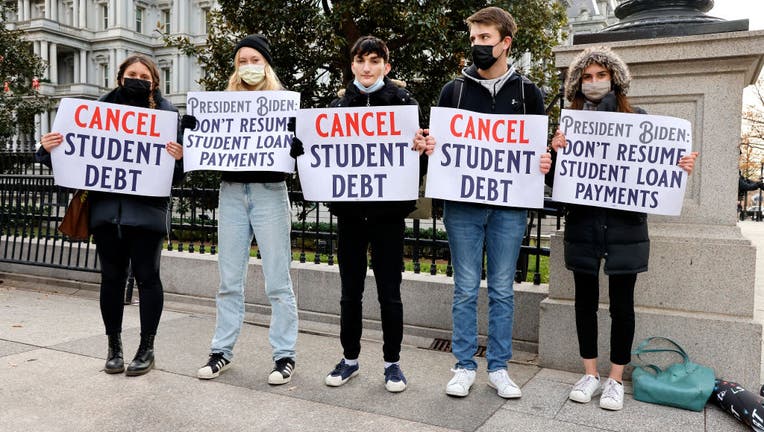 WASHINGTON, DC - DECEMBER 15: Activists call on President Biden to not resume student loan payments in February and to cancel student debt near The White House on December 15, 2021 in Washington, DC. (Photo by Paul Morigi/Getty Images for We, The 45

WASHINGTON - The Biden administration on Wednesday extended a student loan moratorium that has allowed millions of Americans to put off debt payments during the pandemic.

Under the action, payments on federal student loans will remain paused through May 1. Interest rates will remain at 0% during that period, and debt collection efforts will be suspended. Those measures have been in place since early in the pandemic, but were set to expire Jan. 31.

President Joe Biden said financial recovery from the pandemic will take longer than job recovery, especially for those with student loans.

"We know that millions of student loan borrowers are still coping with the impacts of the pandemic and need some more time before resuming payments," he said in a statement.

President Joe Biden spoke about the November 2021 jobs report, which showed U.S. employers slowed the pace of their hiring in November, adding 210,000 jobs, during remarks on Dec. 3, 2021, at the White House.

The omicron variant of COVID-19 that has swept through the U.S. with a fury has lent a new urgency to the question over whether the moratorium would be extended. Administration officials had initially said they expected the January extension to be the last. But even as the economy improves, there are concerns that borrowers are not ready to start payments again. Once the moratorium ends, those who were already behind on payments could have wages and benefits taken away as part of debt collection efforts.

The policy applies to more than 36 million Americans who have student loans that are held by the federal government. Their collective debt totals more than $1.37 trillion, according to the latest Education Department data. About a third of borrowers are in default or delinquency and the average monthly payment is $400 a month.

Education Secretary Miguel Cardona said in a statement that the extension will allow for repayment plans responsive to the financial needs of the students, including an income-driven repayment plan.

The continued pause "will provide critical relief to borrowers who continue to face financial hardships as a result of the pandemic, and will allow our administration to assess the impacts of omicron on student borrowers," Cardona said.

The Trump administration initially suspended federal student loan payments in March 2020 and later extended it through January 2021. Biden has now moved to continue it twice, and the Education Department raised concerns about the effects of suddenly restarting payments, both for students and administratively within the department.

The extension of the loan moratorium comes as decision whether to erase large swaths of student debt altogether is still on the table.

Some Democrats are pushing for mass forgiveness of debt. But Biden has questioned whether he has the authority for that kind of mass cancellation, and legal scholars differ on that. Earlier this year, Biden asked the Education and Justice departments to study the issue. Officials have said that work is still underway.

Biden has previously said he supports canceling up to $10,000 in student debt, but he has argued it should be done by Congress.

Meanwhile, in October, the administration relaxed the rules for the student loan forgiveness program it has in place already, ditching some of the toughest requirements around the program that was launched in 2007 to steer more college graduates into public service.

Biden said that he was also asking all student loan borrowers to "do their part as well." He said they should take full advantage of Education Department resources as they prepare for payments to resume, look at options to lower payments through income-based repayment plans, explore public service loan forgiveness, and make sure you are vaccinated and boosted when eligible."