1-2% of bugs lost every year due several factors, scientists say

Scientists worry that the world is losing about 1% or 2% of its insects each year.

NEW YORK - The spotted lanternfly at first glance may seem like an innocent beautiful creature worthy of any Instagram post. But U.S. officials are pleading with anyone who comes across these critters to kill them on sight.

Native to Asia, the colorful planthopper is an invasive species that sucks the sap from valuable trees and vines, weakening them. It produces a clear, sticky, sugary waste. Besieged residents have been killing them by the thousands.

The spotted lanternfly is believed to weaken, though not necessarily kill, trees like maple, oak and black walnut. A greater economic threat than tree mortality is the prospect that states and nations could limit imports from Pennsylvania in an effort to prevent the bugs’ spread, according to Wayne Bender, who leads the Pennsylvania Hardwoods Development Council, part of the state agriculture department.

In Pennsylvania, state workers have begun spraying insecticide on spotted lanternflies, a new strategy that state officials are using in an attempt to slow the spread of the invasive pest.

Crews using backpack sprayers and truck-mounted spray equipment are spraying the bugs along railways, interstates and other transportation rights-of-way, the state Department of Agriculture in May. Lanternflies primarily spread by hitching rides on vehicles traveling out of infested areas, officials said.

The active ingredient of the insecticide, bifenthrin, is highly toxic to fish and bees. The Agriculture Department said the insecticide will not be used near water or flowering plants and it will conduct regular environmental sampling to monitor impacts. 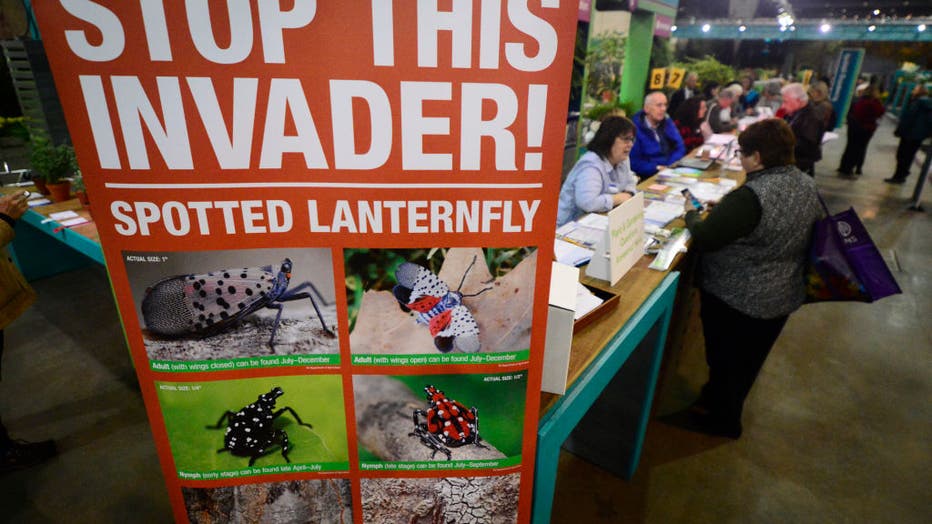 Large banner at the Philadelphia Flower Show information desk informs visitors about the invasive spotted lanternfly, as the annual event draws thousands to the Pennsylvania Convention Center, in Philadelphia, PA, on March 1, 2019. (Photo by Bastiaan Slabbers/NurPhoto via Getty Images)

"Spotted Lanternflies threaten our quality of life outdoors and destroy valuable products that feed our economy," Agriculture Secretary Russell Redding said in a statement Friday. "We are working diligently and strategically to control this pest in ways that are safe for the people, pollinators, plants and animals that share the environment it threatens."

Spraying is underway in southeastern and south-central Pennsylvania, where more of the insects have hatched, and will be scheduled in other areas of the state as the season progresses.

A study conducted last year found that the invasive species is wreaking havoc on Pennsylvania’s local flora that it’s costing the state upwards of about $50 million and reportedly caused hundreds to lose their jobs.

The study represents researchers’ first attempt to quantify the destruction caused by the large, colorful planthopper.

First detected in the U.S. in 2014, in Pennsylvania’s Berks County, it has since overrun the state’s southeastern corner and spread into nearby states including New Jersey, Delaware and Virginia.

In New York, the state’s Department of Parks & Recreation praised one Twitter user for killing one of the invasive bugs.

"Have no fear, you are a civic hero! Spotted lanternflies are a threat to our city's forests. NYC, be like Sara! If you see a spotted lanternfly, squish it, dispose of it, and report it to us at http://nyc.gov/parks/slf," wrote NYC Parks on Twitter.

"Killed a spotted lanternfly today. was it justifiable homicide? Will i be acquitted of this crime?" quipped Twitter user Sara London.