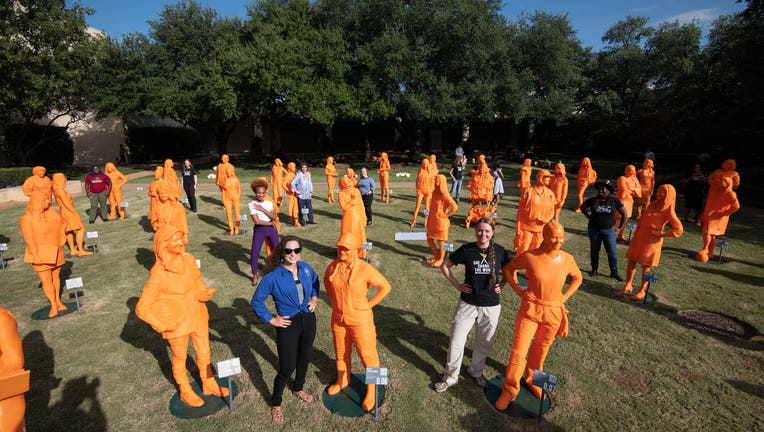 The "#IfThenSheCan — The Exhibit" features 3D-printed statues depicting women who have excelled in the fields of science and technology. (Credit: IF/THEN)

WASHINGTON - One hundred twenty life-size neon orange statues are on display at the Smithsonian Gardens and in select museums in honor of Women’s History Month.

The 3D-printed statues depict women who have excelled in the fields of science and technology.

The "#IfThenSheCan — The Exhibit" runs from March 5-27. A statement announcing the display called it "the largest collection of statues of women ever assembled together."

The statues depict women who have excelled in STEM fields: science, technology, engineering and math. These range from Jessica Esquivel, one of only 150 Black women with a PhD in physics in the country, to Karina Popovich, a college student who produced over 82,000 pieces of 3D-printed PPE for healthcare workers in the early days of the pandemic.

Each statue will feature a QR code that links to the personal story of the depicted woman.

The statues have been previously displayed in Dallas, and a handful of them were in New York’s Central Park Zoo.

Hear from some of the network's biggest female stars about what inspires them.

Ellen Stofan, the Smithsonian’s under secretary for science and research, said in a statement that the exhibit, "provides the perfect opportunity for us to show that women have successfully thrived in STEM for decades, while also illustrating the innumerable role models young women can find in every field."

The display will feature the Smithsonian’s oldest museum, the Arts + Industries Building — which only reopened last year after being closed to the public since 2004.

"These women are changing the world, and providing inspiration for the generation that will follow them," said Arts and Industries Building Director Rachel Goslins in a statement.