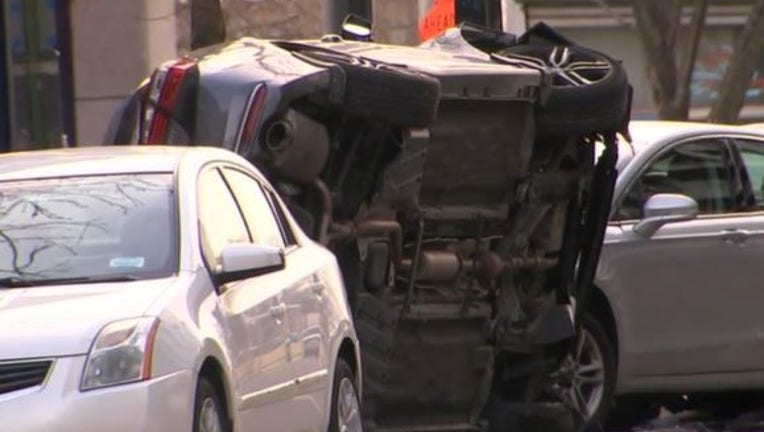 66-year-old Mohammed Anwar is dead after a carjacking this week on Van Street in Southeast DC.

WARNING: Video may be disturbing to some viewers

66-year-old Mohammad Anwar is dead after a carjacking this week on Van Street in Southeast DC.

You can also hear some of the last words spoke by the driver, Mohammad Anwar, who shouts "This is my car!" as he is being robbed Tuesday.

The suspects then hit the gas while Anwar is still hanging on the driver's side door.

The car sideswipes a nearby metal barrier and light pole, causing the open driver’s side door to violently slam into Anwar’s body.

The car then races down the block and out of sight, turning a corner on to N Street SE before you hear a crash.

The video then shows both girls jump from the wrecked vehicle, and Anwar face down on the sidewalk.

The incident was reported around 4:30 p.m. Tuesday close to Nationals Park near the Navy Yard Metro station.

The girls, said to be 13 and 15 years old, were allegedly armed with stun guns.

The juvenile suspects have not been named and are charged with felony murder and armed carjacking (taser). Police said for at least one suspect, it was not her first crime in recent months.

DC Police Acting Chief Robert Contee just spoke with FOX 5 explaining why the teens involved in last week’s fatal carjacking outside of Nats Park should not be tried as adults.

"We also know that at least one of them had been arrested in something very similar back in January where they were arrested for that as well," said Cmdr. Ramey Kyle. "So it does seem there was a pattern there."

The murder case has gotten worldwide attention, in part because of a video viewed millions of times that shows the moments after the carjacking.

The teens are charged with felony murder and armed carjacking. Their next court date is Wednesday, March 31.

This year in D.C., carjackings have surged 350 percent this year over this time last year. In 2020, there was a spike of nearly 150 percent over the year before.

Prince George’s County has also seen a significant spike with carjackings up nearly 200 percent this year over last.

Devastation, confusion, shock, anger, heartache, and anguish – those are the words on a GoFundMe page, describing how a Springfield, Virginia family is feeling, after their loved one was killed in an armed carjacking yesterday afternoon.

"This current carjacking and robbery uptick we can definitely say that many of those crimes are being committed by juveniles," said Kyle.

Anwar was a Pakistani immigrant and father of three. Loved ones say he immigrated to the United States to build a better life for his family.

Family gathered Sunday to remember his life, holding a special prayer service for Anwar at his mosque. His funeral was Friday, according to family.

He lived in Springfield, Va. A GoFundMe page for Anwar's family had raised more than $530,000 as of Sunday afternoon.