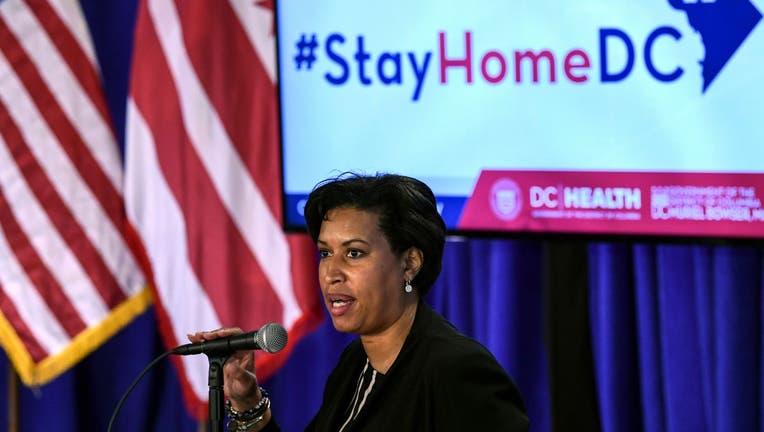 District of Columbia Mayor Muriel Bowser joins other District officials as they provide an update on the Districts financial forecast in regards to the covid-19 pandemic on Friday, April 24, 2020. (Photo by Toni L. Sandys/The Washington Post via Gett

WASHINGTON - Washington, D.C., Mayor Muriel Bowser is taking heat for sharing a video on "preventing auto thefts" following the death of Mohammad Anwar, who died just days ago after two teen girls allegedly tasered him to steal his vehicle.

"Auto theft is a crime of opportunity. Follow these steps to reduce the risk of your vehicle becoming a target. Remember the motto, #ProtectYourAuto," Bowser wrote on Twitter on Sunday.

"Horrible timing on this clearly scheduled tweet. And even if Mohammed Anwar wasn’t dead, carjackings are a plague in DC — there isn’t a lot you can do [with regard to] risk reduction besides simply not driving a car. This was broad daylight," journalist Natalia Antonova wrote on Twitter.

"Blame the victim huh? How about cracking down on perpetrators to deter this behavior?" Twitter user Jesse Hunt wrote.

"Uber Eats driver Muhammad Anwar was the victim of a carjacking by two teenage girls, who committed felony murder, in DC. He died as a result of injuries. I presume this is a scheduled tweet but it’s extremely tone deaf. Bowser’s silence is deafening," media strategist Gabriella Hoffman wrote on Twitter.

Two teenage girls fought Anwar, a 66-year-old UberEats delivery driver, for control of his car, leaving him dead as he was flung from the vehicle when it wrecked. The suspects, who police say are ages 13 and 15, have been charged with murder.

The suspects, who police say are ages 13 and 15, have been charged with murder in the death of Anwar.

One of the girls told D.C. police officers that they had set out with a stun gun to steal a car on Tuesday, according to court testimony from homicide unit Detective Chad Leo.

The girls got into Anwar’s car around 4:30 p.m. at the Navy Yard Metro Station as he was making deliveries, Leo said.

Anwar drove the girls to Nationals Park where he pulled his car over and a struggle ensued between them. Officials, citing police, said Anwar partially left the car and was pinned between the door and the driver’s seat as the teens allegedly put the vehicle in gear, the New York Post reported.

The car then lurched forward, causing Anwar to be fatally flung out as the car made a sharp right turn, causing it to roll over on its side and crash into two parked cars.

Officials arrived on the scene and found Anwar suffering from "life-threatening injuries," police said. D.C. Fire and Emergency Medical Services responded to the scene and transported the victim to an area hospital where he was pronounced dead.

National Guard troops who happened to be in the area pulled the two girls from the wrecked car. The teens are each charged with felony murder and armed carjacking and are being held in custody pending their next court date on March 31.

Fox News' inquiry to Bowser's office was not returned at the time of publication.