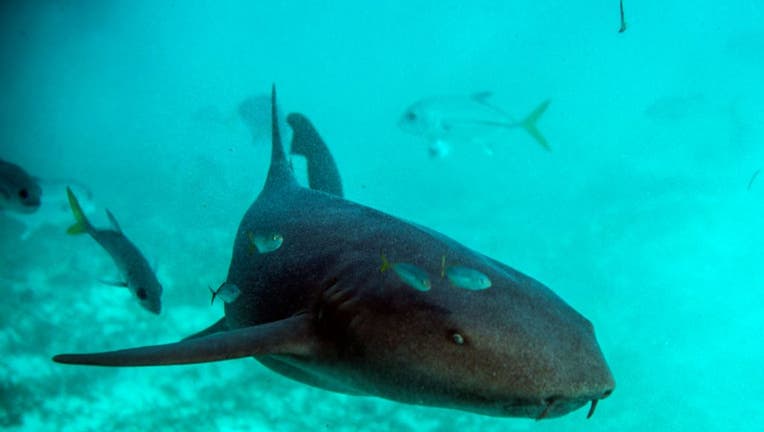 A Nurse Shark (Ginglymostoma cirratum) is seen at the Hol Chan Marine Reserve coral reef in the outskirts of San Pedro village, in Ambergris Cay, Belize, on June 7, 2018.

Nurse sharks attacked an 8-year-old British boy who was on vacation with his family in the Bahamas in what the boy’s father described as like a scene out of the movie "Jaws," according to a report.

Finley Downer was bitten on both legs by at least three nurse sharks after going into a lagoon where he saw the sharks swimming among a crowd of people, his father, Michael, told the Sun. However, the children reportedly didn’t realize the sharks were being fed scraps of food when they went in the water.

"There was so much blood," Michael told the outlet. "Bits of his leg were hanging off."

As Finley screamed for help, his 12-year-old sister managed to pull him out of the lagoon by his arms, the report said. He was rushed to a hospital for treatment and underwent a three-hour operation.

"My son could have been killed," Michael said. "It was like a scene out of Jaws."

However, tour operator Exuma Escapes told the outlet that the family went without a guide into a lagoon that was not used on its tour.

Finley and his family returned to their home in Kettering, a town in England. The boy has had to use a wheelchair and is expected to have permanent scarring on his legs, the report said.

Nurse sharks are bottom dwellers that are slow moving and won’t typically harm humans, according to National Geographic. However, the sharks have been known to bite humans with their strong jaws filled with thousands of serrated teeth in acts of defense.

GET UPDATES ON THIS STORY AT FOXNEWS.COM