The Christmas tree outside of the White House, also known as the National Christmas tree, is lit! FOX 5's Jacqueline Matter was there for it all and has more from President’s Park.

WASHINGTON - One of the most celebrated holiday traditions in the District took place Wednesday night on the Ellipse in President's Park.

The Christmas tree outside the White House, also known as the National Christmas Tree, is officially lit!

The holidays have arrived and what better way to kick off the season than at the National Christmas Tree lighting ceremony!

This year’s tree lighting was incredibly special as it marked the 100th anniversary of the tradition that began with President Calvin Coolidge. 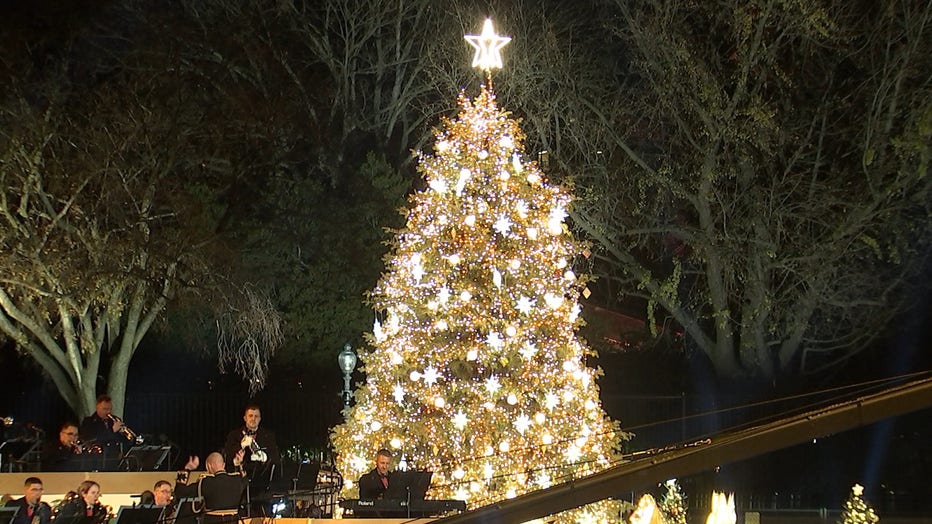 But the superstar of the show was the 27-foot white fir tree that came all the way from North Carolina and arrived in D.C. a few weeks ago.

Since then, it’s had a huge makeover with 64,000 lights strung around the tree.

President Joe Biden and First Lady Jill Biden flipped the switch to light up the nation’s tree which sits outside his front lawn at President’s Park.

The President also delivered a Christmas message to America.

"On this sacred season of joy and hope, let’s join together with confidence in the singular American belief that anything is possible because that’s what I see in the American people," President Biden said. "From the Biden family to yours Merry Christmas America, God bless you all, and may God protect our troops."

Christmas season has arrived now that the National Christmas Tree has been lit. The official lighting ceremony took place Wednesday on the Ellipse in President's Park.

The National Tree is free to visit and will be open to the public starting Friday, Dec. 2nd up until January 1st.