A man described by a prosecutor as a sexually motivated serial killer was convicted Thursday of murdering two women in the 1980s.

LOS ANGELES - A man described by a prosecutor as a sexually motivated serial killer was convicted Thursday of murdering two women in the 1980s.

A downtown Los Angeles jury deliberated for about three hours before convicting 67-year-old Horace Van Vaultz Jr. of first-degree murder for the July 16, 1981, strangulation of Selena Keough, a 21-year-old mother who was killed in San Bernardino County and dumped under bushes in Montclair, and the June 9, 1986, asphyxiation of Mary Duggan, a 22-year-old Reseda resident whose body was found in the trunk of her car in an empty parking lot in Burbank.

Vaultz testified in his own defense and denied any involvement in the killings.

The case marked the first criminal prosecution in Los Angeles County involving investigative genetic genealogy, in which detectives access commercial DNA databases, load DNA material from the crime and find a relative's match that can point toward a suspect and collect their DNA, then- Los Angeles County District Attorney Jackie Lacey said at the time.

Deputy District Attorney Beth Silverman told jurors in her closing argument the killings were "sexually motivated homicides" that were "committed by the same serial killer between 1981 and 1986," and she urged jurors to find Vaultz guilty of both killings.

The prosecutor said Vaultz has been "unable to explain any of the evidence tying him to the murders in this case," including DNA evidence found on or in the bodies of each of the women, who were discovered either fully or partially nude.

She cited "a ton of evidence" that points "only to the defendant."

"The defendant chose these victims," Silverman said. "The defendant is sitting here because he's a serial killer ... a sexual predator."

The deputy district attorney noted that DNA evidence -- which now links Vaultz to DNA from semen found in her mouth, vagina and anus -- was not available for testing when Vaultz was acquitted of the 1986 killing of 25-year- old Janna Rowe in Ventura County, noting that he cannot be retried for that crime but the jury can use it as "pattern evidence."

The prosecutor urged jurors to "hold him accountable" and to "tell him that his reign of terror ends now." 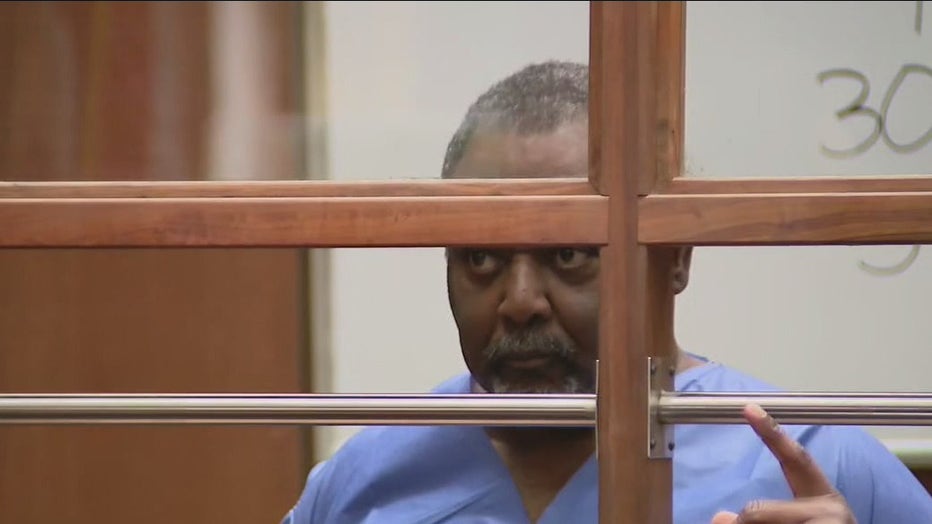 "If the evidence shows he's not guilty, which it does, do your duty," he told jurors, urging them to acquit Vaultz of both killings.

He acknowledged that his client -- an admitted swinger who cheated on his wives and girlfriends -- is "not perfect." But the defense attorney said that doesn't prove his client is a serial killer.

While on the stand, Vaultz told jurors he didn't remember Keough or Duggan and was not responsible for their killings or that of Rowe, whom he admitted that he knew.

"My semen means I may have had sex with the person. It doesn't mean I killed them," said Vaultz, a former Marine.

"I'm telling you I didn't kill anyone," he said, when questioned about DNA evidence.

Vaultz, by then a Bakersfield resident, was arrested in Inglewood during a November 2019 traffic stop by Burbank police in connection with the killings of Keough and Duggan.

Vaultz has remained behind bars without bail since his arrest, telling jurors that he has spent the past two years and nine months "courtesy of the L.A. County jail."

After the verdict, the prosecutor said it was a "great moment to see the end of this reign of terror."

She said it was "heart-wrenching" to hear graphic details during the trial about what had happened to her sister, and said she holds Vaultz responsible for her mother's death at age 54 from a massive stroke five years after her sister's murder.

Burbank police Sgt. Aaron Kay lauded the initial investigators who handled the Keough and Duggan killings, saying that evidence was preserved when "DNA wasn't even a thing back in 1986, 1981" but that DNA technology "caught up" by the time he was handed the case to re-investigate it.

He said there were "two times when my heart pounded in this case" -- first when he identified Vaultz as a suspect in the killings and then when he was in court to hear the guilty verdict being read.

"It's been incredible to be able to deliver something to the victims' families," the sergeant said.

One of the jurors, Tyler Razo, said after the verdict that he considered himself fortunate to be a part of delivering the verdict knowing that the victims' families had been "waiting so many years for this moment."

"It held a lot of weight. It was really impactful," he said.

Vaultz's attorney told City News Service outside court that what happened was a "tragedy" and said his heart goes out to family members of both the victim and the defendant.

"I think Mr. Vaultz got a fair trial," Hobdy said.

Vaultz is facing life in prison without the possibility of parole, with sentencing set Sept. 19.