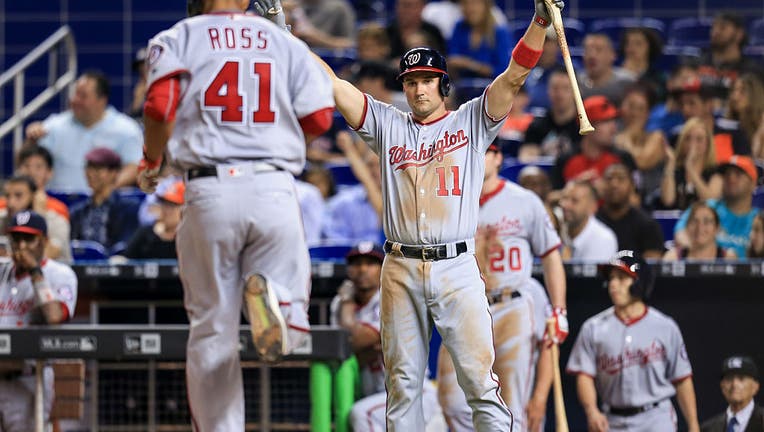 MIAMI, FL - APRIL 20: Ryan Zimmerman #11 gestures as Joe Ross #41 of the Washington Nationals crosses home plate to score on an RBI double by Bryce Harper during the third inning of the game against the Miami Marlins at Marlins Park on April 20, 2016

WASHINGTON (FOX 5 DC) - Washington Nationals first baseman Ryan Zimmerman and pitcher Joe Ross have decided not to participate in the 2020 season, the general manager announced Monday in a statement.

Mike Rizzo said the decision was made "for the personal health and safety of themselves and their loved ones."

Major League Baseball issued a 60-game schedule last week that will start July 23 or 24 in empty ballparks as the sport tries to push ahead amid the coronavirus following months of acrimony.

Each team will play 10 games against each of its four division rivals and four games vs. each of the five clubs in the corresponding division in the other league, according to details obtained by The Associated Press.

"We are one hundred percent supportive of their decision to not play this year, Rizzo said. "We will miss their presence in the clubhouse and their contributions on the field.”