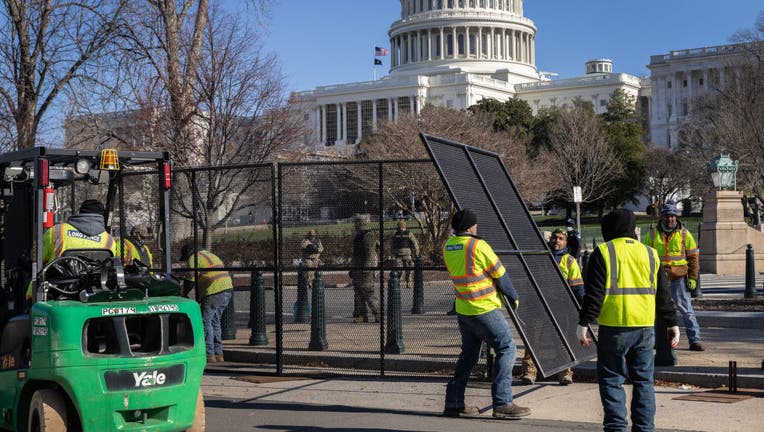 WASHINGTON, DC - JANUARY 07: Workers build a fence around the U.S. Capitol on January 07, 2021 in Washington, DC. Supporters of President Trump had stormed and ransacked the building the day before as Congress debated the a 2020 presidential election

WASHINGTON - The remaining fencing that has surrounded the U.S. Capitol since a mob of pro-Trump rioters stormed the building in January is likely to come down as soon as next week, three people familiar with the matter told The Associated Press.

Capitol Police removed an outer fence in March that had cut off a wide swath of the area to cars and pedestrians, blocking major traffic arteries that cross the city. An interior perimeter fence has remained around the Capitol, with signs warning that the area is closed to the public.

A plan being put in place by the U.S. Capitol Police Board calls for the fence to be removed by July 9, the people said. They could not discuss details of the plan publicly and spoke to the AP on condition of anonymity. The Capitol Police Board, which has oversight of the police force, is made up of the sergeants at arms of the House and Senate and the Architect of the Capitol.

The fencing has been a stark symbol of the fear many in the Capitol felt after the mob pushed its way past overwhelmed police officers, broke through windows and doors and ransacked the Capitol as Congress was voting to certify Joe Biden’s electoral win.

The fence has also become a political symbol, blocking off one of the country’s most visible public buildings as lawmakers and police work to come up with a plan to allow the public back inside but also keep the Capitol and members of Congress safe.

More than 500 people have been charged with federal crimes for their roles in the Jan. 6 riot and dozens of others are still being sought by federal agents. Thousands of National Guard troops who were sent to assist the Capitol Police with securing the complex left months ago.

Just a few weeks after the outer fence came down in March, a man rammed his car into a police checkpoint barrier, killing a Capitol Police officer. The driver was shot and killed after he ran his car into Police Officer Billy Evans and another officer, got out and lunged at police with a knife.

The Capitol Police Board asked congressional leaders in February to keep the fence in place until September, in part because investigators are tracking continuing threats against lawmakers and the Capitol complex.

On Wednesday, the House launched a new investigation of the Jan. 6 attack, approving a special committee to probe the insurrection.