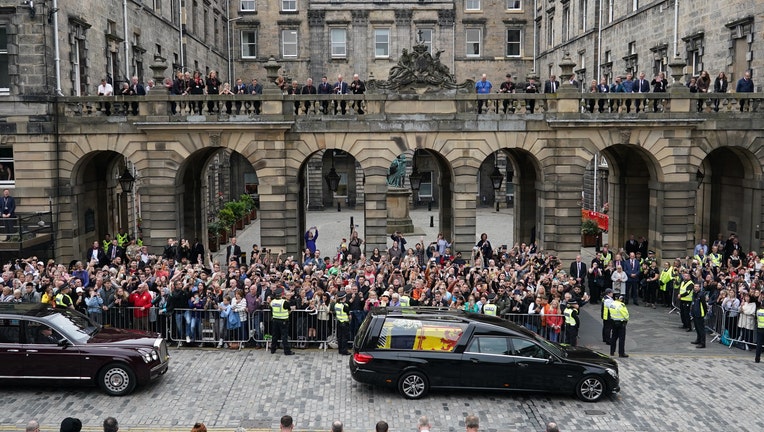 EDINBURGH, Scotland - In a slow, somber and regal procession, Queen Elizabeth II’s flag-draped coffin was driven through the Scottish countryside Sunday from her beloved Balmoral Castle to the Scottish capital of Edinburgh. Mourners packed city streets and highway bridges or lined rural roads with cars and tractors to take part in a historic goodbye to the monarch who reigned for 70 years.

The hearse drove past piles of bouquets and other tributes as it led a seven-car cortege from Balmoral, where the queen died Thursday at age 96, for a six-hour trip through Scottish towns to Holyroodhouse palace in Edinburgh. The late queen's coffin was draped in the Royal Standard for Scotland and topped with a wreath made of flowers from the estate, including sweet peas, one of the queen's favorites.

The procession was a huge event for Scotland as the U.K. takes days to mourn its longest-reigning monarch, the only one most Britons have ever known. People turned out hours early to grab a space by the police barricades in Edinburgh. By afternoon, the crowds were 10 people deep.

"I think she has been an ever-constant in my life. She was the queen I was born under, and she has always been there," said Angus Ruthven, a 54-year-old civil servant from Edinburgh. "I think it is going to take a lot of adjusting that she is not here."

Silence fell on the packed Royal Mile in Edinburgh as the hearse carrying the queen arrived. But as the convoy vanished from view, the crowd spontaneously started clapping.

"A very historic moment. I am quite speechless actually," said Fiona Moffat, a 57-year-old office manager from Glasgow. "She was a lovely lady. Great mother, grandmother. She did well. I am very proud of her."

When the hearse reached Holyroodhouse, members of the Royal Regiment of Scotland, wearing green tartan kilts, carried the coffin past the queen's youngest three children —Princess Anne, Prince Andrew and Prince Edward — and into the throne room, where it was to remain until Monday afternoon so staff can pay their last respects.

King Charles III and his Queen Consort Camilla will travel Monday to Edinburgh to join another solemn procession that takes the queen's coffin to St. Giles Cathedral on the city’s Royal Mile. There the coffin will remain for 24 hours so the Scottish public can pay their respects before it is flown to London on Tuesday.

The first village the cortege passed through was Ballater, where residents regard the royal family as neighbors. Hundreds of people watched in silence. Some threw flowers in front of the hearse.

"She meant such a lot to people in this area. People were crying, it was amazing to see," said Victoria Pacheco, a guest house manager.

The hearse carrying the coffin of Queen Elizabeth II, draped with the Royal Standard of Scotland, passing through Aberdeen as it continues its journey to Edinburgh from Balmoral. Picture date: Sunday September 11, 2022. (Photo by Paul Campbell/PA Images via Getty Images)

In each Scottish town and village the entourage drove through, they were met with muted scenes of respect. People stood mostly in silence; some clapped politely, others pointed their phone cameras at the passing cars. In Aberdeenshire, farmers lined the route with an honor guard of dozens of tractors.

Along the route, the cortege passed through locations laden with House of Windsor history. Those included Dyce, where in 1975 the queen formally opened the U.K.’s first North Sea oil pipeline, and Fife, near St. Andrews University, where her grandson Prince William, now the Prince of Wales, studied and met his future wife, Catherine.

Sunday's solemn drive came as the queen’s eldest son was formally proclaimed the new monarch — King Charles III — in the rest of the United Kingdom: Scotland, Wales and Northern Ireland. It came a day after a pomp-filled accession ceremony in England. 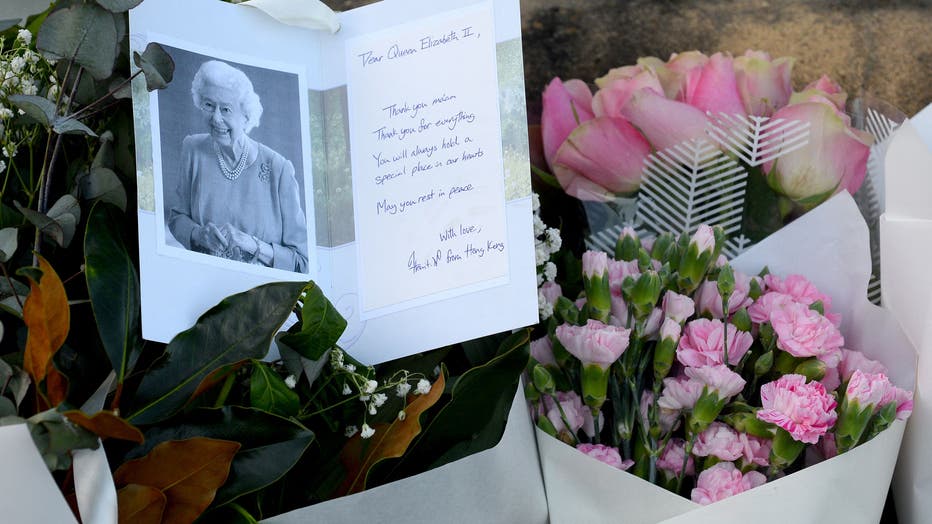 A message is seen among floral tributes outside the Government House in Sydney on September 11, 2022, following the passing of Britain's Queen Elizabeth II on September 8 aged 96. (Photo by Muhammad FAROOQ / AFP) (Photo by MUHAMMAD FAROOQ/AFP via Get

"I am deeply aware of this great inheritance and of the duties and heavy responsibilities of sovereignty, which have now passed to me," Charles said Saturday.

Just before the proclamation was read Sunday in Edinburgh, a protester appeared with a sign condemning imperialism and urging leaders to "abolish the monarchy." She was taken away soon afterward by police. Reaction to the protest was mixed. One man shouted, "Let her go! It’s free speech!" while others shouted: "Have some respect!"

Still, there was also some booing in Edinburgh when Joseph Morrow, Lord Lyon King of Arms, finished his proclamation with the words "God save the king!" 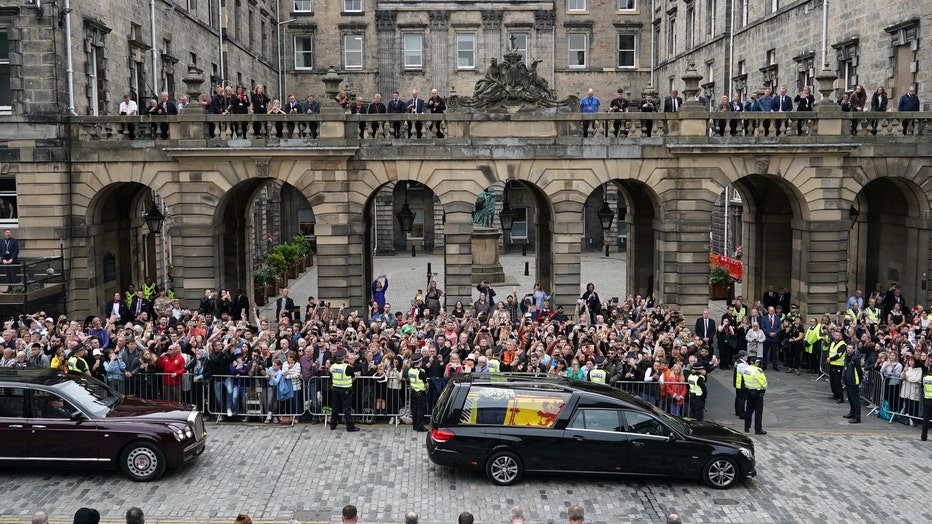 "There’s tens of thousands of people here today to show their respect. For them to be here, heckling through things, I think it was terrible. If they were so against it, they shouldn’t have come," she said.

Still, it was a sign of how some, including people in Britain's former colonies, are struggling with the legacy of the monarchy — and its future.

Earlier in the day, proclamations were read in other parts of the Commonwealth, including Australia and New Zealand.

Charles, even as he mourned his late mother, was getting to work at Buckingham Palace, meeting with the secretary-general and other representatives of the Commonwealth. Many in those nations are grappling with affection for the queen and lingering bitterness over their colonial legacies, which ranged from outright slavery to corporal punishment in African schools to looted artifacts held in British cultural institutions. 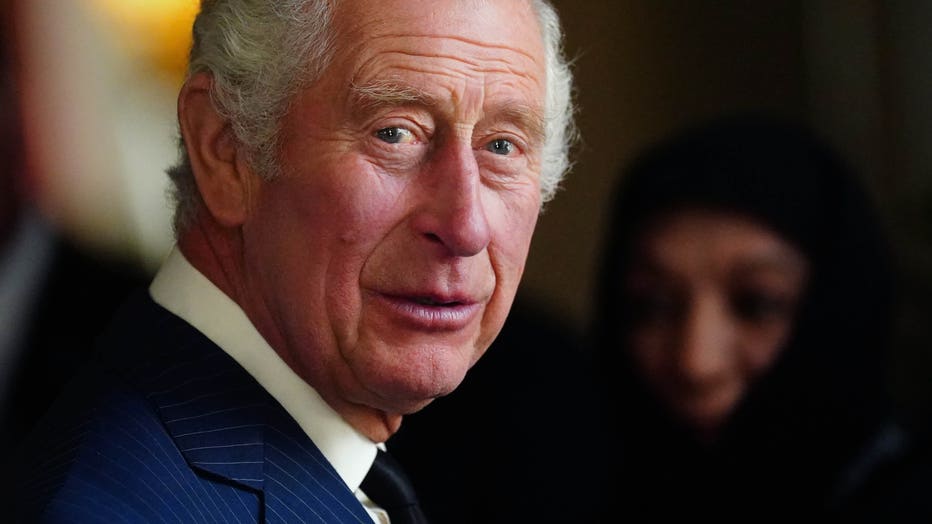 King Charles III during a reception with Realm High Commissioners and their spouses in the Bow Room at Buckingham Palace on September 11, 2022 in London, England. (Photo by Victoria Jones - WPA Pool/Getty Images)

Australian Prime Minister Anthony Albanese, who is in favor of an Australian republic, said Sunday that now was not the time for a change but for paying tribute to the late queen. India, a former British colony, observed a day of state mourning, with flags lowered to half-staff.

Amid the grief enveloping the House of Windsor, there were hints of a possible family reconciliation. Prince William and his brother Harry, together with their respective wives, Catherine, Princess of Wales, and Meghan, Duchess of Sussex, delighted mourners near Windsor Castle with a surprise joint appearance Saturday. 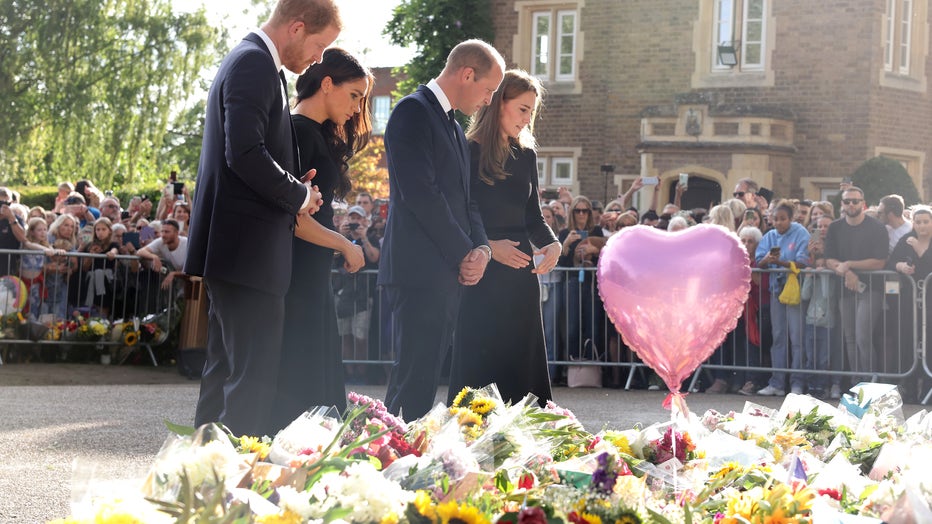 Catherine, Princess of Wales, Prince William, Prince of Wales, Prince Harry, Duke of Sussex, and Meghan, Duchess of Sussex on the long Walk at Windsor Castle arrive to view flowers and tributes to HM Queen Elizabeth on September 10, 2022 in Windsor,

The queen's coffin was taking a circuitous journey back to the capital. After it is flown to London on Tuesday, the coffin will be moved from Buckingham Palace on Wednesday to the Houses of Parliament to lie in state until a state funeral at Westminster Abbey on Sept. 19.

In Ballater, the Rev. David Barr said locals consider the royals as "neighbors" and try to treat them as locals when they spend summers in the Scottish Highlands.

READ MORE: Death of Queen Elizabeth II: What could change in the months ahead as Charles becomes king

"When she comes up here, and she goes through those gates, I believe the royal part of her stays mostly outside," he said. "And as she goes in, she was able to be a wife, a loving wife, a loving mum, a loving gran and then later on a loving great-gran — and aunty — and be normal."

Elizabeth Taylor, from Aberdeen, had tears in her eyes after the hearse carrying the queen's coffin passed through Ballater.

"It was very emotional. It was respectful and showed what they think of the queen," she said. "She certainly gave service to this country, even up until a few days before her death."