Tributes to Queen Elizabeth II that followed her death Thursday came from other monarchs, world leaders and from admirers around the world and in the nation's capital.

WASHINGTON - Tributes to Queen Elizabeth II that followed her death Thursday came from other monarchs, world leaders and from admirers around the world and in the nation's capital.

At the British Embassy in Washington, D.C., mourners gathered to pay their respects after hearing the news. A large Union Jack in front of the grounds was surrounded by flowers, notes and candles Friday morning.

The embassy is opening its doors to mourners Friday and agin on Monday for those who would like to sign the condolence book in memory of the queen. Guests can arrive from between 9 a.m. and 5 p.m. both days to sign. The British Embassy is located at 3100 Massachusetts Ave NW, Washington, DC 20008.

British Consulates across the U.S. will also be open to the public with condolence books to sign, the embassy tweeted.

President Joe Biden was informed of her death during a meeting in the Oval Office Thursday.

She was a "stateswoman of unmatched dignity and constancy who deepened the bedrock alliance between the United Kingdom and the United States," he and first lady Jill Biden said in a statement, saying she "defined an era." 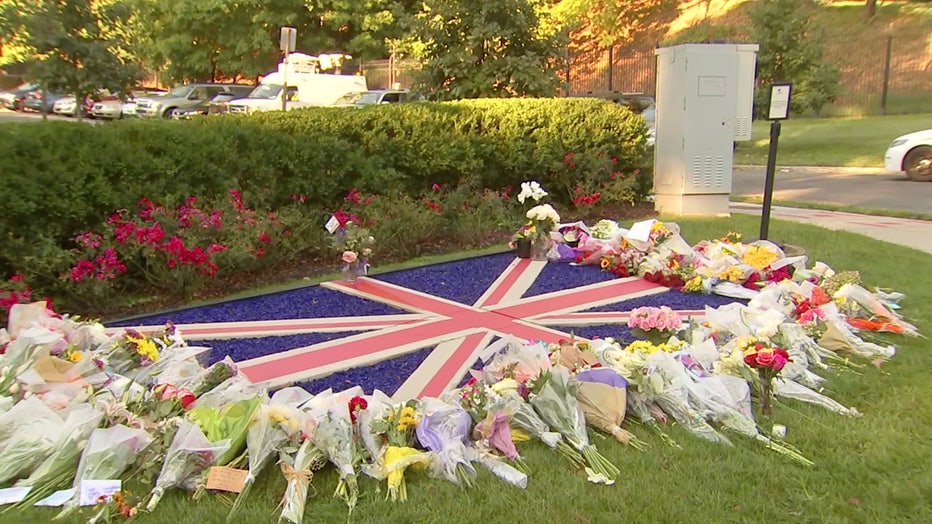 The Bidens later went to the embassy to offer condolences. "We mourn for all of you. She was a great lady," Biden could be heard telling embassy staff.

Biden also ordered flags at the White House and other federal buildings to be lowered to half-staff out of respect for the queen's memory.

In England, mourners flocked to the Buckingham Palace gates to honor the queen as the country prepares for a new age under a new king -- King Charles III.