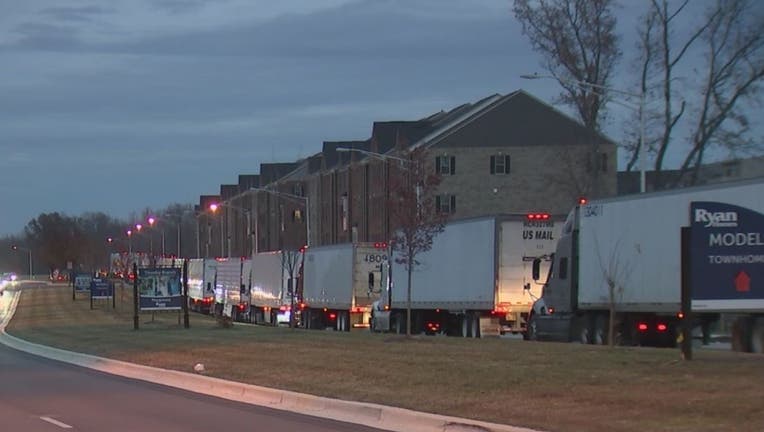 PRINCE GEORGE'S COUNTY, Md. (FOX 5 DC) - While residents in a Prince George’s County community are happy things have seemingly returned to normal after days of traffic headaches and safety concerns caused by tractor-trailers lined up in their neighborhood, county officials are working to hold the U.S. Postal Service accountable.

The tractor-trailers were parked for days right outside the Timothy Branch section of Brandywine waiting to get into a warehouse being used as a temporary USPS facility.

FOX 5 obtained a letter sent to USPS officials by the county’s chief administrative officer, blasting them over the trucks that had been sitting in the neighborhood.

The letter says the postal service created dangerous conditions and residents were upset with the disregard for the community.

"This was a situation that was completely created by them," said Rita Robinson, a resident in the Timothy Branch community. "They should have given us some type of forewarning."

"We can live the way we want to live. The way we’re supposed to be living without tractor-trailers and these semi-trucks out here disturbing our peace."

USPS officials say the reason for the back-up of trailers along Mattawoman Drive was due to a sudden and significant increase of inbound trailers at the distribution center.

In the letter to USPS, county officials say the trailers violated both state and county traffic laws.

"They just had a total lack of consciousness they were in a neighborhood," Robinson said. "You’re not on I-95, you’re in a neighborhood. People live here, people are walking their dogs, people have children we have had elderly people here."

Prince George’s County Police officers have been in the area for traffic control since last week, which the county says is costing them close to $42,000.

The letter also says the county’s office of permitting and licensing served a violation notice on that temporary facility in early November.

USPS released this statement to FOX 5:

The truck lines at the site and in the neighborhood has been resolved and we do not anticipate this situation will arise again.  If there is a surge in the number of trucks in the future the site now has access to an overflow lot to minimize any disturbances.  We appreciate the acknowledgment of the resolution and offer of assistance communicated in the County’s December 7 letter.