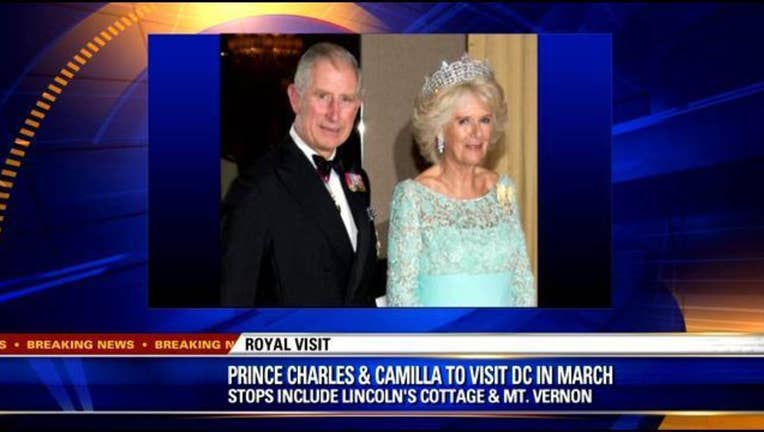 Prince Charles and Camilla will come to the nation's capital on March 17th, 18th and 19th.

They will visit Lincoln's Cottage and the Armed Forces Retirement Home which sit on the same grounds in northwest.

Charles and Camilla will also visit Mount Vernon and the National Archives.

Here is the official release:

At the request of the British Government Their Royal Highnesses The Prince of Wales and The Duchess of Cornwall will make a four day visit to the United States of America from 17th – 20th March 2015. Their Royal Highnesses will undertake a broad range of engagements to promote the UK's partnership with the United States in key areas such as sustainability and climate change, creating youth opportunities, encouraging corporate social responsibility and promoting historical and cultural links.

Their Royal Highnesses will mark major anniversaries in American history as they visit the nation's capital, Washington DC, on the 17th, 18th and 19th March. On Friday 20th March, Their Royal Highnesses will travel to Louisville, Kentucky where they will highlight the work being done by members of the local community and charitable organisations to protect, preserve and promote the health and well-being of the people of Louisville through community cohesion, clean air and food literacy initiatives.

2015 marks the 150th anniversary of the end of the American Civil War and the death of President Abraham Lincoln. In Washington DC, The Prince and The Duchess will visit the Armed Forces Retirement Home, which is set in the same grounds as the Lincoln Cottage, where it is believed Abraham Lincoln wrote the last draft of the Emancipation Proclamation. Named 'The Soldier's Home' when it was established in 1851, the Armed Forces Retirement Home is America's oldest veterans' retirement home. During their visit, Their Royal Highnesses will meet veterans from the Army, Navy, Air Force, Marines and Coastguard.

Their Royal Highnesses will also visit Mount Vernon, which was the home of the First President of the United States, George Washington, who presided over the convention that drafted the US Constitution. To further highlight the historical links between the UK and the US, The Prince of Wales will mark the 800th anniversary of Magna Carta during a visit to the National Archives where he will view the "Charters of Freedom" and the 1297 version of the Magna Carta, which is embodied in the American Bill of Rights and the Constitution.

Both Their Royal Highnesses' work and expertise in particular areas will also be highlighted during the programme. For more than four decades, The Prince of Wales has used his unique position to champion action for a sustainable future. The Prince will be honoured by the International Conservation Caucus Foundation (I.C.C.F.) with an award for Exceptional Leadership in Conservation. The I.C.C.F. works with leaders from both parties in the US Congress to bring together leaders at the highest level of government, business, and the NGO community to set the conservation and environmental agenda.

The Duchess of Cornwall has visited Rape Crisis and Sexual Assault Referral Centres in the UK and abroad, meeting victims of sexual violence and listening to personal accounts of their experiences during visits. Hearing their experiences has left The Duchess with a real desire to raise awareness about the issues facing those affected. In Washington, The Duchess will attend a meeting of the District of Columbia's Sexual Assault Response Team (S.A.R.T.) at the Department of Forensic Sciences in Washington D.C. S.A.R.T. is a coalition of 12 public and private community agencies working together to serve victims of sexual assault and to engage in educational activities to prevent sexual assault.

On Friday 20th March, Their Royal Highnesses will end their visit to the USA in Louisville, Kentucky. Central to The Prince of Wales's programme in Louisville is a symposium on health where His Royal Highness will give a keynote address to an audience of health practitioners, business, faith and community leaders about links between health and the natural environment. Highlighting the same theme, The Duchess will visit a food literacy project for young people at a local farm. The project also offers young people an opportunity to experience life on a farm in order to help increase their knowledge of the connection between food and farming.

The Prince of Wales has visited the United States of America in an official capacity 19 times since 1970 (21 including private trips). The Prince of Wales's last visit to the USA was in May 2011 when his programme included a call on President Obama at the White House and giving the keynote speech at a conference on sustainable agriculture at the Future for Food Conference at Georgetown University, Washington DC- http://www.princeofwales.gov.uk/media/speeches/speech-hrh-the-prince-of-wales-the-future-food-conference-georgetown-university

Media wishing to accredit for engagements in Washington and Louisville, please complete the online form at the following link: www.sa-meetings.com/SpringRoyalUSAVisit

Additional operational notes on engagements will follow in due course.