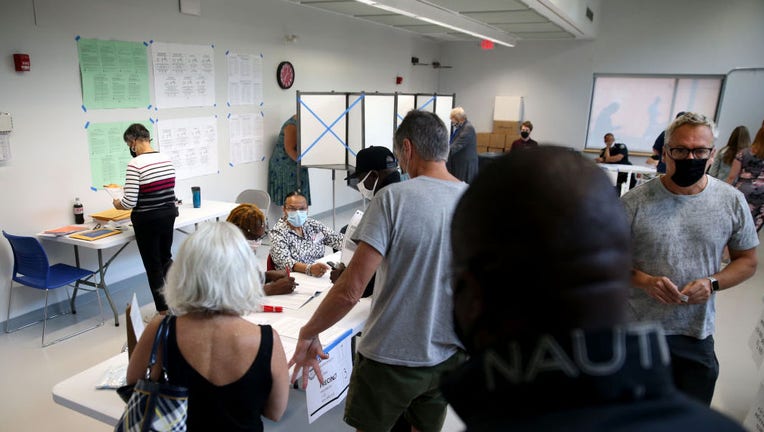 FILE-People on line to vote in a primary election in Boston, Massachusetts in 2021. (Photo by Jonathan Wiggs/The Boston Globe via Getty Images)

BOSTON - Geoff Diehl, a former state representative endorsed by former President Donald Trump, has won the Republican nomination for Massachusetts governor over businessman Chris Doughty, who was considered the more moderate candidate in the race.

The victory for Diehl sets up a general election contest against Democratic Attorney General Maura Healey, who would be the first openly gay person and the first woman elected governor of Massachusetts if she wins in November. The state’s current governor, Republican Charlie Baker, decided against seeking a third term.

Republican voters made Massachusetts the latest blue state this midterm season to nominate a Trump loyalist in a high-profile race, potentially dooming the party’s chances of winning in November. Voters in Connecticut and Maryland, liberal states where centrist Republicans have found some success in previous elections, also selected far-right candidates to go up against a Democrat in the general election.

Healey, whose only rival for the nomination dropped out of the race but remained on the ballot, will be the heavy favorite in November against Diehl in one of the most liberal states in the nation.

At her victory party Tuesday night before the GOP race was called for Diehl, Healey told cheering supporters that regardless of which candidate emerged as her opponent, "We know he’ll be out of touch with the values we stand for." Speaking of both candidates, she added, "They’ll bring Trumpism to Massachusetts."

Diehl, the favorite among state Republican Party delegates, has ties to Trump stretching to 2016, when he served as co-chair for Trump’s presidential campaign in Massachusetts. Diehl has also opposed COVID-19 protocols and hailed the Supreme Court ruling overturning Roe v. Wade.

Doughty said he supported some of Trump's initiatives but wanted to focus on challenges facing Massachusetts, which he said is increasingly unaffordable.

Diehl has come to embrace Trump's false claims that he won the 2020 election. Diehl said last year that he didn't think it was a "stolen election" but later said the election was rigged, despite dozens of courts, local officials and Trump's own attorney general saying the vote was legitimate. Doughty, meanwhile, has said he believes President Joe Biden was legitimately elected.

The challenge for Diehl in the general election is that support of Trump may play well among the party's conservative wing but could be a political albatross in a state where registered Republicans make up less than 10% of the electorate compared to about 31% for Democrats and about 57% for independents.

Diehl faced a similar struggle when he challenged Democratic U.S. Sen. Elizabeth Warren in 2018. He won a three-way Republican primary only to capture just over a third of the vote in the general election.

Massachusetts has a history of electing fiscally conservative, socially moderate Republican governors — including former Govs. William Weld and Mitt Romney — to provide a check on overwhelming Democratic legislative majorities. Baker, another Republican in that mold, has remained popular in the state.

A federal judge ordered Monday that an independent special master be appointed to review the records seized by the FBI during its raid of former President Trump's Mar-a-Lago home and ordered the Justice Department stop its own review of the material for investigative purposes. U.S. District Judge from the Southern District of Florida Judge Aileen M. Cannon ordered that the special master be appointed to "review the seized property, manage assertions of privilege and make recommendations thereon, and evaluate claims for return of property."

Healey has said she would work to expand job training programs, make child care more affordable and modernize schools. Healey has also said she would protect "access to safe and legal abortion in Massachusetts" in the wake of the Supreme Court’s decision overturning Roe v. Wade.

But Healey does face an oddball hurdle in Massachusetts — the so-called curse of the attorney general. Since 1958, six former Massachusetts attorneys general have sought the governor’s office. All failed.

The state has previously had a female governor, though she was appointed to the position. Republican Jane Swift served as acting governor after Gov. Paul Cellucci stepped down in 2001 to become U.S. ambassador to Canada.

Campbell would be the first Black woman to hold the office in Massachusetts if elected in November. She will face Republican Jay McMahon, a trial attorney who previously ran against Healey and lost.

Liss-Riordan pumped millions of her own money into her campaign — including $6.3 million in August alone. Healey earned an annual salary of more than $185,000 as attorney general.

Incumbent Democratic Secretary of the Commonwealth William Galvin, who is vying for an eighth term in office, defeated fellow Democrat Tanisha Sullivan, president of the Boston branch of the NAACP. Sullivan would have been the first Black person to serve in the post if elected.

There are also contested races in the Democratic primary for auditor and in the Republican races for lieutenant governor.

None of the state’s nine incumbent Democratic U.S. House members is facing primary challengers. There were two contested Republican primaries in the 8th and 9th congressional districts.