A street sign saying 'President Zelensky Way' was installed in front of the Russian Embassy Sunday.

Taylor also posted a 'Khashoggi Way' sign outside the Saudi Arabian Embassy in 2018. D.C. Council went on to officially change the street name in front of the embassy to Jamal Khashoggi Way in 2021.

"I couldn't afford a ticket to Kyiv to fill sand bags so I came here," said Scott Breeze, who was waving a flag. 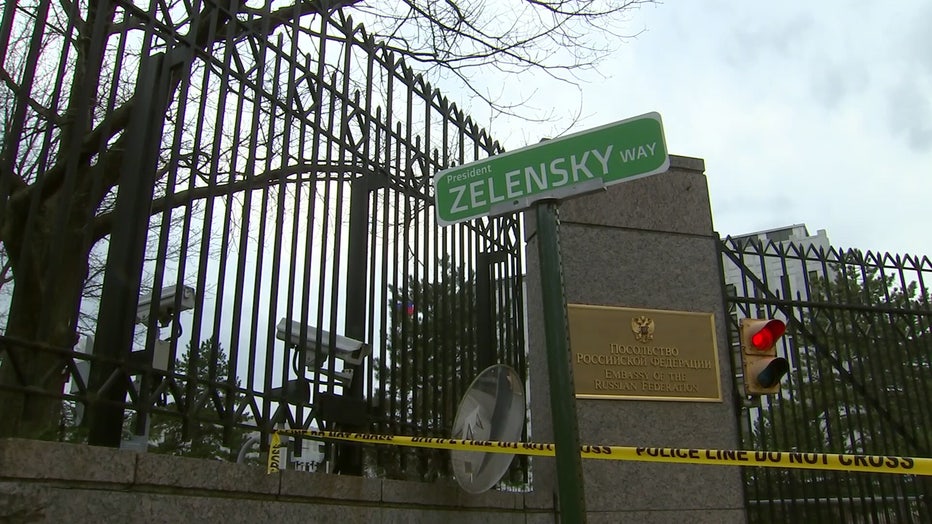 Even with a broken foot, Breeze stood outside the embassy in Glover Park for hours.

"I'm a Quaker and we abhor war in all its forms," Breeze said. "I just couldn't stand it anymore. If I saw one more thing on television my head was going to explode."

He described what he was doing as "one more drop of water on the stone that is Vladimir Putin."

His fellow flag bearer said they typically have more company at the embassy, but many had joined the rally with diplomats near the White House in support of Ukraine.

"There was one speaker after another," said Judea Lawton, who attended the rally. "And I was really proud of my country because my country stood up for Ukraine."

Lawton said she's been attending all the D.C. rallies for Ukraine that she can and sharing what she sees on social media. "I figured that the best thing I could do was take pictures and post them up to social media with #Ukraine," she said. "Because I didn't have many resources. But the resources I did have is a cell phone and social media."

After the rally, Lawton stopped by the Ukrainian Embassy. What was a nondescript brick building in Georgetown has become a rallying point, the sidewalk filled with flowers, messages and people taking photos.

"People who are leaving the flowers, they might not have the answers, but they want to show their support," Lawton said. "They want people to know, 'We're with you.'"