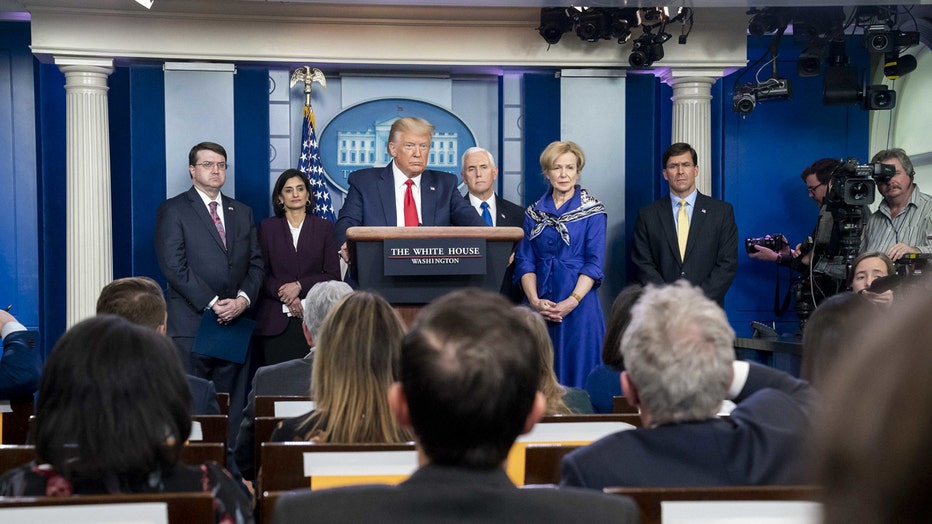 It's the biggest effort yet to shore up households and the U.S. economy as the pandemic and its nationwide shutdown hurtles the country toward a likely recession.

Senate Majority Leader Mitch McConnell unveiled the Republican opening offer to pump $1,200 direct checks to taxpayers, $300 billion for small businesses to keep idled workers on payroll and $208 billion in loans to airlines and other industries.

The GOP leader's effort builds on Trump's request for Congress to “go big.”

“We need to take bold and swift action as soon as possible,” McConnell said Thursday, announcing his plan on the Senate floor.

The 247-page McConnell CARES Act puts the leader's imprint on opening talks with Democrats in Congress as lawmakers prepare to work through the weekend to fast-track perhaps the most urgent legislative undertaking since the 2008 financial crisis.

The negotiations are certain to encounter difficulties ahead, despite the pressure on Washington to act. Trump's Treasury Secretary Steven Mnuchin and economic adviser Larry Kudlow will meet behind closed doors with Senate leaders. Democrats say the Republican plan does not go far enough and some Senate Republicans object to certain provisions.

“We are beginning to review Senator McConnell’s proposal and on first reading, it is not at all pro-worker and instead puts corporations way ahead of workers,” said a joint statement from House Speaker Nancy Pelosi and Senate Democratic Leader Chuck Schumer.

The GOP leader's plan aims to shore up households, businesses and the healthcare industry, which is bracing for an expected onslaught of patients falling ill from the virus that causes COVID-19.

Additionally, the McConnell bill would provide $300 billion to small businesses, with loans that would eventually be forgiven for employers who use them to meet payroll expenses.

To shore up industry, McConnell's plan would provide $208 billion in loans and loan guarantees to distressed sectors, including $50 billion for commercial airlines, $8 billion for air cargo carriers and $150 billion for other eligible businesses, but those loans would have to be paid back.

Businesses would also be allowed to defer payment of the 6.2% employer payroll tax.

The proposal also includes a specific provision to allow the Treasury secretary to “participate in the gains,” through stock options or other financial instruments, of companies that receive federal aid.

At the same time, caring for the expected surge of sick Americans is a priority for Congress.

The McConnell proposal contains a raft of health care provisions — including permanent liability protection for the manufacturers of respirators and other desperately needed medical gear to handle the pandemic.

At the consumer level, McConnell's bill would put into federal law the commitment from insurers that coronavirus tests will be cost-free to policy holders. Additionally, the bill requires coverage of coronavirus vaccines, at no cost to patients.

For the health care industry, the bill would establish a new Medicare payment for treating COVID-19 patients. It would suspend through the end of this year a 2% Medicare payment cut to providers under previously set budget restraints.

Pelosi and Schumer said in statement they looked forward to working with Republicans "in a bipartisan way to deliver for the American people as soon as humanly possible.”

The Democratic leaders said, however, their priority is to “make sure all workers are protected from the loss of a paycheck or that no family falls into financial ruin because of this pandemic.”

The Democratic leaders called on Trump to ramp up production of medical supplies and rapidly erect temporary field hospitals under new authorities he has invoked in the Defense Production Act.

Keeping paychecks flowing for idled workers as jobless claims skyrocket is a top priority for both Republican and Democratic plans emerging from Congress.

But how best to send direct payments to Americans — as one-time stipends, ongoing payroll support or unemployment checks — is a crucial debate.

Some GOP senators panned the idea of direct one-time checks, preferring instead to use the federal dollars to keep workers who are asked to stay home on business payrolls.

“What I want is income, not one check,” said Sen. Lindsey Graham, R-S.C.

Meanwhile, industries of all kinds are lining up for help. The total price tag is sure to grow beyond $1 trillion, lawmakers said.

Trump has already signed into law a $100 billion-plus bill to boost testing for the coronavirus and guarantee paid sick leave for millions of workers hit by it. Earlier, Trump signed an initial $8.3 billion package from Congress.