NEW DELHI - President Donald Trump said Tuesday he's optimistic about the prospects of inking a trade deal with India despite moves by both sides that created doubt about the ability to reach an agreement.

Trump emerged from a pair of meetings with Indian Prime Minister Narendra Modi citing progress toward a deal but offering no details. Trump had made clear before the trip that hammering out a long-sought trade deal with India was unlikely during the two-day trip. 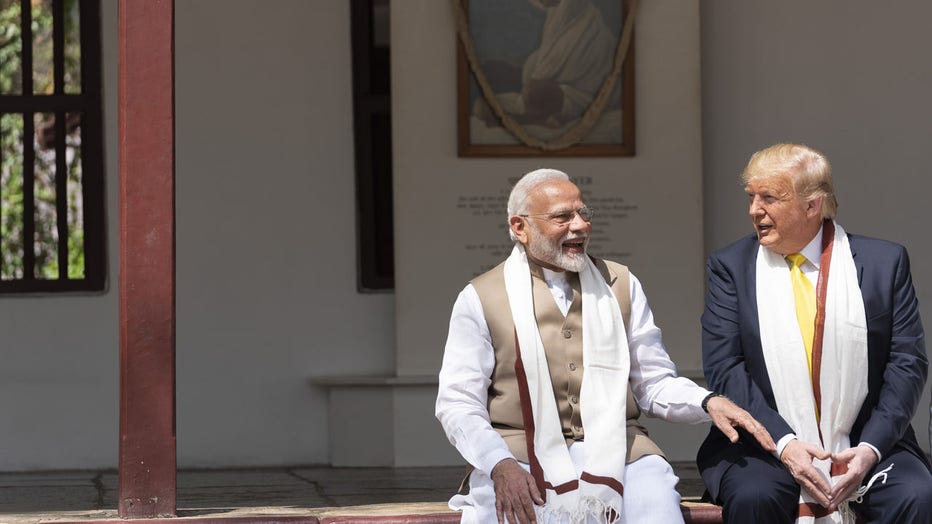 “Our teams have made tremendous progress on a comprehensive trade agreement and I'm optimistic we can reach a deal that will be of great importance to both countries,” Trump told reporters on the second and final day of his whirlwind, 36-hour, first official visit to India.

The day began with an elaborate welcome ceremony in front of the grand Rashtrapati Bhavan Presidential Palace in New Delhi, continuing the pomp and pageantry the Indian government had lavished on Trump a day earlier.

Cannons fired as the president's armored car, nicknamed "The Beast," rolled through the palace gates accompanied by a parade of red-uniformed guards on horseback. The ceremony included hundreds of military officials, marching with instruments and swords, as well as an official greeting by India's president and Modi.

Elsewhere in Indian capital, new violence erupted a day after at least seven people, including a police officer, were killed and nearly 100 others reportedly injured in clashes between hundreds of supporters and opponents of a new Indian citizenship law that provides fast-track naturalization for some foreign-born religious minorities but not Muslims, police said.

Protesters in several areas of northeast Delhi defied orders prohibiting the assembly of more than five people and threw stones and set some shops and vehicles on fire, a police officer said. Some homes were attacked with rocks.

Trump and Modi made no reference to the violence as they briefed reporters about their meetings. In addition to the claimed progress on trade, Trump announced that India had signed a deal to buy more than $3 billion of advanced military equipment, including helicopters.

And hecontinued to shower praise on Modi for the opulent and colorful welcome spread across three cities.

“The last two days were amazing in every sense of the word," Trump said as he and Modi briefly addressed reporters after the first of their two meetings. Trump described the trip as “unforgettable,” “extraordinary” and an expression of “love."

He also told Modi that people who attended a mega-rally held in his honor at the world's largest cricket stadium in Ahmedabad — part of an elaborate welcome for a president who revels in pomp and pageantry — were really there for the Indian leader.

“They love you in India and that's a good thing.,” Trump said.

Modi said he was thankful Trump visited despite the presidential campaign underway in the United States. Trump has said the short India visit was partly due to presidential politics.

“I know that it’s busy time for you in the United States,” Modi told Trump. "But despite that, you accepted an invitation to visit India. I welcome you and your delegation.”

Modi said talks to ease trade tensions between their countries would continue. Those tensions escalated after Trump imposed tariffs on Indian steel and aluminium exports. India responded with higher penalties on U.S. agricultural goods and restrictions on medical devices, prompting the U.S. to strip India of its decades-old trade preferences.

At a meeting with Indian business leaders, the Republican president abandoned the tradition avoiding domestic political squabbles while traveling abroad and criticized the Democratic candidates who are competing for the right to challenge his reelection bid in November.

Trump also addressed the coronavirus outbreak, which has begun to spook the U.S. stock market. Trump said the administration has asked Congress for an additional $2.5 billion to help get the U.S. ready “just in case something should happen” and to assist countries he says are ill-equipped to deal with the virus' spread on their own.

Trump planned a solo news conference and was attending an opulent state dinner before he boards Air Force One later Tuesday for the return flight to Washington.

Eyes also will be on whether Trump will criticize Modi over the new citizenship law, which has raised fears that the country is moving toward a religious citizenship test. Trump typically refrains from publicly rebuking world leaders for human rights abuses during his overseas trips. He spoke at length on Monday about measures his administration had taken to combat the threat of “radical Islamic terrorism.”

Trump has talked about “working productively with Pakistan” — India’s arch nemesis — to reduce homegrown terrorism in Pakistan, a comment that was sure to irk many Indians.

During Monday's protests, police fired tear gas and used canes as they charged at the protesters in several districts of New Delhi. The rival groups hurled rocks at each other and set some houses, shops, vehicles and a gasoline pump on fire. Police closed access to two metro stations in the area.

Trump, however, was far away from the violence. And everywhere he went, he encountered streets lined with cheering Indian citizens, troops of traditional dancers and roadways lined with posters and billboards celebrating his visit. Trump and first lady Melania Trump also went on a stunning sunset tour of the famed Taj Mahal.

On Tuesday, the couple participated in a wreath-laying ceremony at Raj Ghat, a memorial to Mohandas Gandhi in New Delhi at the site where the famed Indian independence leader was cremated after his assassination in January 1948.