Police said three people were injured when people in a white sedan opened fire in the Six Flags parking lot around 7:50 p.m. and then sped off.

"Based on the initial investigation, a white sedan entered the Six Flags parking lot and drove toward the front entrance of the park," Gurnee police spokesperson Shawn Gaylor said in a statement.

"Suspects exited the vehicle and began shooting at another individual in the parking lot. The suspects got back in the white sedan and quickly left the area," Gaynor said.

A third victim, whose age was not released, was grazed on the shoulder and declined medical treatment, the spokesperson said.

Police said "numerous" agencies helped to clear out the park, but Gaylor noted that it "appeared to be a targeted incident outside the park."

"This was not an active shooter incident inside the theme park," Gaylor said.

An employee said the park was crowded with families, trying to enjoy the last bit of summer before school resumes.

Brian Donda was on the phone with his son Charlie at Six Flags when the gunfire erupted in the parking lot Sunday evening.

"All of sudden they heard what sounded like fireworks go off. Then they went running," Donda said. "They latched onto a family and followed them. They jumped over a fence and hid behind a hill. They were trying to find a way to find to get out of the park."

Finally, they spotted firefighters who waved them to safety.

A witness who was at Six Flags Great America in Gurnee describes the chaos after gunfire erupted in the parking lot Sunday night.

Videos posted to social media show a large police presence. Some videos said people ran between rollercoasters and jumped over fences to flee the park. Other videos show people running and screaming.

Anthony Shannon, 17, was working at the front gate and urged everyone to come back into the park.

He said he didn’t fear for his safety but is glad no one else got hurt when the crowd ran for safety, "I felt like they paid to have fun, not to leave and get shot."

At around 11 p.m., a police truck over a speaker drove around the perimeter saying repeatedly: "Attention, anybody in the park. This is the police. There is no threat, it is safe to come out."

"Whether they're going to school, work, or Six Flags, Americans should not have to fear for their lives because of gun violence. I’m grateful for the quick action by first responders in Gurnee last night, but we have more work to do to address the gun violence epidemic," said Sen. Dick Durbin, D-Ill. 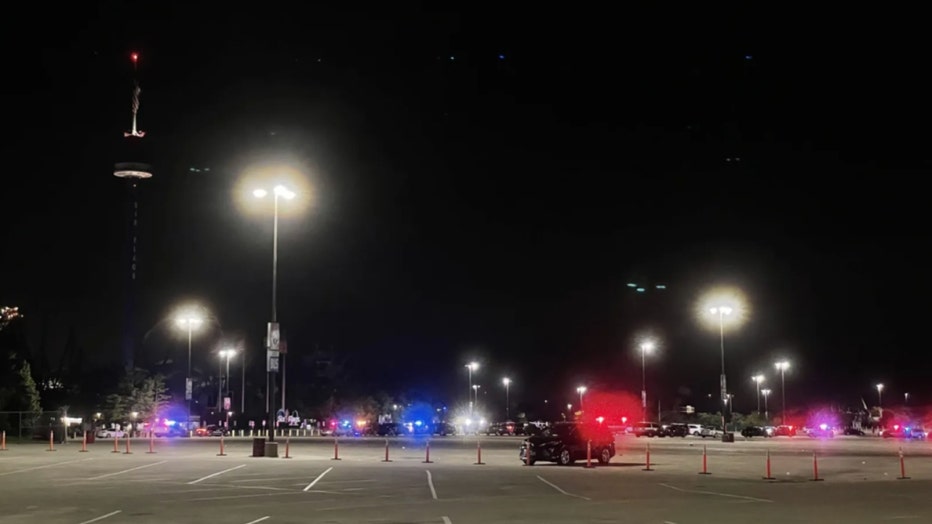 Three people were shot Sunday night in the parking lot of Six Flags Great America in Gurnee. Numerous police agencies responded to reports of a shooting and helped to evacuate the park. (Kaitlin Washburn/Sun-Times)

Rep. Brad Schneider called the shooting "unacceptable" and said more needs to be done to "tackle the root causes" of gun violence.

"We can and must find a way to keep our kids safe in schools, people safe in their houses of worship, and families safe whether at amusement parks, community parades or simply walking down the street," Schneider said in a tweet.

Six Flags released a statement saying the park would be open on Monday.