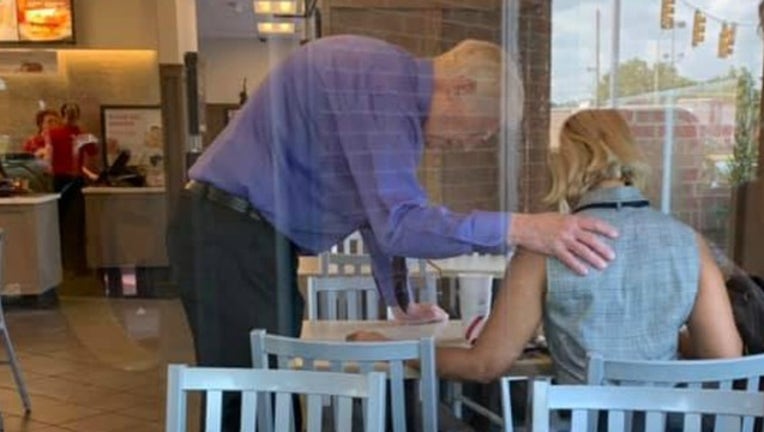 MADISON, Ala. (FOX 5 Atlanta) - - An Alabama photographer recently witnessed something incredibly touching while eating at Chick-fil-A.

On July 5, Brittany Calden of Brittany Calden Photography was at the Chick-fil-A on Highway 72 in Madison, sitting in the play area with her daughter, when she spotted long-time employee Stephen Spray talking to a customer.

Calden noticed the two because “Mr. Steve” put his hand on the woman and prayed over her. That's when she snapped a quick picture, which she later shared on Facebook.

“As a photographer, it was instinctual for me to document this moment,” Calden told FOX 5’s Katie Burk. “I find myself always searching for things that move me, and this was one of those instances.”

Calden said she was driven to tears as she watched Mr. Steve praying over the woman.

"He's a hard worker and was wiping tables minutes before approaching the lady."

Turns out, Stephen "Mr. Steve" Spray is a staple at the Madison Chick-fil-A, having worked there for nine years.

“Mr. Steve never fails to walk up to your table and ask how your day is going and always tried to make your day better than it was before you saw him,” Calden said.

The kindhearted employee told Calden he didn’t know the woman, but the “Spirit led him to pray for her,” calling it a blessing.

“That’s not unusual,” Spray told her. “I work at a place where if I’m led to pray for someone, I’m able to do that and I’ll do it right on the spot. People need prayer, encouragement, and love. That’s what we try to do here.”

Calden said there’s something special about the Madison Chick-fil-A and the people who work there.

“As soon as we enter we are greeted by our names, it’s seriously unreal,” she said. “They hold my baby when my hands are full and go out of their way to make us feel good. The other day we were leaving and an employee ran for the door to hug my daughter before she could leave. They don’t do what they do for recognition. These employees have hearts that are led by Jesus and its evident every time we enter their restaurant.”

Calden said Mr. Steve had no idea she was taking his picture and he prayed for the woman because that’s simply the type of person he is.

“And because of who he represents, Christ,” she said.

WAGA reported this story from Atlanta.