Four Philadelphia Eagles fans who say they were injured last January have filed a lawsuit against the Washington Commanders.

WASHINGTON - Four Philadelphia Eagles fans who say they were injured last January have filed a lawsuit against the Washington Commanders.

The incident happened at FedEx Field in Landover during a 20-16 loss against the Eagles on Jan. 2.

A gaggle of fans gathered by the railing to greet players as they exited through the tunnel, and when Eagles quarterback Jalen Hurts walked by, the railing collapsed causing multiple people to fall to the ground. 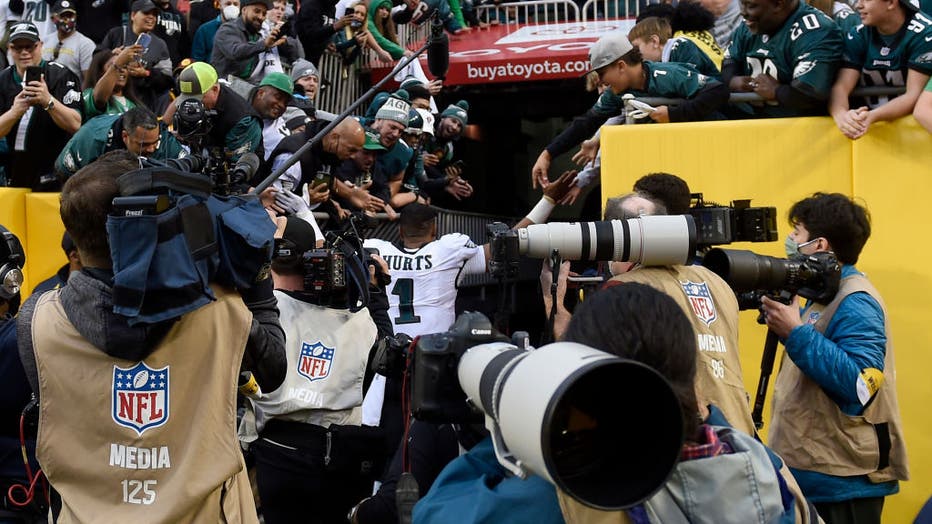 LANDOVER, MARYLAND - JANUARY 02: A railing collapses as Jalen Hurts #1 of the Philadelphia Eagles walks through the tunnel celebrating with eagles fans following the win over the Washington Football Team 20-16 at FedExField on January 02, 2022 in Lan

"Through the initial shock, my first reaction was to assist those involved," Hurts wrote in a letter to the Commanders. "However, while I displayed a calm composure, I understand the severity of what happened and am extremely concerned for the well-being of the fans and media. As a result, I would like to know what safeguards the NFL and the Washington Football Team are implementing to prevent this from ever occurring in the future."

At the time, the Commanders released a statement saying everyone involved was offered a medical evaluation and no one was seriously hurt. But according to the lawsuit filed on Friday, the four plaintiffs are from New Jersey.

Each is seeking $75,000 for loss of income, medical expenses, and pain and suffering.

So far, the Commanders have not responded to the lawsuit.

Check out the full complaint below: